"I cannot think of Haverford College without thinking of Aryeh Kosman," says Jim Friedman '67. "He embodied the very best of Haverford: brilliant scholarship, deep concern for his students and colleagues, warmth, humor, and an awareness of our collective strengths and foibles. He was my teacher for four years and my friend for almost 60 years. For the last 15 years, we met frequently to discuss philosophy. Sadly the meeting scheduled for today will never take place. Our community has lost one of its luminaries. We will all miss him."

John Parachini '82 remembers Prof. Kosman's course on Aristotle as "an epic experience for any philosophy major in the 1980s. His guidance on how to read Aristotle’s Metaphysics helped me understand the importance of light as the medium for perceiving the world visually and consciously." Tom Navratil '82 took the same class as a philosophy major. "I'd put it among the top tier of all my classes at Haverford for both challenge and benefit."

Larry Tint '67 says he was not "a philosophy guy" while at Haverford, preferring math and science and seeing the humanities as "a necessary step towards graduation." While on that path, he took two classes with Prof. Kosman. "He was the quintessential Haverford professor, completely dedicated to enlightening his students, bringing an enormous knowledge base to the classroom, understanding the needs and limitations of his students, always available and willing to give his time graciously, allowing for divergence of opinion, and doing all of this with a sense of humor worthy of a stand-up comic. I, Haverford, and the world have lost a truly remarkable man." In a Facebook post, Hannah Turner '13 described Prof. Kosman's freshman writing seminar as "a joy," noting how she was "touched that he remembered me at my reunion. I was lucky to learn from him."

An article in the Spring 1976 issue of Haverford's alumni magazine pointed out that philosophy courses were among the College's most popular, with "historians, biologists, and musicians" vying to enroll. That the department was attracting so many non-majors was fine with Prof. Kosman. "Our purpose," he said at the time, "isn't to train philosophy scholars. It's to try to continue the tradition of Rufus Jones, to educate people in a moral way." Profiled again nearly a dozen years later, he said that "(h)uman beings are born with a deep desire to know. Curiosity knows no limits. We must think through an issue and follow the truth wherever it may go. There is no pleasure as deep as thinking."

Services will be held at 11 a.m. on Friday, June 18, at Temple Beth Hillel-Beth El, in Wynnewood, PA. All mourners in attendance will be required to wear masks. 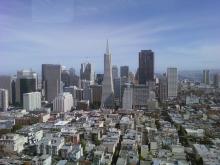