The field of ancient cookery, as a scholarly and popular publication topic, has a long and proud tradition. Study of the subject works like field archaeology, in so far as the scholar must dig up (literally or figuratively) what information there is, recognize its usually egregious gaps, and fill them in as best he or she can. The latter is commonly achieved via comparison with better preserved examples from related fields or sites, with a lot of (usually) logical ratiocination to sew it all together. In this regard, the field archaeologist has a slightly easier row to hoe, in that irremediable gaps in the information can simply be left as unanswerable questions. Scholars of ancient cookery, in contrast, usually hope to recreate the cuisine of antiquity. Here a gap in the information can be disastrous, resulting in concrete, sludge, or flavors so abominable that not even the Romans could figure out a way to enjoy them. This powerful caveat must be kept in mind, since it explains why so much speculation, substitution, and invention are both justified and necessary. If we adhere strictly to available information, we would end up only with translations of terse ancient texts, few of which provide enough information to allow anything appealing to be cooked today. 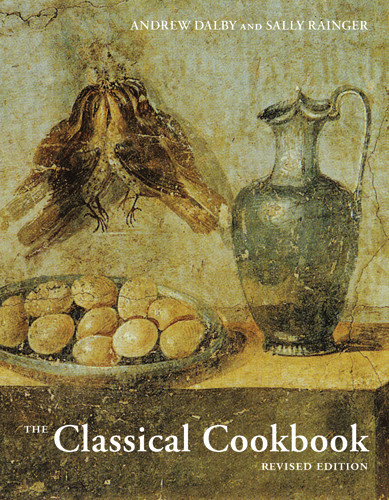 The authors of this book are well aware of the challenges, of course. The division of labor between them exploits their respective expertise, the translations of ancient literature being by Andrew Dalby and the actual cookery the work of Sally Grainger. As far as functioning as an actual cookbook is concerned, therefore, this book is primarily the work of the latter. Grainger’s credentials certainly qualify her for this endeavor. She is a chef in her own right, as well as a historian of ancient bakery (in the substantive form of the word).  Most of this review will concentrate on her contribution.

Dalby’s challenges are not to be underestimated, however. He works from notoriously obscure and incomplete texts. Many of his sources were not trying to act like a modern cookbook in the first place, but those that were are hardly better. Ancient cookery authors knew contemporary readers were already perfectly familiar with the “obvious” things under discussion, so they commonly leave out key details, or else they use obscure words whose meaning would have been common knowledge in antiquity, but that can only be guessed from context today. This makes it difficult to turn their words into usable recipes. This is even true of the most famous ancient author in this field, “Apicius,” whose gastronomic text vaguely purports to be something like a “how-to” cookbook, whereas modern readers almost invariably find that “how-to” is precisely what this author does not include. For a translator, this challenge is compounded by the fact that Apicius refers to equipment and ingredients not familiar or not readily available today. Dalby fills in gaps as well as possible, making many of the translations obviously anachronistic, but if, for instance, a “saucepan” is the closest a modern reader’s kitchen will come to the vessel an ancient author requires, in a practical book like this it makes sense for Dalby to use the word “saucepan” in his translation. From the point of view of a purely academic scholar, therefore, many of Dalby’s translations are somewhat grating, but it should be easy for a more broad-minded reader to appreciate the method in the madness.

The rest is up to Sally Grainger. The book is logically organized for a reader hoping to cook up some dishes based on ancient prototypes. The introductory chapter lays out a number of the challenges faced in the overall endeavor, as well as the methods by which they will be addressed in the recipes to follow. Readers actually wanting to try out the recipes should read this introduction carefully, because many of the ancient texts are so fragmentary that following them literally would be folly. Grainger explains a number of substitutions, presumptions, and technical procedures that can be exploited today to make tasty dishes clearly associated with the ancient “recipes,” as well making clear many of the ways where a modern cook simply has to improvise.

There is, most importantly, a discussion of ancient cooking equipment—or lack of it—and ingredients. One key caveat is the fact that most ancient cooking worked approximately like modern Mediterranean cooking—without the more recently important ingredients—in that the most common foods would never be the subjects of recipe books in the first place. While modern cookbooks abound, they are hardly needed for assembling many of the most famous and popular Greek or Italian recipes, which commonly have just a handful of ingredients, and whose preparation can be taught by a mother to a daughter in a matter of minutes. Apicius, in particular, was thinking in more elaborate gastronomic terms, ignoring commonplace foods like grilled fresh fish drizzled in oil and vinegar. One partial solution to this incomplete picture of ancient cooking is to exploit literary sources that were never intended as cookbooks, such as off-hand mention of foods in, say, Homer. These references give a clearer sense than Apicius of what was eaten commonly, although with little hint of actual recipes. Grainger more or less invents plausible substitutes from scratch, which she can do validly enough, given her knowledge of ancient ingredients and procedures.

Of particular interest are the ancient ingredients now no longer popular. Some of these are predictable, most notably the family of fish sauces now commonly called “garum.” There was, indeed, a Roman fish sauce called “garum,” but there were others too. They were made differently and called different things, and, Grainger notes, were also generally employed differently, either in cooking or at the table. Thai fish sauce is the common substitute, a useful if simplistic surrogate for a more complex situation that we can no longer reconstruct in detail (and, in the case of some of the sauces, probably wouldn’t want to).

Other spices popular then and obscure now can be found, often, in larger urban centers. These tend to be bitter herbs, no longer popular because more appealing alternatives have become available in the meantime. The bitter herbs—lovage most saliently, but rue too—and other strong flavors—such as asafoetida, for good or ill—make good sense in the same way that black pepper or extremely “aromatic” cheeses do today, and, indeed, black pepper is a common companion to the archaic spices in ancient Roman cooking too. Used in due proportion and associated with complementary flavors, the bitter herbs provide brightness, piquancy, and character, so long as one minds the author’s terse warning not to overdo them. One does wish something could be done to resurrect the long lost spice “silphium,” but that seems a vain hope. Grainger does cite an available substitute, but it sounds inadequate and she wisely veers away from recipes that particularly depend on it.

The majority of the book, naturally, consists of actual cookery, in the form of an amusing if imaginary romp through classical culture. Chapters are based (very loosely indeed) on popular themes, including the banqueting upon the homecoming of Odysseus, a wedding feast in the Hellenistic era, Republican-era rural cuisine, foods that might be associated with Roman Britain (fair enough, given the nationality of the author) and “Supper at the Baths” (essentially “eating out”). Many of these themes are extremely imaginative, with scant direct association between the ancient texts quoted and the recipes that appear in the chapters, but it should be obvious to any reader that expecting scientific scholarship would be the fault of the critic. Ancient cookery is a theme in this book, not a science, and that is validly the most anyone could do with the topic.

Each topical chapter paints a charming picture of the imagined setting for its recipes, and then individual quotations are used as the launching pads for the culinary excursion that ultimately results in something a modern reader can actually cook. Here is one example, from the chapter associated with Odysseus. First, there is a quotation from the Odyssey that mentions the concept of “relish.” There is no recipe, of course, not so much as a single ingredient. Then there is the elder Cato’s generic recipe for olive relish from the Late Republican era of Rome. Cato’s recipe probably lists most or all of the ingredients needed to make a relish, but not proportions and not enough detail for the real recipe to be reconstructed specifically. But the list is evocative, and Grainger then assembles her own modern recipe for olive relish, using most of the ingredients Cato notes, with some substitutions and presumptions to span the lacunae. The result is a relish whose association with Homer is close to nil, but tasty, and with enough pedigree from antiquity somehow or other to make it worth discussing at a dinner with pleasant company.

The more Roman the topic, the more likely Apicius is to be the source—Grainger is a published scholar on Apicius specifically—and therefore the more closely Grainger’s modern recipe is likely to resemble what the ancient source actually says. If one is a stickler for greater accuracy in the resemblance between modern and ancient, then the later period chapters are the obvious place to focus. Perfection isn’t possible, but an amusing enterprise and a tasty meal certainly are.

I have just one caveat: being a vegetarian, my own impression is that this book heavily favors “brains, guts, and dead things.” That is not a slur on the authors, but rather it accurately reflects ancient tastes in these matters, at least for the special kinds of foods that an ancient author would regard as worth writing about at all. If, in contrast, the reader is inclined to think in terms of “sweetbreads, kidneys, and meat,” this book will be considerably more appealing as a practical tool in the kitchen. Even so, there is still plenty of interesting cookery for the likes of me, especially baked dishes with interesting ways of exploiting eggs, honey, grape must, pine nuts, or cheese. Enjoy.

Larry Ball (lball@uwsp.edu) is Professor of Art History at the University of Wisconsin at Stevens Point. His publications concern the Domus Aurea in Rome (Cambridge University Press, 2003) and Pompeii (AJA July 2013), where he has been assistant director of the Pompeii Forum Project since 1994. His fondness for homemade Pizza is notorious.