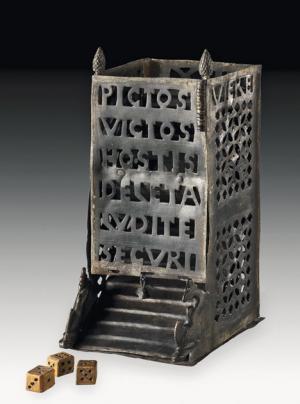 In an effort to enliven the classroom for both myself and my introductory Greek students at Wake Forest University, I set myself the goal of doing something different on each of the five days a week that we convened.  I could repeat activities from week to week, but every week had to comprise five distinctive lesson plans.  Ideally, of course, these would be fun as well as instructive for students, and offer motivation beyond their grade in the course.  While admittedly not much of a fan of games myself (students have had to correct me on the rules of children’s games), adapting simple games like Bingo, Jeopardy!, and Headbands to practice morphology and translation has turned out to be the most effective way for me to keep my students on their toes. What’s more, the ludic setting has often provided a much-needed stress relief for students. It also eases the terror of getting things wrong in front of their peers.  This approach has led in unexpected directions (not all of them fruitful), and I share with you here a few of those that have proven most enjoyable and productive for students and instructor alike.

Bingo.  This can be adapted in all sorts of ways, but my go-to strategy was to work from the reading that students had been assigned to translate for homework and practice identifying the new or tricky forms therein.  I used to make individual Bingo cards myself for each student—what was I thinking?—but then I realized that the easier and more useful tactic was to have students make them and then exchange cards with one another.  If the focus of that week was on aorist active morphology, I’d ask students to identify nine aorist active forms in their homework and write one Greek form in each blank space on the Bingo card.  Having exchanged their cards, I’d then call out, in no particular order, the different forms used in the reading (e.g. “3rd-person plural aorist active indicative”; “aorist active infinitive”) until every student had found three in a row on their card.

Headbands.  You know the game where you stick a piece of paper on your forehead and have to ask questions of the people around you to figure out who or what is written on the paper?  I’m told that this is called Headbands.  I adapted this specifically for practicing principal parts and wrote a variety of forms of different common verbs on individual sticky notes (concentrating on the 3rd through 6th principal parts).  One student at a time would draw one and place it on their forehead.  Their classmates would first tell them the meaning of the verb and next the particular principal part on their forehead (e.g. “perfect active”) . Asking questions as necessary (e.g., “Is it a strong aorist?”), the student would then say aloud the Greek form written on their note.

Jeopardy!  This is hardly a ground-breaking idea for a language class, but worth mentioning nonetheless.  I’ve used this in two ways, but the basic format is the same for each.  Since my Greek classes are typically small, I usually only divide students into two or three teams, but multiple groups could certainly work.

Scenario 1: I create a Jeopardy! board with point values from 200 to 800 and categories including Morphology, Translation, Syntax, and Mystery Grab-Bag.  While that board is accessible to students, I create a separate document for myself with the questions for each point value and category (with the 800-point questions being the most challenging).  For the Mystery Grab-Bag category, I throw in a range of random questions (e.g., “What are the two different primary 2nd-person singular middle/passive personal endings?”).  After a coin toss to see who chooses their question first, each team collaboratively comes up with and presents an answer to their chosen question (without using their notes or textbook).  If the first team gets it right, they are awarded the points, but the other team(s) also have to come up with an answer to the same question, since they can “steal” the other team’s points if they didn’t answer their question correctly.  To add further incentive, I also usually stipulate that each team is responsible for checking the other team’s answer and determining whether or not it is correct (and why or why not).  Repeat until all the questions have been answered correctly.

Scenario 2: On this model, teams of students assemble their own questions for their competitors.  Since each question is worth a single point, it probably doesn’t even count as a form of Jeopardy!, but oh well.  Drawing from a broad swathe of chapters and readings we’ve covered in past weeks, each team selects the sentences that they think will be the most challenging for the other team to translate without consulting their notes.  In addition, they identify forms and syntactical constructions for the other team to parse together with their translation.  Each team then takes turns asking, answering collaboratively, and checking each question.

Mad Libs.  This works best for extended passages of at least 3 lines.  I rewrite the passage, leaving blanks for a variety of forms.  I then create a separate list of forms for the students to generate (e.g., “a noun-adjective pair in the nominative plural”) for those blanks.  In pairs, students start by generating the list of forms, and then write their newly-produced forms in the blanks in the passage.  The final step is translating the entire passage and hopefully producing an absurd narrative (e.g., “The small horses steal goddesses from the marketplace”).

Speed Dating.  I arrange the students in two rows to face one another and give each pair a sentence to translate together in a fixed amount of time (usually two or three minutes).  When time is up, one of the rows shifts in the same direction so that everyone now has a new partner.  Each pair then shares the sentence they translated with their previous partner and makes corrections as needed (again, keeping to a time limit).  When it’s time for the partners to switch again, each pair gets a new sentence to work on.  The whole process is repeated until everyone has had a chance to work through each sentence, at which point I ask individual students to share their translations of particular sentences with the entire group.

Telephone.  In pairs, students are assigned a particular English sentence to translate into Greek (alternatively, they come up with the English sentence themselves, making sure to only include those constructions and forms they’ve learned by that point).  They write only their Greek version of the sentence on an index card, which is passed to a neighboring pair.  Now each pair is tasked with translating the Greek sentence into English.  They write that English sentence on a separate card, which goes to the next pair, who have to translate it into Greek.  The process is continued until each pair is confronted with either a Greek or English version of their original sentence.  As a class, we then debrief and discuss whether and how each pair’s original sentence was altered in transmission and why these changes occurred (e.g., errors in tense, syntax misconstruction, etc.).

There you have it: some low-stakes, high-energy language games that will hopefully infuse your students with that agonistic Hellenic spirit! 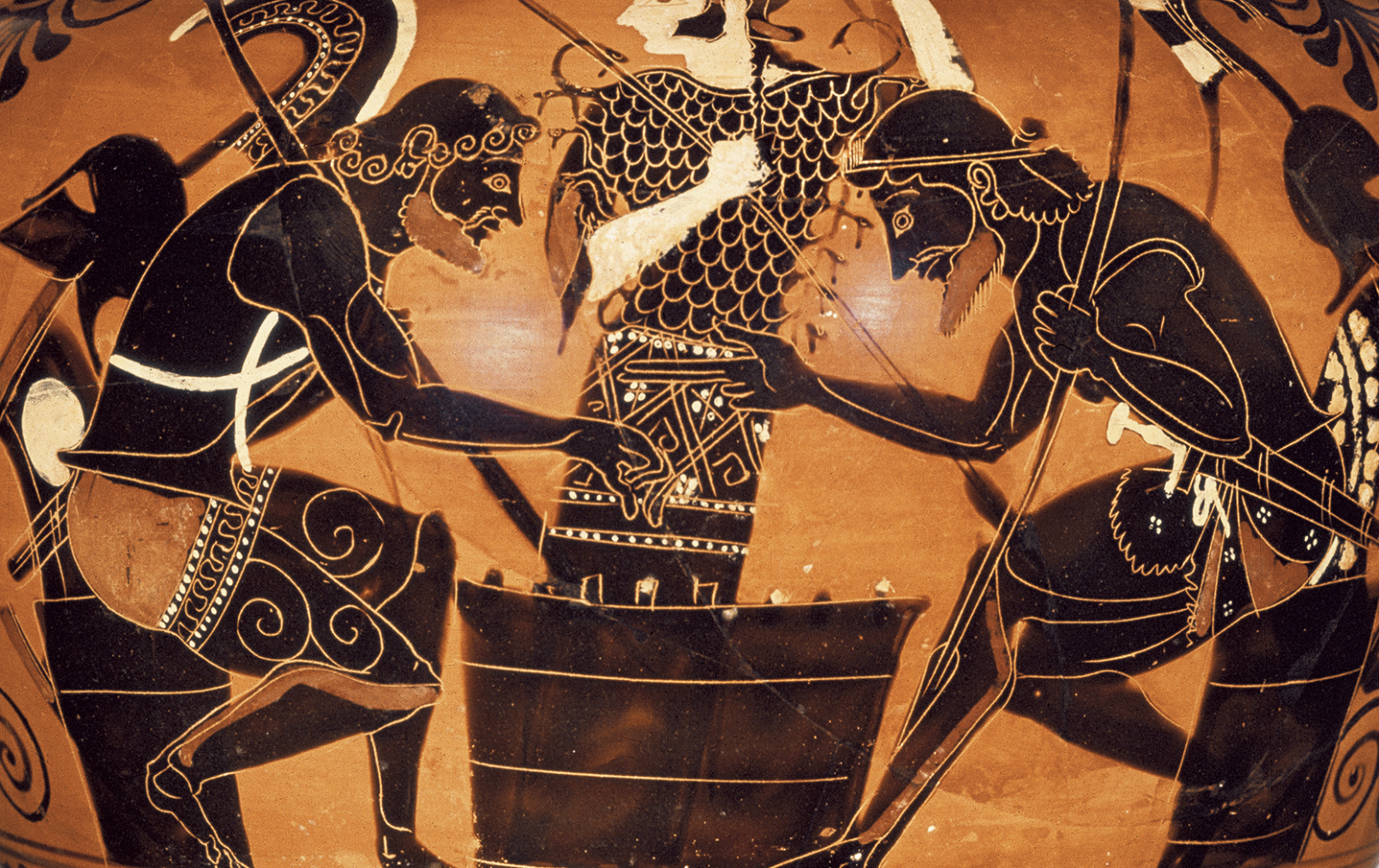 Attic black-figure neck amphora of Achilles and Ajax playing a board game as Athena oversees them (ca. 510 BCE and now at the Getty) (Image under a CC0 via Wikimedia and the Getty Open Content Program).

Header Image: A photograph of the Vettweiss-Froitzheim Dice Tower, Roman, 4thC CE (now at the Rheinisches Landesmuseum Bonn) (Image via Wikimedia and is in the Public Domain).

Amy Lather is Assistant Professor of Classics at Wake Forest University. She works on Greek poetry and Greek aesthetics: from oozing wounds in Sophocles to dirt and dust in Homer to the representation of variety (poikilia) in archaic and classical art and literature. She'll take your understanding of the whole The Dress controversy to a new level.

10/22/2021
Blog: Dissertation spotlight: A Tale of Four Cities: Exploring Classical Reception in Modern Hebrew
As I strolled one day in the old center of Tel Aviv, I entered the house of Haim Nachman Bialik, the Hebrew...
10/18/2021
Blog: Dissertation Spotlight: The Shape of an Empire: Environments, Economies, and the Nature of the Seleucid State
The Seleucid empire has long stood on the fringes of Classical scholarship. Following the conquest of the east by...
10/11/2021
Blog: A Latinx Casina
In the Spring of 2021, as her undergraduate UIC Honors College Capstone project, my student Luana Davila adapted...
10/08/2021
Blog: Ancient Worlds, Modern Communities: Greek Tragedy for Audiences Today
The Ancient Worlds, Modern Communities initiative (AnWoMoCo), launched by the SCS in 2019 as the Classics...
10/04/2021
Blog: Contingent Faculty Series: A Conversation with Dr. Stephanie Kimmey
Our sixth interview in the Contingent Faculty Series is a virtual conversation between Dr. Theodora B. Kopestonsky...
END_OF_DOCUMENT_TOKEN_TO_BE_REPLACED