Blog: A Day in the Life of a Classicist and Game Designer 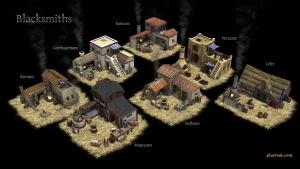 A Day in the Life of A Classicist is a monthly column on the SCS blog, celebrating the working lives of classicists. In this month’s edition, we speak with Hamish Cameron, who is a digital humanist, game designer, and lecturer in Classical and Medieval Studies at Bates College.

I’m an ancient historian who specializes in the Roman Near East, ancient geography, and borderland theory. I am beginning to branch into the reception of the classical world in contemporary pop-culture, especially games and movies.

As well as an academic, I’m a practicing analog game designer. Most of my hobbies are related to games in some way, so I’m always learning about how different games work and how different people encounter them. The close relationship between game design and classroom pedagogy means that thinking about games also bleeds into the classroom. As a game designer, everything I encounter, view and experience, becomes fodder for a game, and in many ways, also becomes fodder for pedagogy.

Prof. Cameron at work at his desk at Bates College.

Many of my twitter followers would say that my non-professional time focuses a lot on carbohydrates; mosaic IPAs and donut burgers (or Christmas chili and sopapillas, if they followed me during CAMWS 2018). Twitter is definitely my most consistent distraction/ritual/gadget/software, though it can benefit academics in broadening our social networks. My social media circles include classicists and historians, but are mostly from the world of game play, design and analysis.

Although you may not guess it, there’s a lot of crossover between game writing and academic writing. There is a lot of general interest among game folk for historical material and among historical folk for game material. That mix of perspectives and approaches, but with a common interest in gamification, makes my Twitter an interesting space for productive micro-procrastination and mental refreshing. I also see Twitter as a useful tool for demystifying the reality of academic work and stripping it of pretension. When I think of something that I wish people knew about classics and classicists, I tweet it. Twitter can be a powerful medium for academic outreach and communication, in both for specific fields and for academia generally.

A screenshot of Cameron's Twitter feed, which talks about beer, donuts, Classics, and game design in a way that makes it accessible.

I’m relatively early in my career and at a liberal arts college, so most of my work days during the semester are occupied with teaching, grading, meeting students, and preparing for class. I can usually sneak some writing in around the edges. This year I’m moving into a phase where most of my classes are repeats, so there will be less intense prep and more refreshing and tweaks. I’m also experimenting with online scheduling tools to make my office hours more efficient. I try to be done with my academic work by dinner time so that I can spend time with wife and cats and/or playing and designing games.

Cameron is the designer of a Roleplaying Game (RPG) called: The Sprawl: Cyberpunk Roleplaying, powered by the Apocalypse.

A notable exception to this is grading. I like to complete grading in a quick, solid chunk so that its off my plate and back to the students as quickly as possible. When I see one of these days coming, I’ll usually spend some time in the previous day clearing as many distractions as possible from my queue and setting up small achievable tasks that I can complete in the gaps between teaching or meetings. Even a small moment of completion can make a day full of meetings feel personally productive. I’ve been experimenting with using Trello (a web-based project management system) to help manage this kind of stuff.

I usually mark the end of the working day by taking a few minutes to mentally plan out the next day and anything I need to do at home, on my commute, or over breakfast. This usually looks like making lists, either by hand on scrap paper or on a digital notepad that I can access from my phone, like Trello or Google Docs.

If I’ve been working at home, I try to change tack entirely. I often have a video game on the go (although right now I don’t); switching from a textually-oriented work mode to an entirely different kind of mental exercise with a visual basis makes a good marker for me.

My writing environment changes around, depending on the time, my mood, and the part of the process. I’ve traditionally done most of my writing at home, but if I need a change of pace, I’ll walk to a cafe for the walk, for the coffee, and for the change of scenery. I especially like editing in a cafe or well-lit and well-tapped bar. I mostly type in the first instance, but edit by hand on printed copies. That editing process usually generates some handwritten original material, of course. There is never a full disconnect between the digital and the analog world.

Much like Twitter, cats can be both helpful and harmful to the writing process. Just ask Cameron about his home office.

I haven’t done very much collaborative writing yet, but I do like working with editors on my text, especially in game writing where collaborative developmental editing is far more of part of the process. I definitely see more collaborative projects in my academic future, especially in my digital classes, where I tend to work closely with technical specialists. I enjoy low-stakes writing or drafting where it feels like you’re making a lot of progress, but I also like the harder stuff where you puzzle over a primary source for hours with a plethora of books and pdfs spread across your desk top and desktop to craft a single paragraph or footnote. I also quite like the editing process, although some time when you’re deep in a chapter with a lot more to go, it can be daunting.

This all applies equally (mutatis mutandis) for academic writing and game writing. My least favourite kind of writing is writing examples of play for game rules. Turning something that is relatively trivially demonstrated in person into a clear, precise, natural-sounding written version of spoken English is occasionally interesting, but gets repetitive very quickly.

If I’m writing new material I usually work to electronic music--right now I have a trance track going. The beat helps give focus and momentum and the lack of complex lyrics prevents lyrical distraction. Although for particularly thorny intellectual problems I turn off the music. For tedious writing tasks, like making minor corrections, formatting footnotes or what have you, any music that I know well helps break the monotony.

In the midst of all this: what gets me up in the morning? Creating. Creating knowledge as a researching academic and creating experiences as a game designer and a teacher. In reality, most of my days are focused on creating experiences: scaffolding environments so that the people who step into those environments are able to engage in enjoyable and intellectually valuable processes.

Hamish Cameron is Lecturer in Classical and Medieval Studies at Bates College.

Header Image: Some of the blacksmith buildings for the video game 0 A.D (Image via Wikimedia under a CC BY-SA 3.0 by Wildfire Games).

Ayelet Haimson Lushkov is an Associate Professor in the Department of Classics at the University of Texas at Austin. Her research is on the role of literature and literary devices in shaping political and historical thought, and more broadly lies at the intersection of literary criticism, cultural studies, politics, and history. Her special interests include Livy, Roman historical narratives (prose and poetry), Roman political culture under the Republic, literary and social theory (esp. social anthropology, New Historicism), classical reception.

07/01/2022
Blog: Ancient Worlds, Modern Communities: Contemporary Responses to Greek Myth and Tragedy through Drama, Film, and Visual Art
The Ancient Worlds, Modern Communities initiative (AnWoMoCo), launched by the SCS in 2019 as the Classics...
06/29/2022
Blog: “Deeply rooted in history”: Teaching abortion ancient and modern in a post-Roe v. Wade world
With weary hearts, we consider with you what Classics can do in the face of Dobbs v. Jackson Women’s Health...
06/27/2022
Blog: Teaching in a Time of Anti-Asian Violence: Reflections on Asian & Asian American Experiences in Classical Studies, Part 1
This two-part series reflects upon AAPI experiences in Classical Studies. Part 1 is catalyzed by the author’s...
06/25/2022
Blog: Roe v. Wade, the GOP, and echoes of Augustus: Reproducing fascism
I guess I should say “thank you.” Gratias vobis ago. Thank you to the Republican Party’s long game, a partisan...
06/20/2022
Blog: Paternalism and the “Good Slave” in the Speech for Phormion and the Legacies of Slavery
In a discussion of the concept of the “good slave” in her book Reconstructing the Slave: The Image of the Slave in...
END_OF_DOCUMENT_TOKEN_TO_BE_REPLACED