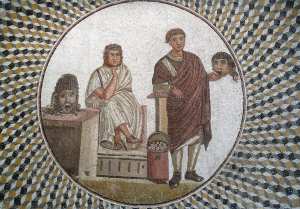 Our second post from the SCS’ Committee on Ancient and Modern Performance (CAMP) explores how to bring a translation to life on the stage through interdisciplinary work.

Classics is an amazingly fertile ground for interdisciplinary collaboration. As I like to say to colleagues, we are the personification of the liberal arts – where else does one find historians, philologists, art historians, archaeologists, environmentalists, and more, all in one department? Trying to determine a sabbatical project, I landed on the notion of taking my first stab at translation, and I decided that I wanted to tackle Plautus’ Truculentus, a play featuring a clever meretrix (prostitute) deftly playing three relatively foolish men. I wanted to find a quick way to get that translation out into the public. I discovered that collaborating with the Theatre Department at Butler University was precisely the way for me to do that.

Despite being a scholar of Roman comedy, I had not really interacted much with the Theatre faculty. We’re in different colleges within our university. Opportunities to meaningfully interact with colleagues in other colleges come with all sorts of unexpected hurdles. Luckily, I had met a few of members of the Theatre faculty through some committee work, and, looking forward to a post-tenure phase of my career at Butler, I reached out to see if they would be willing to take a chance at devoting space in their lineup for an obscure Roman comedy two years down the road.

The timing was crucial here. I had a sabbatical to start the process of developing my translation. In the following Spring, we field tested it with an extracurricular staged reading from some Theatre students in the Spring semester, inviting students from Theatre and Classics to attend. Since the goal was a stageable translation, I needed to hear the words coming from actors to think about where the phrasing was awkward or bulky, and I needed to think about the way that a mixed audience would respond. Conversations following the reading were very interesting. For example, our discussions around how to translate a word like scortum demonstrated the challenges of loaded words – should we avoid the cultural baggage of “whore” in favor of something like “hussy” or “tart”? Or do we need to preserve the objectification implied in the Latin term?

With a workable script heading into summer, I sat down with the Theatre faculty to start to thinking about the practicalities of the show itself. The nice thing about working with Theatre faculty on a production is that there are people who professionally think about costuming and set-design to help bring the show to life. For my part, I wanted to preserve some aspects of the ancient theatre practice while being sensitive about ways that that tradition might be alienating to a modern audience – we needed to fill the fifty-seat black-box theatre each of the three nights. We settled on an aesthetic that blended the modern and the ancient. There would be live incidental music, timed to scenes that would have been sung in the original play. The actors would dress in modern clothes with a draped element to nod to a generic sense of ancient clothing. There would also be masks designed by a Butler alumna who works professionally in theatre designing masks!

More importantly, for logistical reasons, our cast was all female. The relatively few men in the Theatre Department were all in the production of Our Town, and we embraced the opportunity to flip the script on the ancient practice of all-male casts. InTruculentus, where the powerful characters are women and the buffoons are men, seemed to be an ideal play for such a cast. Because the actors playing the role of the meretrix and her trusty ancilla (enslaved handmaid) were women while the male characters were not aligned with actors of the same gender, the male characters came off as fairly cartoonish while the female characters did not. It was hard to sympathize with the plight of the men who were being played by the meretrix, and this enabled greater space for a sense of female empowerment from the play itself. The women, despite their marginalized social status, could flourish as they called the shots about who would or would not have access to their space.

Performance is a tremendous research tool for thinking about the ways that ancient drama and the modern world collide. Through the Butler performance of Truculentus, I was challenged to think about the ways that masks and costuming guides audience expectations, whether or not actors modulate their voices according to the gender of any given character. I was pushed to think about how an audience might respond to an atypical play where the desires of the young men are played off one another by a conniving/enterprising meretrix, and I had the opportunity to see my translation come to life, leaving the potentially stale world of the page to become what a dramatic text is always meant to be – a living, breathing performance!

Header Image: Mosaic in the middle is a theatre scene: a sitting poet is holding a parchment, on his right is a theatre mask, on his left a box filled with scrolls. The second character leaning on a column and holding a mask is a comedian. 3rd c. CE, House of Masks, Sousse, Archaeological Museum of Sousse (Photo by Ad Meskens and via Wikimedia under a CC-BY-SA 3.0).

Dr. Christopher Bungard is an Associate Professor of Classics at Butler University where he has enjoyed teaching an amazingly wide variety of courses for ten years, including a First Year Seminar entitled, "Why Is It Funny?" that looks at comedy across the globe and throughout time. His research largely focuses on Roman comedy, especially the ways that characters like the servus callidus navigate the improvisatory demands of the world. In addition, he has published on the value of performance as a pedagogical tool.

04/13/2022
Blog: Two Years Later: “Classics” after Coronavirus?
In an April 2020 post for Eidolon, I gathered predictions on “classics after coronavirus.” Two years later, it’s...
04/08/2022
Blog: Ancient Worlds, Modern Communities: Increasing Accessibility for the Study of the Ancient World
The Ancient Worlds, Modern Communities initiative (AnWoMoCo), launched by the SCS in 2019 as the Classics...
03/21/2022
Blog: I Love You, I Hate You: A Student’s Perspective on Learning Latin
I have always enjoyed Latin class because it felt like a puzzle, much like math. Find the verb, find the noun that...
03/18/2022
Blog: Power to Punish and Authority to Forgive: Imperial State and Imprisonment in 4th-Century Antioch
Research ideas often develop out of chance encounters or unplanned circumstances. My dissertation project was born...
03/14/2022
Blog: Sampling Epic in Kendrick Lamar’s “Mortal Man”
Because it’s spirits, we ain’t even really rappin’ We just letting our dead homies tell stories for us....
END_OF_DOCUMENT_TOKEN_TO_BE_REPLACED