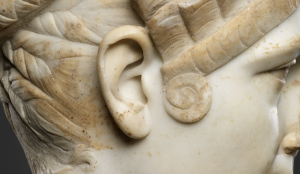 Today we feature a set of podcasts in which the host(s) interview guest classicists to discuss their work, their insights into the ancient world and its relevance for modernity, and their personal and professional experiences.

Explicitly aiming to demystify and to share scholarship on ancient Greece with the non-specialist public, this podcast explores Greek literature, history, philosophy and connects them to modern issues and interests (e.g., the possible causes of the Bronze Age collapse, how Athens dealt with demagogues, what makes Homer’s Odyssey great story-telling).

Discussions of classical teachers’ and scholars’ paths to and through the field touching on the professional (the role of the SCS, Latin pedagogy, teaching at a women’s college) and personal (Dollywood, education in Japan, confronting chauvinism), with particular interest in sharing insights on the intersection of the two.

A podcast from Brown University's Joukowsky Institute for Archaeology and the Ancient World  featuring conversations with archaeologists and ancient historians about what inspires their work and their experiences in the field, including fights with Egyptian police on archaeological digs, ideas for—and challenges in—engaging with the public, and raising children as an archaeologist parent.

Features interviews with classical scholars about how their work helps them better understand the contemporary world and their own lives, combining storytelling and academic research. The topics and voices are eclectic, ranging over night-time bike rides and crowd-sourced translation, modern political activism informed by Thucydides, and how students find meaning in their readings of the past.

A series of wide-ranging conversations with classical scholars about their current research, what drew them to it, and personal and professional issues related to the field and the world at large.

Header Image: Marble portrait of Marciana, sister of the emperor Trajan (130-138 CE, now at the Metropolitan Museum of Art, NYC. Image under a CC0 License).