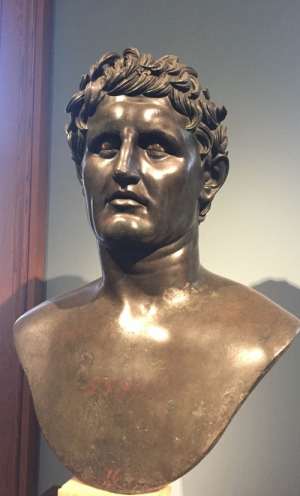 The Seleucid empire has long stood on the fringes of Classical scholarship. Following the conquest of the east by Alexander, the vast, multicultural construction lasted from 312–64 BCE, stretching from modern Turkey south to the Levantine coast and east into Afghanistan. Interdisciplinary by its very nature, Seleucid history straddles the boundaries of academic disciplines, languages, and methodologies, further fragmenting the study of an already fractured power. Recent holistic studies are rare, making the 2014 publication of Paul Kosmin’s comprehensive The Land of the Elephant Kings something of a groundbreaking study. The examination of what Kosmin calls the “territorialization” of the empire—the ideological constructions and experiences that bounded, ordered, and defined the imperial realms—changed the nature of Seleucid studies by intensifying the focus of the recent “spatial turn” in the humanities. Written a few years earlier, Peter Thonemann’s lyrical exploration of the “historical geography” of the Maeander River valley demonstrated the value of a historical approach to place, reminding readers that the relationship between human societies and the physical environment is not one-sided; geography, climate, and the distribution of resources provide constraints and potentialities to the development of human states, particularly in the ancient world. While both works are, in their own ways, comprehensive and immersive studies, each was limited by the top-down nature of its approach, focused on the elite world of literature and ideology. With my own work, I wanted to push this spatial emphasis further, to investigate how an understanding of the nature and use of the Seleucid environment might lead to a clearer conception of the empire and its interactions with local populations.

My current dissertation, which we might call an economic geography of the Seleucid empire, attempts to build on these two approaches by exploring how the economic and social structures one of the greatest Hellenistic empires intersected with the exigent demands of a highly fragmented and varied natural environment. I argue that situating ancient states within the complexities of their physical environment creates a more nuanced understanding of their economic viability and resilience, bringing us closer to comprehending the generally unrecorded experiences of the people who comprised this empire. This emphasis on an environmental approach to the ancient economy, questioning the relationship between place and power, permits an understanding of the nature of the Seleucid state from the ground up, privileging where possible the responses and experiences of local populations.

The study of the entanglement between institutions and the environment allows us to consider the ability of the Seleucid state to function as an adaptive system. It leads us to question how the intersection of environmental constraints, war, political upheaval, and economic crises may result in anything from a catastrophic social shift to a flexible, resilient response—or some combination thereof, and how geographic and environmental factors affect social and political trajectories. Viewed through this lens, the highly adaptive, hegemonic rule of the Seleucids — and indeed that of their Achaemenid predecessors — can be seen less as a liability than as an intelligent response to the unique pressures of their empire.

The difficulty of this approach, as anyone familiar with the study of the Hellenistic world can attest, is the nature of the often late, lacunose, and heavily biased extant literary evidence. Coins, inscriptions, and a bricolage of archaeological records help to fill in the gaps, but a love of nearly impossible puzzles remains a requisite for the study of the Seleucids.

The first phase of my dissertation entailed a detailed data collection project, studying archaeological records, landscape surveys, and satellite imagery. This included working with the recently declassified CORONA database, a collection of thousands of high-resolution satellite images, including landscapes and archaeological features, taken in the 1960s. My research centered on generating a detailed picture of demographics, settlement patterns, and systems of land use throughout the Seleucid empire, with a specific focus on diachronic change. This exploration of local systems is complemented by a careful analysis of patterns of coins and coin hoards centered on lesser-known bronze coinages as evidence for systems of exchange and isolation. The first stage of my research illuminates the relationship of this pattern to networks of connectivity throughout the empire, including the construction and maintenance of roads, waterways, and systems of inter- and intra-state trade.

My study of the local agricultural and economic institutions of the empire serves as a foundation for the next phase of my research, an analysis of both ancient and modern data relating to climate and the environment. Fascinating work on ancient climate by scholars such as Joe Manning and Francis Ludlow has opened up a new perspective on the ancient world, adding another factor to the complexities of historical change. For my dissertation, this necessitates close textual analysis of the Greek literary and epigraphic evidence—particularly the Babylonian Astronomical Diaries. The Diaries, a compendium of cuneiform tablets recording observed celestial, ecological, and economic phenomena with accounts of pertinent historical events, provide invaluable and unmatched data on climate and the fluctuations of prices for staple goods such as barley and dates. These texts will be read in conjunction with newly emerging data from paleo-climatologists, incorporating new interpretations of dendrochronology and ancient ice cores, to develop a complete analysis of the adaptive capability of the Seleucid state and its economic functioning.

I believe that this methodology will permit a consideration of this ancient empire in an entirely new light and provide a fresh perspective on the historical developments of a deeply fractured, intensely militarized state. By articulating the need to control natural and agricultural resources in a highly fragile physical environment, we can consider how climate and the environment may have contributed to the proliferation of conflicts between the Seleucids and their rivals, particularly in the final chaotic century of the empire.

One of the primary goals of my research is placing fine-grained and often difficult-to-access economic and climate data in relation to the larger structure of the development of ancient social institutions. With this in mind, along with my dissertation, I am in the early stages of developing a GIS-based mapping project to reflect the movement of people and the flow of economic resources in the Seleucid empire, focusing (for now) on Mesopotamia, northern Syria, and the Levant. Drawing on a combination of literary, epigraphic, and numismatic resources, my work uses advances in digital mapping technologies to create what has hitherto been out of our reach: a social history of an empire with a very lacunose historical record.

By mapping the movement of populations, coinage, and trade goods onto the physical environment of the empire, we are able to ask — and hopefully answer — more detailed questions regarding the adaptive viability of the state and the lived experiences of its subjects. Was the movement of armies and the creation (or depopulation) of cities impacted by environmental or climatic considerations? Can the flow of coinage between cities and rural spaces demonstrate the organization and intricacies of an ancient economy? How much did the patterns of land usage and settlement differ between empires and between regions? My goal is to create a multi-perspectival map of the empire that will allow us to quite literally see it not as a long-dead political entity, but as a breathing, human construct capable of expansion and contraction, growth and change, movement and stagnation throughout time.

The Seleucid empire, overshadowed by its own dynastic infighting (seventeen contenders for the throne in the dynasty’s last century alone!) and the rise of Rome, has long been viewed as administratively weak, unequal to the task of managing its far-flung territories and disparate peoples. My dissertation research argues instead for a more nuanced, engaged negotiation of power between the Seleucids and local communities, grounded in a hegemonic control of local systems of connection and exchange. Unlike the Ptolemaic dynasty built from Egypt and the strength of the Nile valley, or the Romans with their great empire conquered piece by piece, the Seleucids inherited a deeply fractured terrain encompassing multiple micro-climates, each with differing agricultural, political, and religious needs. In response, their rule was adaptive and flexible, their downfall caused less by an inherent structural weakness than by the competitive ideology of a sprawling dynasty.

The world has perhaps never been more aware of the fragility of human institutions in the face of overwhelming environmental events and implacable climatic and demographic realities. My dissertation research is poised to develop this newfound awareness of human precarity through the lens of the ancient world, permitting a more complex understanding of human adaptability in the face of overwhelming environmental pressure.

Deirdre is a doctoral candidate and Provost’s PhD Fellow in the Department of Classics at the University of Southern California. She holds a BA in Classics from Columbia University. In addition to her dissertation research on the Seleucids, Deirdre works on the history of the Achaemenid empire and on the political position and agency of Hellenistic women, with a particular focus on numismatics and epigraphy.

04/13/2022
Blog: Two Years Later: “Classics” after Coronavirus?
In an April 2020 post for Eidolon, I gathered predictions on “classics after coronavirus.” Two years later, it’s...
04/08/2022
Blog: Ancient Worlds, Modern Communities: Increasing Accessibility for the Study of the Ancient World
The Ancient Worlds, Modern Communities initiative (AnWoMoCo), launched by the SCS in 2019 as the Classics...
03/21/2022
Blog: I Love You, I Hate You: A Student’s Perspective on Learning Latin
I have always enjoyed Latin class because it felt like a puzzle, much like math. Find the verb, find the noun that...
03/18/2022
Blog: Power to Punish and Authority to Forgive: Imperial State and Imprisonment in 4th-Century Antioch
Research ideas often develop out of chance encounters or unplanned circumstances. My dissertation project was born...
03/14/2022
Blog: Sampling Epic in Kendrick Lamar’s “Mortal Man”
Because it’s spirits, we ain’t even really rappin’ We just letting our dead homies tell stories for us....
END_OF_DOCUMENT_TOKEN_TO_BE_REPLACED