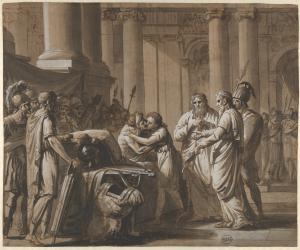 The pitfalls facing intermediate Latin students as they move from a basic knowledge of forms and the simplified Latin of textbooks to actually reading Latin are well-known. It’s not just the artful word order or sophisticated grammar of classical texts. As Kenneth Kitchell emphasized in a well-known article (Kitchell 2000), the geographical and cultural knowledge required can baffle even the student well trained in verb forms, case usage, and syntax. Then there is the well-known tendency of students themselves to ignore low-hanging fruit, to spurn the solicitously extended helping hand in the form of commentaries on their Latin texts, notes specifically designed to help them surmount these difficulties. What can be done?

In 2016 Matthew Katsenes and I developed an online Latin reading environment for a commonly used transposal text, Eutropius’s Breviarium of Roman History. We christened it Eutropi.us and gave it a classroom trial in the Latin III class at Moultonborough Academy, a small public high school in rural New Hampshire. The choice of Eutropius was determined partly by the approachability of his Latin. His schematic account of Roman history would also be helpful background for high school students preparing to read the Advanced Placement Latin syllabus (which covers Caesar and Vergil) or other Republican and golden age authors. In the process, we set out to explore the interaction between text and technology and the consumption of electronic texts.

Eutropius provides enticing opportunities for the commentator. Compared to authors such as Vergil and Ovid, relatively little work had been done with his text. (See Beyer 2009 and 2015 and Masters 2012 for the most current print commentaries, and Bird 1993 for the most recent translation.) We had ample room to experiment in terms of the commentary. As Dale Grote notes in his introduction to Beyer’s translation, Eutropius’s style “is lucid and simple, without being insultingly juvenile” and “challenges emerging Latin students without annihilating their confidence” (Beyer 2009, p. ix). This style employs a restricted vocabulary, straightforward syntax, and familiar grammatical constructions – a perfect recipe for transitioning Latin students.

We curated the selections in order to help contextualize them for the AP Latin Exam. Our excerpts cover the period 113 to 63 BCE, from the Jugurthine War to the Catilinarian Conspiracy. Eutropius’s abbreviated history by no means guarantees a full understanding of this turbulent time period, yet it does provide an opportunity to, at the very least, introduce key players and events, and to remedy some of the cultural and geographical deficits Kitchell identifies.

We first surveyed all digital classical texts and commentaries online to get an idea of what the possibilities and pitfalls might be. We then built in what seemed to us to be key features for a transitional reader:

Born digitally, this commentary seeks to explore the interaction of text and technology and to push the current boundaries. During our classroom trial, we found that, more than anything, the inclusion of technology and these features (e.g., hyperlinks and highlighted sense units) placed a greater sense of agency and choice into the hands of students. It helped to ease that transition into this authentic Latin text and into the turbulent years leading to the fall of the Roman Republic.

Emma Vanderpool is a graduate student in Classics at the University of Massachusetts Amherst. She can be reached at evanderpool@umass.edu.

04/13/2022
Blog: Two Years Later: “Classics” after Coronavirus?
In an April 2020 post for Eidolon, I gathered predictions on “classics after coronavirus.” Two years later, it’s...
04/08/2022
Blog: Ancient Worlds, Modern Communities: Increasing Accessibility for the Study of the Ancient World
The Ancient Worlds, Modern Communities initiative (AnWoMoCo), launched by the SCS in 2019 as the Classics...
03/21/2022
Blog: I Love You, I Hate You: A Student’s Perspective on Learning Latin
I have always enjoyed Latin class because it felt like a puzzle, much like math. Find the verb, find the noun that...
03/18/2022
Blog: Power to Punish and Authority to Forgive: Imperial State and Imprisonment in 4th-Century Antioch
Research ideas often develop out of chance encounters or unplanned circumstances. My dissertation project was born...
03/14/2022
Blog: Sampling Epic in Kendrick Lamar’s “Mortal Man”
Because it’s spirits, we ain’t even really rappin’ We just letting our dead homies tell stories for us....
END_OF_DOCUMENT_TOKEN_TO_BE_REPLACED