Blog: What Does Productivity Even Mean to a Classics Administrator? 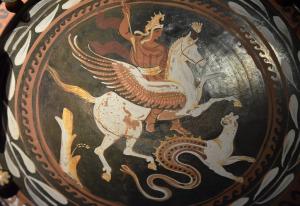 From time to time, T.H.M. Gellar-Goad will be checking in with a member of the discipline to see how they conceptualize or define “productivity” in their own work and in the profession. We’ll ask them the same set of five questions and share their responses, plus perhaps a photo or two from their experiences. These Perspectives on Productivity will present views from a diverse cross-section of our field, people from all sorts of backgrounds, working in all sorts of areas, and at all stages in their Classics-related journeys. Today we hear from Erik Shell, the Communications and Services Coordinator at the Society for Classical Studies.

What does "productivity" mean to you as a member of the discipline?

I expect it means something different to me than the academically engaged portion of the Classics community. I do not research in Classics anymore nor do I intend to start up my old research; I do not teach nor do I have an opportunity to start teaching again. With that in mind I see productivity as the process of working toward two different goals: legacy and yield.

I would consider it productive if I could mold the SCS Placement Service into a stress-free, beneficial resource for Classicists that made them feel valid and heard, a resource that is helpful no matter the state of that market. It would be equally productive to solicit and process Departmental Memberships to keep our relationship to Classics departments strong.

The former is legacy work: it identifies a goal that I find extremely valuable and will outlive my time at the SCS. The latter is yield: a cold, measurable goal that is essential to the functioning of the organization. If I see progress moving on my legacy and yield tasks then I consider my work productive.

What method(s) do you find most helpful in your own productivity?

One of my most consistent tenets of productivity is maintaining Inbox Zero. Nine times out of ten when someone sends me an email (during work hours) I am able to respond almost immediately and then move it to my "Completed" folder. By keeping only things that require my attention my inbox becomes less of an overwhelming catalogue of all my obligations and more of an evolving, winnowing to-do list.

Tied into that is the necessity of remembering what is in my control. If someone emails me about an issue and its solution is not in my control then that email goes immediately to someone more helpful. It then disappears into my "Completed" folder, never to be seen again. It's an immense stress relief to be able to get problems out of my sight both literally and figuratively in that way.

I'm also a big believer in physical to-do lists. They not only keep me on track, but when long-term things come up I will eventually get sick of writing it on a new sheet of paper every week, so I just sit down and do it. I also keep to the philosophy "if it moves the project along then that's productivity." I heavily endorse staring at walls for 15-20 minutes at a time, because sometimes a problem needs a bit of mental blank space. I like to move from my desk to an open table in the afternoon to sit near a window just to mentally change my mode of thinking by physically changing my location. Walks around the park help in that regard as well.

Finally, I consider a stress-free environment and stress-free self as an essential aspect of productivity. For example: I go to the gym every weekday morning just to keep away the stress that comes from being adjacent to the academic job market. Without that outlet it would be quite difficult to keep coming back to repetitive tasks like those that the Placement Service requires, and would be even more difficult to maintain a cool head and open heart to the concerns of job seekers and job posters alike.

What would Present Erik like to tell Five/Ten/Thirty Years Ago Erik about productivity and the profession?

Five-Years-Ago Erik would have listened to nothing that Present Erik has to say about anything. That guy was a stubborn, overworked freight train, and it's a miracle no one hit him in the face once or twice. Unfortunately, this version of Past Erik is the one that was most steeped in academia, and functioned not that different – perhaps – from how other academics view productivity and work-life "balance." I would have told him to seize on to whatever extra time he had and use it to breathe rather than fill that time with other projects. But, as most academics know, in undergrad and graduate school we say "yes," so I can't imagine it would have been a terribly effective argument to Past Erik.

Ten-Years-Ago Erik was graduating high school and still naive enough to listen. He knew nothing of Classics and wouldn't for another three years, but I'd probably tell him three things:

1) Stop taking on every huge challenge just to say you've done them. Get comfortable doing enough.

2) You actually enjoy going home at the end of the day and doing not-work, so spend some time figuring out what actually makes you happy. Then go do those happy things.

3) Productivity has never been compensated less in your lifetime than now, and it will constantly be used as a buzzword to tie your work output to your own self worth. So get really comfortable doing exactly what you should and doing it well, with the very clear-eyed understanding of what will be compensated and what will be exploited.

What is a typical day's worth of project-work like for you?

This is the scandalous sneak-peak into the SCS office that everyone – read: "no one" – has been waiting for!

Most days start with clearing the email and voicemail backlog with a quick identification of what can be done immediately and what has to go onto a priority list. Once the immediate stuff is out of the way I move to medium-term things like processing paperwork, placement stuff, member services, website posting...basically anything that has a set process but still takes some time. Those two things usually get me to lunch, which is used for work-adjacent tasks like writing this article, researching a new project, or reading any industry articles that have come out.

The rest of the day is devoted either to crisis items or long-term projects. Sometimes that looks like phone call meetings and frantic Googling, other times it looks like daydreaming Placement improvements or thinking about data. On Newsletter weeks it looks like a lot of time on the Met's public domain images website.

Each day is peppered with social media monitoring, thinking about the next Newsletter, and fielding questions or robocalls over the phone. Then comes the end of the day, at which point I go home and chuckle a little when a work email comes in. I spent a good two years learning not to answer those emails, and am far better for it.

What do you think most academics or institutions get wrong about productivity?

I think institutions fail to recognize what they actually want when they say they want productivity. It always feels like they want deliverables; if you intend to start a project, write a grant, do some research: it all has to point toward a concrete accomplishment at the end.

To steal a little from Patrick Rothfuss: productivity in institutions is treated like a forge. It looks like full blunt force, extreme heat, and intense concentration without end. I'd argue that productivity – especially long-term productivity, job success, and career-building – is much more like a garden. It requires an open mind, a bit of fresh air, and a deep understanding of the whole picture.

As for academics, I don't think I wade too deep into controversy by saying that we long ago defined productivity as "yes, another." We've done a thing, finished the thing, looked at the thing and said "this was but only a small thing," and then moved on in search of more and larger things. Tenure files demand it, graduate school applications demand it, and the personal qualities academics share – drive, intense curiosity, passion – demand it.

But there's a lot to be said for legacy when it comes to productivity. It is not wrong to leave a CV that looks like a CVS receipt, a trail of books, each more accessible and enlightening than the last. It is currently academically productive to do just that! But it would not be so bad if productivity were also be teaching your course load, increasing departmental outreach events, and being an administrative leader at your university. The academy would suffer not at all if productivity could be measured in long-term Digital Humanities projects in the Art History department, serving as a local high school mentor volunteer, and organizing a Homerathon with the local Shakespeare Players.

I failed in classics graduate school for many reasons, but one of the big ones was the intense, grating effort of a daily productivity. Were there systematic space to work academically under different umbrellas of productivity then perhaps I'd be writing this as an academic rather than an administrator. That said, being an administrator has given me a lot of time to think about legacy, and I hope to get quite a bit more done for the field before Classics has decided it's had enough of me.

Header Image: Red-figure plate of Bellerophon riding Pegasus and spearing a Chimera, Baltimore Painter, 4thC BCE, Palazzo Massimo alle Terme, Rome (Image by Carole Raddato via her Flickr Page). It was chosen for Erik because he is an accomplished D&D Dungeon Master.

Erik Shell is the Communications and Services Coordinator at the Society for Classical Studies. He is currently pursuing his M.A. in Education and Social Policy at NYU, and is frequently podcasting, serving his local community, and running board game nights.