Blog: Being an Independent Scholar in Classics: Challenges and Reflections 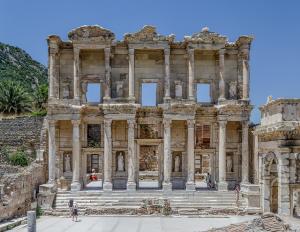 SCS’s Executive Director reflects on the experiences, challenges, and future of independent scholarship in our ongoing series on the subject.

Now to address some challenges:

Some independent scholars are employed full-time, others part-time, while some are freelancers or unemployed.  However, all have challenges with gaining affordable access to the scholarly resources that they need, including both primary sources and secondary scholarship.  I think you all mentioned this at some point in your presentations.  I would like to think that the future of scholarly and educational publishing is one in which resources are available electronically to all on an open-access basis, and in print at affordable prices.  In the same vein, I would like to think that the future of US healthcare is universal coverage.  However, in both realms there are real problems in effecting a transition.  There are too many competing parties and corporate interests.

For eight years, I worked as a funder at the Mellon Foundation, making grants to scholarly publishers and libraries.  We provided seed-funding for some excellent open-access experiments in the humanities that did not rely on author fees, which I find increasingly pernicious both economically and ethically.  We should not be charging authors for publishing their work.  One of the most successful of these experiments is the Open Library of Humanities (OLH), which relies on libraries cooperatively supporting open-access journals that are free to all, rather than spending their budgets on expensive subscriptions for resources that are available only to library patrons.  But how can these experiments scale to result in systemic change?  Different experiments are competing for the same funding sources.  And it is very hard to counteract the corporate behemoths of Google, Amazon, and publishers like Wiley-Blackwell, or even Oxford or Cambridge University Presses, which are legally not-for-profit.  My last few conference talks on scholarly publishing ended in Socratic aporia.

We have some useful open-access resources in Classics but I think for the foreseeable future we will also be dealing with some expensive books, journals, and databases.  CAMWS is already offering their members access to JSTOR journals, while CANE offers the Loeb collection of texts and translations as a member benefit.  I've talked with these societies and have agreed that it makes little sense for SCS to duplicate those same member benefits.

We have issued a survey to members to gauge member interest in having access to certain other resources (Thesaurus Linguae Graecae, Thesaurus Linguae Latinae, APh, the Classics bibliography, and more) as a benefit of SCS membership.  We'll see if our members come to consensus about what they want.  It is very hard to get 3,000 members to agree on anything!  Based on the survey results, we will then approach publishers to see what kind of deals we can get.  We are a large organization and I am not sure how publishers will react and what terms we will be offered, but it is worth a try.  If we could provide access to certain resources as a member benefit, that would very good for independent scholars.

2. Keeping Up With Research in the Field

In addition to reading scholarly literature, going to conferences is a good way to keep up with developments and also to make new connections.  However, conferences are expensive.  We have over the past couple of years increased travel funding for graduate students and non-tenure-track faculty to attend our annual meeting.  It makes sense for us to open up those funds to independent scholars who have precarious employment situations or are unemployed.  However, I also realize that for some independent scholars, time rather than money is the barrier.  In order to accommodate scholars who cannot attend our annual conference, we have started videoing just a few conference sessions and releasing them on YouTube.  We expect to ramp this up over the next few years and eventually livestream as well as record.  However, we have run into an unexpected problem.  Not all scholars are comfortable with appearing on video, though of course everyone wants to see everyone else on video.  The "new media" revolution in Classics will require changing some attitudes.

While reading through the recent blogposts from independent scholars here on the SCS Blog, I enumerated the following: scholarly articles; a bestselling book; a textbook; popular YouTube videos; websites; and ongoing social media dialogues.  I was truly impressed by the scope and quality of the research.  I encourage you to take full advantage of national societies like SCS, AIA, and ACL, and regional classics societies like CAAS, CAMWS, and CANE to amplify the work that you are doing.  It's great for you to give presentations at conferences, but we can also share your work on our websites and social media channels. Feel free to let us know when you have something important to say. As I hope we have shown over the past few months, independent scholars are doing some of the most innovative and public-facing scholarship in the field—and that should be underscored now and in the future.

(Header Image: Façade of the Celsus library, in Ephesus, near Selçuk, west Turkey. Benh Lieu Song (Image via Wikimedia under a CC-BY-SA 3.0 License).

Helen Cullyer received her PhD in Classics at Yale University. From 2000-2002 she was the only full-time classicist at Evergreen State College. She went on to teach classics at the University of Pittsburgh, with a joint appointment in philosophy. From 2008-2016 she was a Program Officer in Scholarly Communications at The Andrew W. Mellon Foundation, funding non-profit publishers, academic libraries, preservation and conservation projects, and digital resources. In summer 2016 she succeeded Adam Blistein as SCS Executive Director.