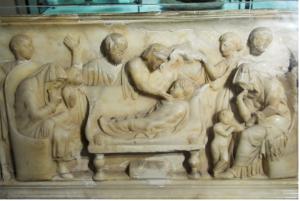 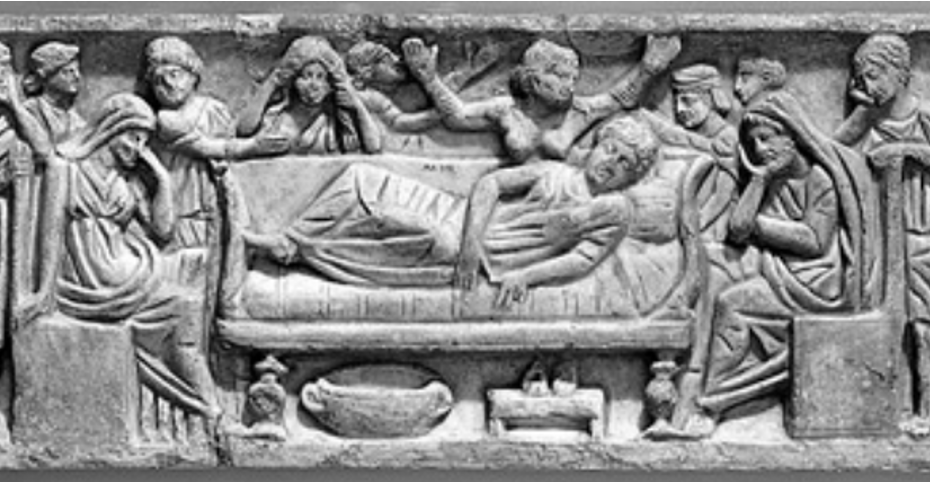 A binary reading of gender roles in the Roman world fails to capture the manifold ways masculinity and femininity were expressed in antiquity. While ancient authors speak about gender roles at funerals in a highly moralizing, idealistic tone, material evidence suggests that these characterizations of gendered behavior at funerals were not true indications of general contemporary sentiments. The act of mourning was not as clearly divided along the gender binary as ancient authors would make it seem. Moreover, expectations of typical gendered behavior were actively subverted at funerals, making the Roman funeral a space in which gender performance was more fluid and can be read through a queer lens (see Moral for queer theory as a tool for understanding non-fixed attitudes and presentations of gender in a specific temporal and spatial context, and Butler for general discussion of gendered performativity).

Seneca the Younger writes, “The same bereavements wound women more deeply than men, barbarians more than the peaceful and civilized, and the uneducated more than the learned” (Seneca, Marc. 7.3). The material evidence complicates this perspective and calls the binary division of gender at funerals into question. Literature paints the image of men unfazed by grief in comparison to women, but gestures of mourning suggest otherwise. We see similarity between men’s and women’s displays of grief in relief sculpture on sarcophagi, such as the mourning gestures of resting one’s chin on their hand, of clasping one’s knee, and of covering one’s face. In these poses, men and women show no distinction from one another, as Anthony Corbeill shows (pp. 77–84). Numerous examples display men and women performing the gesture with the chin resting on the hand. Some reliefs that emphasize the shared action include the sarcophagus scene of Meleager lying in state in the death bed, as well as the sarcophagus depicting the death of a young child sarcophagus (Figures 1 & 2). Both show men and women on either side of the corpses in mirrored poses. This mirroring of gesture shows a practice not determined by gender. The shared gestures underscore how, despite men’s and women’s funeral participation being discussed in binary terms, reality was not always so polarized. 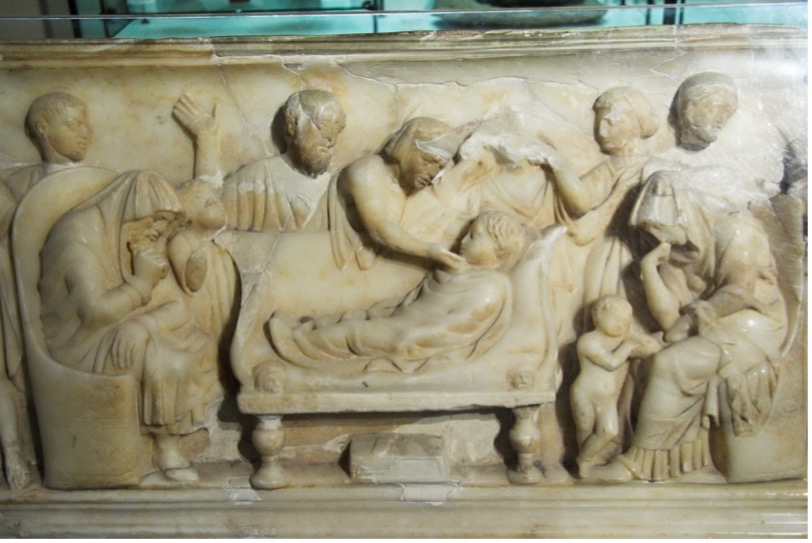 In general, though, Romans regarded the act of mourning as a women’s practice—but, interestingly, the behavior of women at funerals, while gendered, functioned outside typical gender norms. Women bared and beat their breasts, tore at and dirtied their hair, and wailed loudly; they would visit the grave repeatedly over the following days and months. Cicero condemns these gestures of mourning by women as worthy of contempt and says that one should not let grief touch their soul (Cicero, Tusc. 3.62). Despite literary sources’ portraying this behavior in a negative light, these actions were deemed necessary and important in many ways. Rather than uncontrolled and spontaneous, Darja Erker points out that they were in fact codified and that, through the subversion of norms, women fulfilled their duties of caring for the dead and the family as a whole.

Considering the lack of composure exhibited by women during the mourning stage, the funeral was a queering of normative gender practices that may not necessarily have subverted the typical gender norms but certainly altered how gender was performed within a specific temporal and spatial context. Servius notes how mourners inverted typical behaviors: they changed their dress and diet, and they stopped proper cultus of hair and hygiene (Servius, Aen. 11.93). This inversion by female mourners was necessary, as Vassiliki Panoussi argues, because submitting oneself to squalor through intentionally dirtying normally clean hair and clothes meant that the well-dressed, washed, and perfumed corpse seemed, by contrast, to transcend death.

Even more poignant was the inversion of gendered attributes. Women would expose and beat their breasts with their hair disheveled. This contradicts typical expectations of women’s presentation, as they were not supposed to expose their breasts in public nor were they to be seen with their hair down, especially if married (Varro, Ling 7.44). Both of these features — breasts and hair — carried specific connotations with respect to gender, and so performance surrounding these features can be read through a queer lens.

The baring and beating of breasts exemplifies how an action can simultaneously perform gender but also subvert normativity (Figure 1). While it was normally regarded as unacceptable behavior for a woman to beat or expose her breasts in public, in the situation of mourning, Romans considered it a part of a woman’s duties in facilitating the deceased’s transition to the afterlife. The attention given to breasts in funerary settings has thus been analyzed in the context of a connection between death and the life-giving properties of milk. Through the attention given to breasts, particularly in the allusion to breastfeeding, Roman women performed gender. Such a gender performance, however, is specific to the context of funerary mourning. It would be considered outside of the norm of daily practice and therefore exhibits how Roman expectations for gender expression were not fixed. 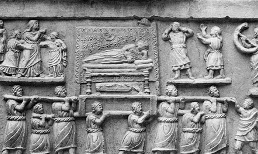 The dishevelment of hair is another women’s mourning practice in the Roman world that queers gender norms. Iconographic examples of women with unbound or dirtied hair are found in both the Republic and the Empire, predominantly from sarcophagi (Figures 1 & 3). Hair defined femininity and therefore is a type of gender performance. There were four contexts in which one could expect to see a woman with loosened hair: worship of a divinity, childbirth, funeral mourning, and sex. Romans associated loose hair with a madness or frenzy that transcends normalcy. In each of these four situations, there is an aspect of transgression or liminality, in which the undoing of the acceptable and expected — i.e., a maintained hairdo — allows for exchange across an otherwise established barrier. Therefore, in the context of the funeral, a woman’s unbound hair not only undermined typical expectations of gender performance but also, through transgression of such expectations, facilitated the funeral’s spiritual liminality. Though subversive of gender presentation in regular daily contexts, in the funeral, the subversiveness gave the action its significance. Like the beating of the breasts, hair at Roman funerals therefore functioned as a performance of gender in a way that solidifies the idea that conceptions of gender were not static and could change based on temporal and spatial context.

Roman funeral practices were undeniably gendered, and many of the duties required to properly put the deceased to rest were clearly divided based on whether someone was a man or a woman. But not all aspects of the funeral procession and mourning process were strictly gendered, and both men and women engaged in similar expressions of grief. Attention to these details reveals how normativity is challenged through gender performance and how Roman conceptions and expressions of gender could be fluid. Though ancient elite male authors spoke about men and women in binary terms, the lived, embodied experiences of men and women at funerals helped shape varying aspects of their identities that included, but was not solely defined by, gender. Further, the queering of gender through baring the breasts and tearing or dirtying hair illustrates how the gender binary is insufficient for understanding gender performance and roles in the Roman world.

By examining settings in which gender is performed, we have an opportunity to see that gender is also being subverted and that assumptions about gender based on moralizing anecdotes can misguide us. The Roman funeral shows us more vividly how the Romans did not limit themselves to fixed gender expectations. This insight can strengthen our own understanding of the nuances of gender in the modern world as we aim to make our society inclusive of all gender identities and expressions.

Jessica Tilley (she/her/hers) is a current Ph.D. student in Classical Archaeology at Florida State University. Her primary research is focused on death and cult during the Roman period in Greece, through which she explores questions of identity and cross-cultural relations.

04/13/2022
Blog: Two Years Later: “Classics” after Coronavirus?
In an April 2020 post for Eidolon, I gathered predictions on “classics after coronavirus.” Two years later, it’s...
04/08/2022
Blog: Ancient Worlds, Modern Communities: Increasing Accessibility for the Study of the Ancient World
The Ancient Worlds, Modern Communities initiative (AnWoMoCo), launched by the SCS in 2019 as the Classics...
03/21/2022
Blog: I Love You, I Hate You: A Student’s Perspective on Learning Latin
I have always enjoyed Latin class because it felt like a puzzle, much like math. Find the verb, find the noun that...
03/18/2022
Blog: Power to Punish and Authority to Forgive: Imperial State and Imprisonment in 4th-Century Antioch
Research ideas often develop out of chance encounters or unplanned circumstances. My dissertation project was born...
03/14/2022
Blog: Sampling Epic in Kendrick Lamar’s “Mortal Man”
Because it’s spirits, we ain’t even really rappin’ We just letting our dead homies tell stories for us....
END_OF_DOCUMENT_TOKEN_TO_BE_REPLACED