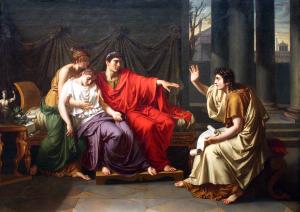 New ideas customarily enter the classroom in a kind of scholarly trickle-down, from the university to daily educational practice. Think of the New Criticism of the 1950s, social history, or backward design. The phenomenon in Latin versification known as the “golden line” represents a striking example of the reverse: an idea generated in the classroom and resisted by the academy for decades, if not centuries, before becoming mainstream in erudite classical scholarship.

The term is first attested in 1612. The earliest citations follow a clear and consistent definition: two adjectives and two corresponding nouns, separated by a verb in balanced symmetry: mollia securae peragebant otia gentes ("carefree people lived lives of easy leisure, Ovid Met. 1.100, a commonly quoted example).[1] Producing such lines was a staple of 17th to 19th century British pedagogy, which heavily emphasized Latin verse composition. Early citations show that teachers expected students to churn out golden lines in rote daily exercises and competitions. And rote is the word: a three-page 1730 dictionary entry on hexameter is mostly devoted to six tables for generating hexameters. The tables date back at least to 1677, and were later used in the famous Eureka Machine that typed out random Latin hexameters (Peter 1677, Baldwin 2012). The golden line was an exercise to get beginners composing Latin hexameters, and almost all educated writers from 1600 to 1890 regarded it as such.

Throughout this period, university dons do not refer to the golden line in print. But when mandatory verse composition began to wane in the late 19th century, authors of school texts started to notice and praise them. T.E. Page, in one of his widely-used commentaries, says "some of the finest effects in Virgil owe much to the same device" (Page 1895, 58). Winbolt, who wrote extensively about the golden line in his verse composition manual, points out that the device is "used sparingly by Virgil, and only in solemn or exalted passages … In Lucan, Statius, and Claudian golden lines are cheap as pewter" (Winbolt 1900, 88).

By the 1960s, enthusiasm for the device would reach beyond secondary schools and school commentaries. Senior scholars in Britain and America began to take notice of the construction in their textual criticism and scholarly commentaries. L.P. Wilkinson’s 1963 book Golden Latin Artistry treated the golden line at length and brought it to the attention of scholars across the world. That book and W. F. Jackson Knight’s 1944 Roman Vergil were points of reference for scholars in Europe. Henceforth, European scholars, too, began to adopt this exclusively British preoccupation. Today, scholars worldwide analyze the central poets of the classical and medieval canon by applying the metric of the golden line.[2]

What accounts for the change in the golden line’s fortunes during the late 19th and early 20th centuries? The primary reason seems to be that school commentaries began at this point, right at the time when Latin verse composition declined. Perhaps more important, this period saw the awakening of an unprecedented need to defend Latin and the Classics, for which the golden line was enlisted. A golden line, with its easily seen interlaced pattern, is impossible in a non-inflected modern language. Cooper's 1952 Introduction to the Latin Hexameter explicitly connects the golden line with the special status of Latin: The golden line "tak[es] advantage of Latin’s peculiar powers...By its means a dramatic effect is obtained which is denied in a positional language such as English" (Cooper 1952, 44). What had been a dreary schoolboy exercise came to symbolize what was special about Latin.

The golden line’s newly won scholarly imprimatur is more than a rare triumph of schoolteachers in the halls of academia. Its salience in classrooms is at least partly due to its strong appeal among students.[3] Admiring it can help students justify to themselves and others the hours spent learning the myriad Latin case endings. Student preferences and classroom practice shape literary canons, because certain works either better illustrate theories in the classroom, or have proven entertainment value (Brown 2010). Student interests influence how teachers present literary criticism in the classroom (Gallagher 1997). The fortunes of the golden line hint at the little-noticed ways in which student interests and classroom exercises can shape scholarly practice as well.

Peter, John. 1677. Artificial Versifying or, the School-Boy's Recreation: A New Way to Make Latin Verses. Whereby Any One of Ordinary Capacity, That Only Knows the A.b.c. and Can Count 9 (Though He Understands Not One Word of Latin, or What a Verse Means) May Be Plainly Taught, (and in As Little a Time As This Is Reading Over,) How to Make Hundreds of Hexameter Verses, Which Shall Be True Latin, True Verse, and Good Sense. Never Before Publish'd. London: Printed for John Sims at the Kings Head, in Cornhil.

[3] See for example, When I Find a Golden Line by Daniel Pauperrimus (pseudonym) tagged by another iucundisaureis. See also Brooke Andrade’s description of discovering golden lines in 10th grade.

Ken Mayer is Director of Distance Learning at Capitol Technology University in Washington, DC. He has published on the history of the golden line, Plutarch, and representations of ethnicity in Greek historiography. Now he has a lot of questions about how classroom practices shape scholarship, and welcomes your answers, suggestions, and references at ken.i.mayer@gmail.com.

12/06/2021
Blog: Immersivity and (Other) “Fantasies of Antiquity”
The last decade or so has seen growing interest in “immersive” representations of antiquity: representations that...
12/03/2021
Blog: Ancient Worlds, Modern Communities: Interpreting the Ancient World through Music, Art, and Photography
The Ancient Worlds, Modern Communities initiative (AnWoMoCo), launched by the SCS in 2019 as the Classics...
11/29/2021
Blog: Whose Aeneid? Imperialism, Fascism, and the Politics of Reception
A few years ago, I read an essay by Elena Giusti in the now sadly defunct Eidolon. In this piece, Giusti considers...
11/22/2021
Blog: Dissertation Spotlight: Language and Difference in Herodotus
Classical Greeks often articulated a worldview that divided the world between Greeks and all other ethnic groups....
11/19/2021
Blog: Dissertation spotlight: The Price of Money: Aristophanes’ (Modern) Lessons from the Past
A conspicuous theme in Aristophanic comedy is the civic motivation of Athenian citizens, which is presented as...
END_OF_DOCUMENT_TOKEN_TO_BE_REPLACED