Blog: Finding Comedy in the Performance of Ancient Drama 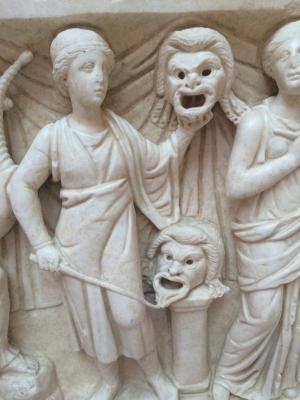 This blog entry is the first in a new series, Letters from CAMP, that will appear throughout the year and explore the various practicalities and benefits of the performance of ancient drama in its many forms.

Two years ago at the annual meeting of the Society for Classical Studies, a Senior Scholar of great distinction stood in the middle of a room crowded with many of the finest minds in classical scholarship, looked around, and said loudly, “Look at all these f**king a**holes.”  To the best of my knowledge, this was a first. Most scholars have been tempted to say the same when faced with a crowd of SCS conference goers, but most are a bit more circumspect in their language.

In this instance, context is everything. The lady in question was performing the part of Poseidon, reworked in a modern aesthetic, at a staged reading of Aristophanes’ Birds organized by the Committee on Ancient and Modern Performance (CAMP) in conjunction with Stanford Classics in Theater. Rather than gasping in shock, the audience laughed and applauded.  In the context of comedy, it’s possible to say what everyone might be thinking, with no harm done and no bones broken.

The success of the joke came from it context and its speaker, but also from its audience. The speaker was one of their own, a distinguished member of the community and a personal acquaintance to most the crowd, so the insult became a shared joke between the speaker and each member of the audience individually. In the hands of a stranger, the line would have been a straightforward instance of insult comedy. However, the familiarity of the audience with the actor turned it into something else: a moment of connection and (dare I say it) catharsis. Each audience member could relate to her, so she seemed to speak for each person, rather than at him or her, and therefore her insult was somehow at the general, faceless whole, never the self. The recovery of that connection between the audience and the actor is one of the great benefits of performing plays as a form of research.

If there is one thing that is abundantly clear in Aristophanic comedies, it is that he and the intended audience share a close connection. Ancient comedic texts not only break the fourth wall to engage directly with the audience on current events, but also presume that the audience is familiar with the author’s past productions. Aristophanes’ running lampoon of Athens’ top official, Cleon, loses its referent if the audience is not comprised of engaged Athenian citizens. Likewise, the parabasis of Wasps scolds the audience on its reception of the Clouds the previous year without explicitly stating that the name of the play (1015-1050), so the Wasps audience was presumed to have been substantially the same as the audience at City Dionysia comedy contest in 423 BCE.

The crowd’s reaction to the illusion-breaking insult described above captures, in part the original Aristophanic audience’s experience at the premier of Birds. It is therefore an excellent example of the benefit of performance as research and demonstrates the ongoing work of CAMP. CAMP was created to better understand the meaning created through the performance of ancient drama and to promote the use of performance both as a pedagogical tool and as a research methodology. At each meeting of the SCS, we practice what we preach and hold a staged reading of an ancient or classically inspired play.

We are fortunate that the SCS's annual meeting (in San Diego in 2019) is such an excellent venue for the performance of ancient drama. One of the hardest aspects of the genre to recover is experience of close connection between author and audience, the dynamic of familiarity in the creation of meaning. The relationship can and should be mimicked in the classroom, although it’s hard to recreate the dynamic of meaning built up over long periods of time when the classroom population changes from year to year. The SCS annual meeting, with its community of regular attendees and frequent CAMP audience members, comes close to recreating that relationship between an author or actor and a known, regular audience. As a result, the CAMP shows can bring out the shades of humor that are otherwise hard to appreciate, as demonstrated by the Senior Scholar in Birds.

Krishni Burns is Lecturer of Latin at the University of Illinois at Chicago in Chicago, Illinois, US. Her main areas of study are ancient religion and the lives of women in Republican Rome, as well as the expression of classical myth in children’s popular culture. Her current book project is Bringing Their Mother Home: Roman Multiculturalism and the Mother of the Gods. She participates in the European Research Council project Our Mythical Childhood and chairs the Committee on Ancient and Modern Performance (CAMP).

04/13/2022
Blog: Two Years Later: “Classics” after Coronavirus?
In an April 2020 post for Eidolon, I gathered predictions on “classics after coronavirus.” Two years later, it’s...
04/08/2022
Blog: Ancient Worlds, Modern Communities: Increasing Accessibility for the Study of the Ancient World
The Ancient Worlds, Modern Communities initiative (AnWoMoCo), launched by the SCS in 2019 as the Classics...
03/21/2022
Blog: I Love You, I Hate You: A Student’s Perspective on Learning Latin
I have always enjoyed Latin class because it felt like a puzzle, much like math. Find the verb, find the noun that...
03/18/2022
Blog: Power to Punish and Authority to Forgive: Imperial State and Imprisonment in 4th-Century Antioch
Research ideas often develop out of chance encounters or unplanned circumstances. My dissertation project was born...
03/14/2022
Blog: Sampling Epic in Kendrick Lamar’s “Mortal Man”
Because it’s spirits, we ain’t even really rappin’ We just letting our dead homies tell stories for us....
END_OF_DOCUMENT_TOKEN_TO_BE_REPLACED