Blog: Classics Everywhere: Meeting The Community Where They Are 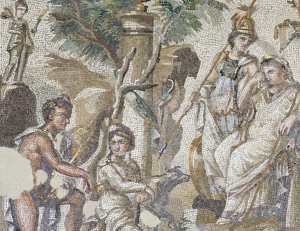 The new Classics Everywhere initiative, recently launched by the SCS, supports projects that seek to introduce and engage communities all over the US with the worlds of Greek and Roman antiquity in new and meaningful ways. During the first round of applications, the SCS funded 13 projects, ranging from performances and a cinema series to educational programs and inter-institutional collaborations. In this blog post, we aim to highlight three programs in which Classicists are sharing the joy of studying Greece and Rome with their communities..

For the field of Classics to remain relevant and vibrant, it is incumbent on classicists to leave the comfort of their offices and classrooms to engage with their communities. In these interactions, scholars can use their expertise in Classical Studies to help new communities discover themselves in the ancient material, and be inspired to learn more about the ancient Mediterranean. Achieving this goal requires not just a willingness to be flexible about to how to present antiquity to different audiences, but also a capacity for listening and responding to what the community finds exciting, engaging, and moving. The three programs described in the post, which have all received funding from the SCS Classics Everywhere grant, do just that: they extend the joy of Classics to new communities by meeting them where they are, whether it’s a homeless shelter, an elementary school, a bookstore, or a brewery.

Daniel Harris-McCoy and Chelsea Gardner, from the Department of Languages and Literatures of Europe and the Americas at the University of Hawai’i at Manoa, have been introducing Classical mythology and culture to the homeless youth at the Institute for Human Services (IHS) shelter in Honolulu. Hawaii has the highest per capita rate of homelessness in the United States, and IHS is one of the major organizations addressing this crisis and providing addiction and psychological support to those it serves. In addition to support services for adults, IHS provides educational support to children from kindergarten through middle school with an after-school program. This winter, Dan and Chelsea were awarded a Classics Everywhere grant to build a library for the homeless shelter and fill it with Classics-themed books (Greek myth stories, books about Socrates and Roman buildings, maps, and Greek and Roman literature adapted for kids).

Dan has been volunteering at the IHS after-school enrichment program for the past three years and with the creation of the new library, he has committed to volunteer for 30 minutes a week to read and present from these books to the children of the shelter. "The IHS aftercare program,” Dan said, “does a huge amount of good on a small budget. The Classics Everywhere initiative has thus contributed to the resources available to children at IHS in important ways." Most students at IHS “are from Micronesian communities (Marshall Islands, Chuuk, Pohnpei) and use English as a second language. For these reasons and more (e.g. lack of exposure in Hawaiian public schools), most students would not otherwise experience classical culture.” Though they lack previous exposure to the ancient Mediterranean world, these students have embraced the new material they’ve been introduced to, and have found that it resonates with their own cultures: “they are especially excited by Greco-Roman myths, which complement the Hawaiian and Pacific stories that are part of their heritage."

Five thousand miles away, Kendra Eshleman and her colleagues at Boston College’s Department of Classics Studies have established a new Aequora site at Nativity Prep School in Jamaica Plain, MA. The only tuition-free school for boys in Boston, Nativity Prep serves primarily students of color from low-income families in the city. The school has about 50 boys in total, and usually 8-9 boys are in class for each session. Once per week, a group of undergraduate and graduate students travels from BC to Nativity Prep to teach interested students Latin language and Roman culture using an engaging activity- and games-based approach. The program’s goal is to introduce students who traditionally have not had access to classes about the ancient Mediterranean to these areas of knowledge, enriching their own educational experience while simultaneously bringing a more diverse audience into the field. Kendra and her team also aim to improve the students’ literacy and vocabulary by exploring the Latin roots of English and Spanish, as well as to increase their confidence through individualized support and mentoring. The program also gives Boston College students a chance to gain pedagogical experience and to take greater ownership of their learning through hands-on work with students.

The Paideia Institute aided Kendra and her students with a remote training, in which they talked about lesson plans and classroom management and programming more general, and got tips for best practices to manage middle-school boys. The Classics Everywhere grant has funded transportation for the Boston College students on Nativity Prep each week, printing the textbooks, and small stipend for the site coordinators. This year one senior undergraduate and one Masters student are the coordinators, while some students from the Intermediate Latin 2 class are volunteering to teach the kids, with a rotating group of students travelling to the school each week. The coordinators introduce something that leads into an activity; the volunteers help with the activity (e.g. mapping things, finding derivatives for Latin words, picking their Latin names). The Boston College faculty are very engaged too: the faculty work with the coordinators, and a faculty member is in the room while the volunteers are teaching. Faculty members rely on their own classroom experience to help with logistics, props, order of events, and transitioning from one activity to another.

Kendra’s own words give a glimpse into the lively learning community they have created that has inspired both the Nativity Prep and Boston College students: “The boys are curious about how Latin relates to English (what does ego have to do with ego?) and quick to connect Roman culture to their lives (a Roman insula with shops on the ground floor is like living above a bodega!). The program also gives BC's student volunteers, everything from Intermediate Latin students to advanced undergrads and MA students, a chance to engage with Latin in a fun, active way outside the classroom and to develop their teaching skills. They've learned a repertoire of fun games and some valuable lessons: how to keep wiggly 10-year-olds interested and on task, how to handle an in-class meltdown, and how to design a flexible lesson plan that can be adapted on the fly.”

In addition to these ongoing projects, the Classics Everywhere initiative helped to fund two one-time-only events held in Lincoln, Nebraska during this year’s CAMWS Annual Meeting. On Wednesday, April 3, Amy Pistone, currently Visiting Assistant Professor of Classics at the University of Notre Dame, presented a talk at Indigo Bridge Books on ancient and modern sports, the internet, and the modern world titled “From Gladiators to the Gridiron: Sports through the Ages”. Amy was inspired to speak on ancient sports, not only because of its broad appeal, but also because UNL was having its spring football game the same weekend as the conference. (This also allowed Amy to draw on her knowledge as an NCAA football referee!) In tracing the history of sports, in particular how access and amateurism in the development of the modern Olympics and the NCAA, she discussed the role of Jim Thorpe and the Native athletes of the Carlisle School in the development of American football. The fact that Native athletes were included in this narrative had a significant impact on one member of the audience, who, as Amy recounts, “was so excited that I'd mentioned Native people in a classics talk, because she's Native and has never seen herself in a Classics talk.” Following the talk, there were “other meaningful conversations with students about access to classics and the demographics of classics/classicists”, which Amy hopes will push the attendees to think more about Classics and social justice.

On Saturday, April 6, Amy organized a Classics-themed trivia night at Green Flash Brewery, which attracted 45-50 people, including CAMWS attendees as well as members of the broader Lincoln community. Classics Everywhere funds were used to compensate the trivia quizmasters and provide prizes for the winners, including gift-cards to Indigo Bridge Books. Amy’s goals for the event were to show people a different side of what classics is, and to encourage classicists to venture out into Lincoln for “some good, general classics-y fun!” The questions were wide-ranging and reception-oriented, so they highlighted how classics is something that's all over our world (movies, shoe brands, superheroes, military history). Beyond the fun and competition, the trivia event helped to solidify a new partnership between the UNL Classical Studies department and Indigo Bridge Books, which is supporting this year’s Homerathon and planning a joint book club for the fall.

When we are responsive to a new community’s interests, it forces us to open our mind to new approaches to material we may feel we know very well, and to adjust our methods of presentation to appeal to a broader audience. These projects have succeeded because they each discovered a common ground – whether it be storytelling, language, sport, or friendly competition – that gave community members a way to connect their own experiences with the world of the Greeks and Romans. As all these projects show, cultivating relationships between university departments and local community organizations can enrich, enliven, and expand the impact of the field of Classics as a whole.

Proposals for final round of Classics Everywhere funding are due May 15 and can be submitted here.

Header Image: A 2nd century CE mosaic from Antioch now at the Louvre (Paris) depicts the "Judgement of Paris" (Image by Marie-Lan Nguyen via Wikimedia).

Mallory Monaco Caterine is a Professor of Practice in the Department of Classical Studies at Tulane University, where she teaches Latin and Greek language, Greek civilization, and ancient leadership. She runs an Aequora site in New Orleans as part of a Latin service-learning curriculum. She is also a founding member of Kallion, an organization devoted to the improvement of leaders and leadership through humanistic inquiry. Currently, she is the chair of the SCS Committee on Classics in the Community.

07/10/2020
Blog: What Parts of Classics Would We Choose To Preserve for the Future?
In light of the present administration’s brazen disregard for facts and the public good, you’ve got to admire past...
07/03/2020
Blog: What Are the Best Classics Books for Children?
Finishing my third trimester in the midst of a pandemic was not what I had planned for the last months of...
06/26/2020
Blog: Can Studying Classics Encourage Empathy and Equity?
The new Classics Everywhere initiative, launched by the SCS in 2019, supports projects that seek to engage...
06/19/2020
Blog: Creating a Coalition to Empower Classicists of Color
In 2018, a group of scholars founded Mountaintop Coalition, an SCS-affiliated group with a shared interest in...
06/12/2020
Blog: Women in Classics: Froma Zeitlin
Froma I. Zeitlin retired from Princeton University in 2010, where she was the Charles Ewing Professor of Greek...
END_OF_DOCUMENT_TOKEN_TO_BE_REPLACED

END_OF_DOCUMENT_TOKEN_TO_BE_REPLACED
Calls for Papers
CFP: Myths and Societies: A Cross-Cultural and Intertemporal Approach