Blog: Classics Everywhere: Activating your Imagination through the Arts 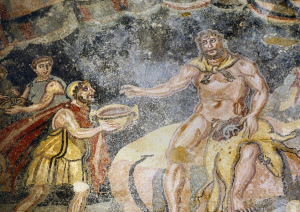 The new Classics Everywhere initiative, launched by the SCS in 2019, supports projects that seek to engage communities all over the US and Canada with the worlds of Greek and Roman antiquity in new and meaningful ways. As part of this initiative the SCS has been funding a variety of projects ranging from children’s programs to teaching Latin in a prison. In this post we focus on four programs that use the performing arts for the exploration and appreciation of Greek and Latin literature.

Observing artists who work imaginatively and freely with the ancient material encourages students to think and act in non-linear ways. Cultivating one’s imagination is particularly important for Classicists, who are constantly seeking for new interpretations and new approaches to the ancient past. The projects below funded by the SCS’ Classics Everywhere Initiative invite their audiences to examine Greek and Roman literature through dance, theater, and staged readings; to explore known stories through different lenses; to stimulate their imagination; and to satisfy the human desire for creativity, entertainment, and learning.

According to Stephen Scully, Professor and Chair of Classical Studies at Boston University, engaging with the arts helps students activate their imaginations.  After attending a talk on Martha Graham’s representation of Medea last fall, Scully invited the Martha Graham Dance Company (MGDC) itself to come discuss Graham’s approach to Greek tragedy and her interest in reimagining strong Greek female heroines like Medea, Clytemnestra, Ariadne, and Jocasta. Janet Eilber, the MGDC artistic director, and two MGDC dancers will come to Boston University on October 22 to showcase the intersection between Graham and Classics. The event is free for the public and tickets can be reserved here. Eilber will speak about Graham’s vision of Greek heroines, and show video excerpts illustrating her points, while two dancers will perform Errand into the Maze, Graham’s masterpiece about the vulnerability and strengths of women, the confrontation of one’s fears and the representation on stage of female victory. The dance re-envisions the female hero Ariadne – instead of Theseus – facing and defeating the monstrous Minotaur.

For Scully, bringing to campus Graham’s company creates “an opportunity for the university to think about the relationship between scholarship and art and between language and dance as different media of expression.” The Graham company’s presentation will also help integrate Classics with many other areas on campus, such as the College of Fine Arts, the Center for the Humanities, the Arts Initiative, Kilachand Honors College, and the Physical Education, Recreation, and Dance Program, all of which have signed on as co-sponsors for the event. While opening new doors for non-Classicists into the world of Greek theater, this event invites Classicists to expand the ways they interpret and situate the plays in broader cultural contexts.

The Shackouls Honors College (SHC) at Mississippi State University also seeks to form connections between their humanities and arts programs, while making both more accessible to the greater region of northeastern Mississippi. Every year SHC brings together various local communities by sponsoring “Classical Week,” a week of academic and social events dedicated to celebrating classical antiquity. “Classical Week 2019” will take place September 23-27, 2019. This year’s theme is “Unexpected Heroes”. As part of the festivities, Donna Clevinger, a performing artist, Senior Faculty Fellow at SHC and Professor of Communication/Theatre at Mississippi State University, will be staging a performance of Plautus’ The Braggart Soldier (Miles Gloriosus) on September 24 and 25. Funding from the SCS’ Classics Everywhere Initiative is being spent to hire Classics scholar Dr. Philip Freeman as a dramaturg for the performance, and to acquire an outdoor sound system; technology essential for an open-air performance. The play is expected to attract audience members not only from the university, but also from secondary schools, and local organizations.

For Clevinger, participating in a classical play motivates students to think about the relationship between the humanities and the arts, and to imagine themselves in a different time and place. This year’s theme “Unexpected Heroes” encourages students to think particularly about who the “heroes” are in the ancient play, and about their relationship to today’s heroes. “The Braggart Soldier is about trickery and mistaken identity and offers an opportunity for students to think about their own identities now that they are starting college,” notes Clevinger. In addition, Clevinger is particularly happy with the timing of this project. With auditions taking place during the first week of the semester, the play provides a chance for new students to get to know each other and other participants through meaningful collaborative work that is also great fun. By the time of the play the cast is inseparable.

Students currently rehearsing for the show were eager to share their perspective too. Joseph Rutherford ‘22, a sophomore playing Palaestrio noted “The Braggart Soldier stands out to me because of how it easily can be produced in the modern world. While the play dates back over 2000 years, the innuendos and scenario can be easily understood even in today’s time.” Kathryn Moore ‘22, a sophomore in the role of   Philocomasium, the young Athenian woman abducted by the braggart soldier, said:  

If there has been a single, most important takeaway from my time working on Mississippi State University’s Honors College’s production of Plautus’s The Braggart Soldier, it is without a doubt that I have not stopped laughing. The clever wordplay, the outlandish (yet somehow oddly relatable) circus of characters, and the timelessness of the story itself, translates brilliantly from an untouchable ancient Roman comedy to a fantastic modern satire exploring a Grecian culture that is not far from our own in the twenty-first century. 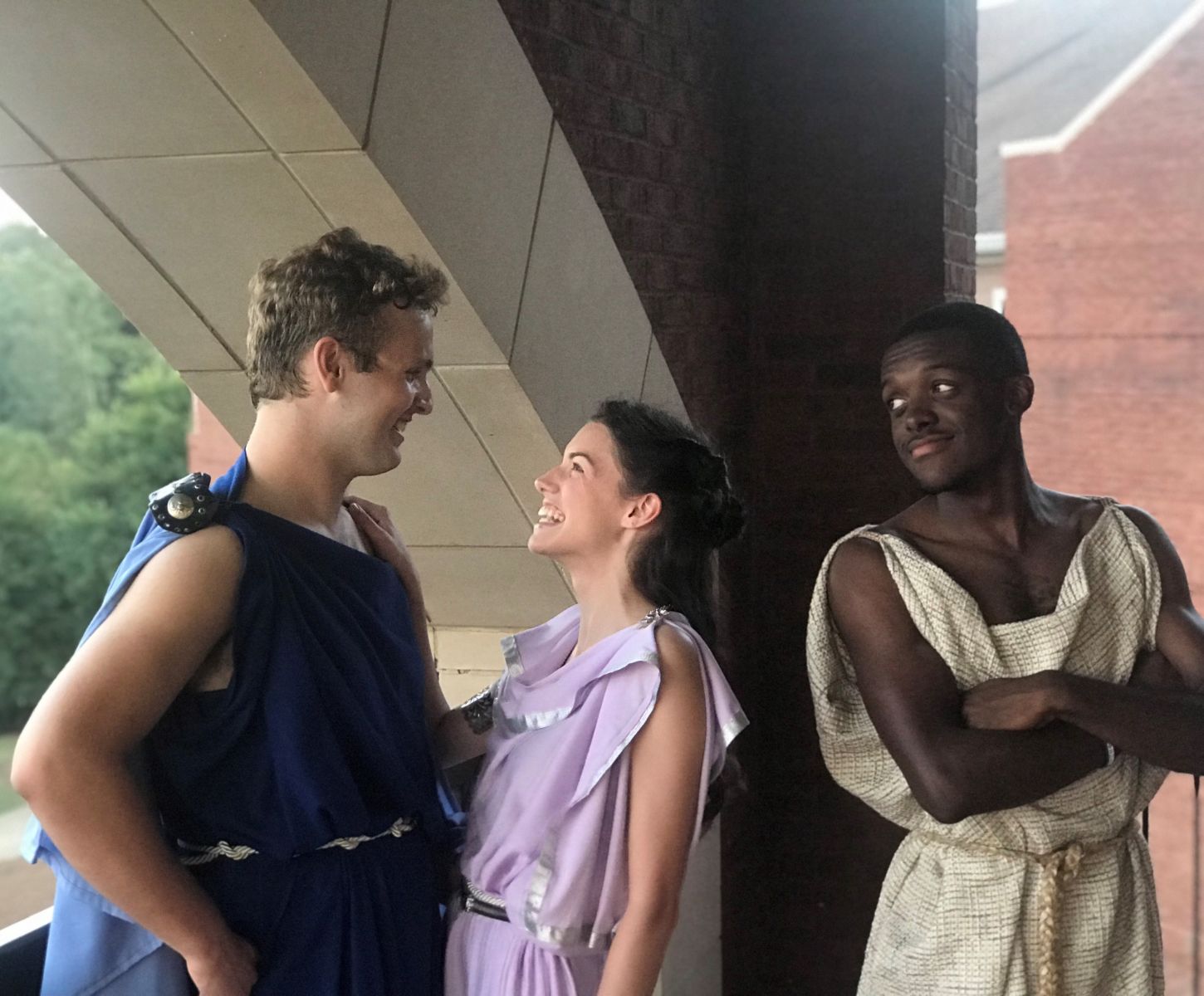 [Photo 1: The scheming Palaestrio (Joseph Rutherford on the right) looking on to the secret lovers Pleusicles (Nolan Richard Jones) and Philocomasium (Kathryn Moore) during rehearsals of Plautus’ The Braggart Soldier. Photo by Donna Clevinger.]

Another strong believer in the arts as a vehicle for important conversations and community bonding is Lauren Rogers, the Dean of Students at Salem Academy in North Carolina. On June 2, 2019, Rogers organized a staged reading of Sophocles’ Antigone that aimed to enrich the local community by drawing on the talents of a dynamic and ethnically and racially diverse group. Produced in partnership with the NC Black Repertory Theatre Company and the Wake Forest Innovation Quarter, the staged reading took place in Bailey Park in Winston-Salem, NC. It was directed by Carlo Feliciani Ojeda, a drama student at the University of North Carolina’s School of the Arts. Rogers notes that “approximately 40 audience members braved the Sunday afternoon heat to take in this electrifying performance that broke the fourth wall and shared Antigone’s timeless message.” 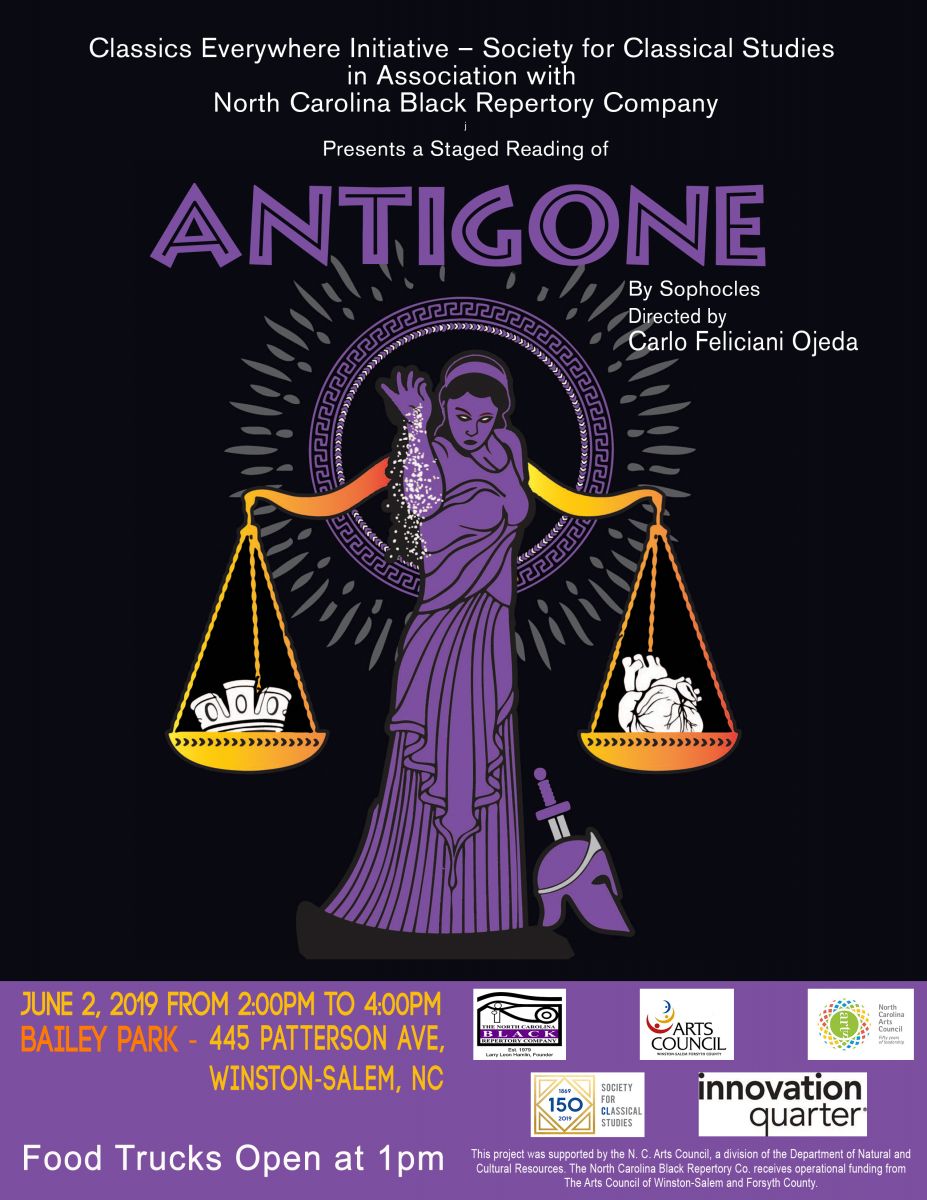 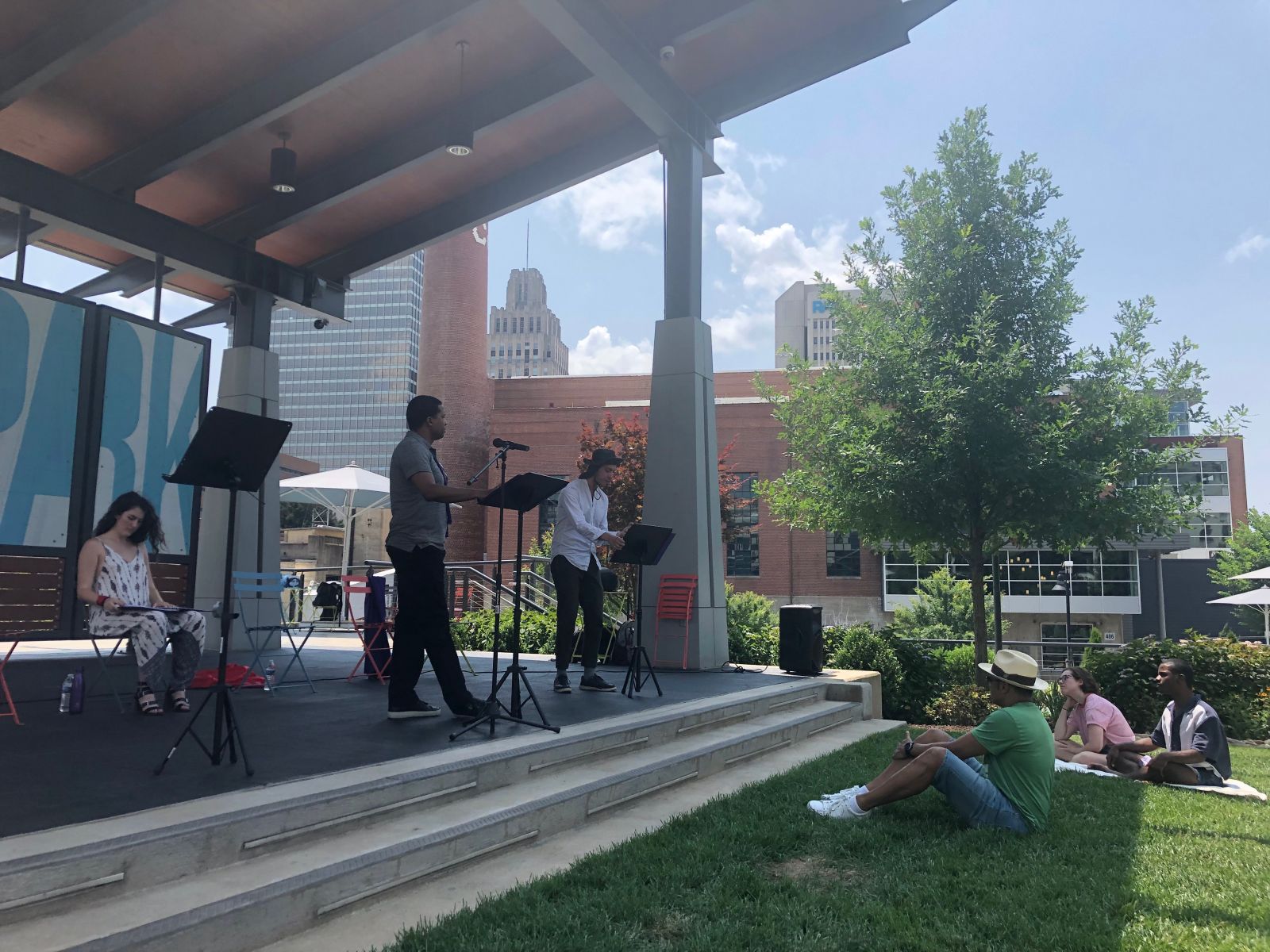 [Photo 3: Performers and audience members during the staged reading of Antigone on June 2 in Bailey Park, Winston-Salem, North Carolina. Photo by Lauren Rogers.]

Rogers, who has twice received a Classics Everywhere award, finds the organization of such events immensely satisfying. However, she also admits that there are challenges. The amount of time it takes to coordinate everyone involved is daunting, and making sure that the audience will be large enough can be stressful. Nonetheless, Rogers deems the reward well worth it. As she notes in the present case:

This project brought live, classical theatre to Winston-Salem’s most centrally located public park. It introduced the general public to the timeless themes of Greek tragedy, and it brought theater to a performance space in town that had not previously hosted theater productions.

The staged reading also encouraged the audience to use their imagination and, in Rogers’ words, “made the concerns and political struggles of Thebes vibrant and real in the heart of Winston-Salem…. The creativity of this performance served as a vivid reminder to the power (and magic) that live performance brings to ordinary spaces in our community.”

Imagination is also essential for audience members of Homerathons, day-long readings of the entire Iliad or Odyssey which aim to approximate the experience of ancient Greeks listening to professional bards. Homerathon audience members are invited not only to listen to the Homeric poem, but also to become viewers of it: that is, to see the action narrated with their minds’ eyes. Homerathon readings encourage listeners to engage their imaginations in evoking the landscapes, people, actions, and even feelings that they hear described.

Mike Lippman, Associate Professor of Classics and Religious Studies at the University of Nebraska-Lincoln (UNL), organized his 4th Homerathon last April, the second time that he has done so at UNL. With the help of his colleague Matthew Loar, the Classics Club, and the Eta Sigma Phi organization of UNL, Lippman planned an all-day reading of the Odyssey which started at 8am and ended around 2am the following day. There were approximately 50 readers and 500 participants from the campus community and the extended community of Lincoln. College and high school students, professors, the university chancellor, two vice chancellors, the mayor of Lincoln, local politicians, state poets, and veterans were among those who read passages. A special guest appearance was made by Jonathan Shay, the clinical psychiatrist and author of Achilles in Vietnam and Odysseus in America. 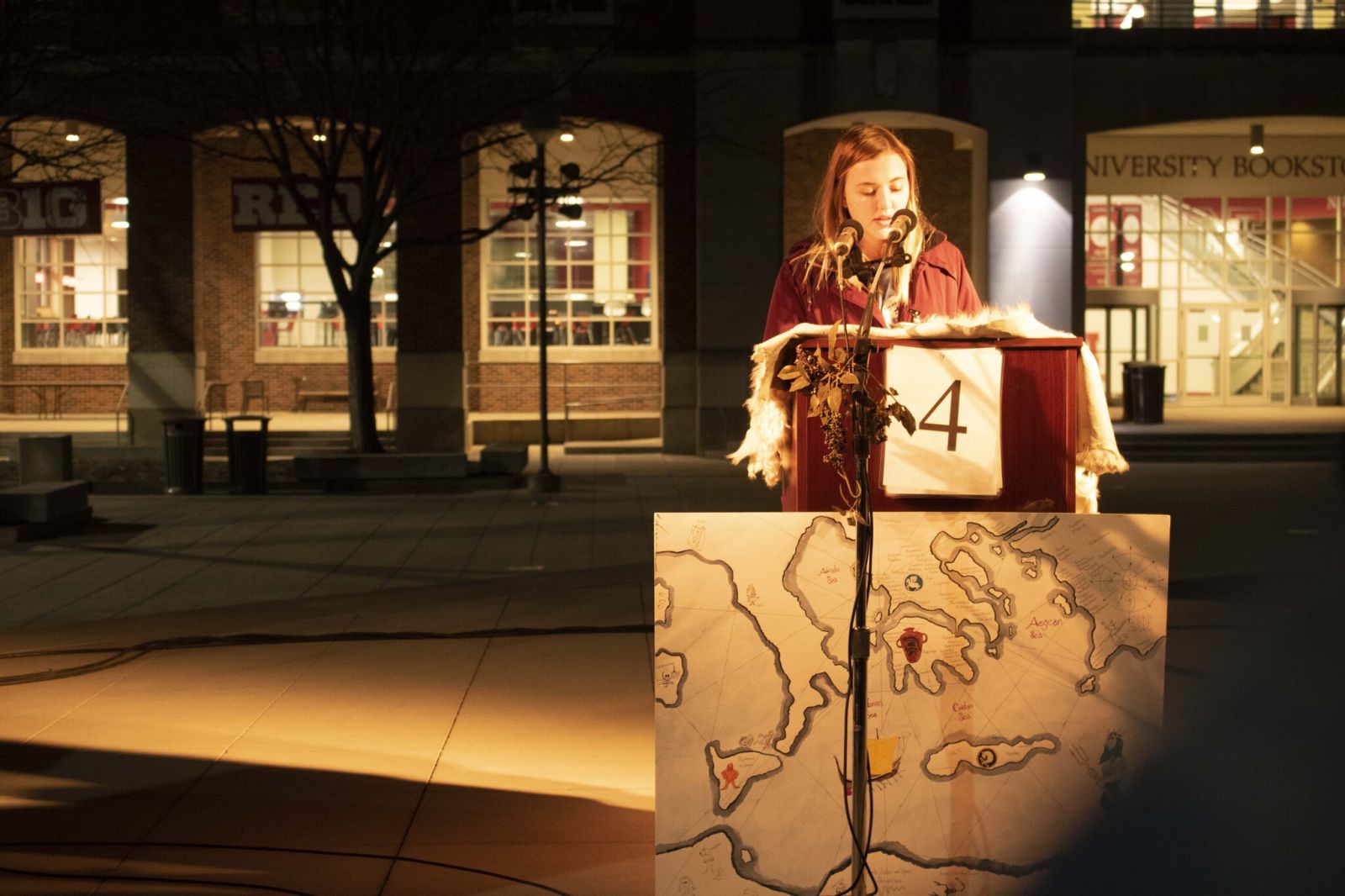 [Photo 4: Brooke Mott ‘20 reading during the Homerathon on April 18 at UNL. Photo by Evan Crawley.]

The UNL Homerathon is largely student run and gives students real world experience in event planning, business networking, marketing, and management. In a report about the Homerathon the students themselves wrote: “One of the main goals of Homerathon is to partner with community members and local business owners. By networking with them, community members are able to gain a better understanding and appreciation of Classics, and students are able to develop the necessary communication and writing skills applicable to the business world.” Highlights from the Nebraska Homerathon can be seen in this student-made video. 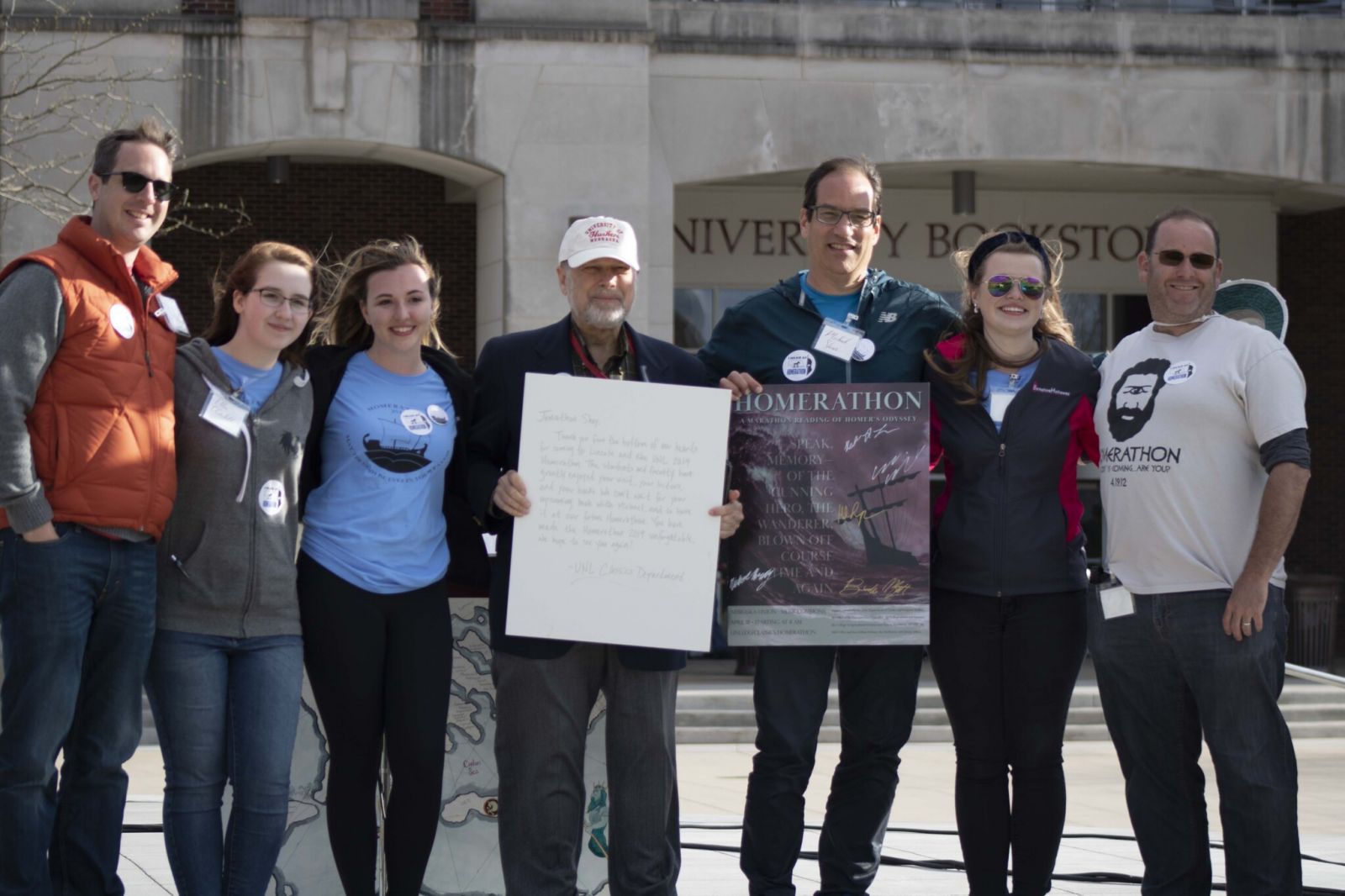 Greek and Roman stories have long provided inspiration for artists working in a variety of media. Whether ancient or modern, artists challenge their audiences to reconsider what they already know, to pay attention to their physical senses, and to respond to the stories and the issues raised through both thought and physical reactions.

We welcome applications for the next round of Classics Everywhere Awards due on October 15.

12/06/2021
Blog: Immersivity and (Other) “Fantasies of Antiquity”
The last decade or so has seen growing interest in “immersive” representations of antiquity: representations that...
12/03/2021
Blog: Ancient Worlds, Modern Communities: Interpreting the Ancient World through Music, Art, and Photography
The Ancient Worlds, Modern Communities initiative (AnWoMoCo), launched by the SCS in 2019 as the Classics...
11/29/2021
Blog: Whose Aeneid? Imperialism, Fascism, and the Politics of Reception
A few years ago, I read an essay by Elena Giusti in the now sadly defunct Eidolon. In this piece, Giusti considers...
11/22/2021
Blog: Dissertation Spotlight: Language and Difference in Herodotus
Classical Greeks often articulated a worldview that divided the world between Greeks and all other ethnic groups....
11/19/2021
Blog: Dissertation spotlight: The Price of Money: Aristophanes’ (Modern) Lessons from the Past
A conspicuous theme in Aristophanic comedy is the civic motivation of Athenian citizens, which is presented as...
END_OF_DOCUMENT_TOKEN_TO_BE_REPLACED