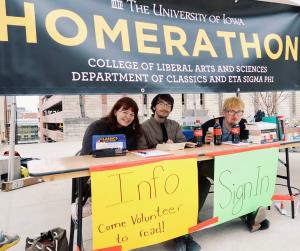 Marcia Lindgren, Rosemary Moore, Deb Trusty, and the president of our Eta Sigma Phi chapter, Myles Young, began planning in January, just about when the Midwest winter turned difficult. We all wanted a larger group of readers, and a wider audience, for a reading of the lliad and as much of the Odyssey as we could fit in 24 hours. Much of the organization was similar to what we had done in previous years, but since we wanted to reach a much wider audience, as well as read for 24 hours without stopping, the logistics were more complicated.

We started planning in January, figuring out the rules as we proceeded. None of us had organized anything quite so…big as a campus-wide event. As to how we divided tasks: Myles Young has a real gift for making connections. He established contacts with many media outlets, as well as the UNESCO organizing committee. Thanks to him, we had both a dedicated round-the-clock staff as well as local media coverage. Marcia and Deb organized the logistics – sourcing equipment like a tent, sound amplification, arrangements with university planning as well as a local food truck (the former being far more reliable than the latter), and Rosemary undertook contacting a list of “VIPs” – prominent people in the campus and local communities. These included Bruce Harreld, President of the University of Iowa, classics scholar Peter Green, who recently translated both the Iliad> and the Odyssey and of course is well-known for his many contributions to so many areas of Greco-Roman scholarship, and Helena Dettmer, Associate Dean in the College of Liberal Arts and Sciences as well as former chair of the Classics Department. We also reached out to the campus and community at large. Charity Nebbe, a host at Iowa Public Radio, as well as Jim Throgmorton, mayor of Iowa City, joined us as readers. Faculty at the Writers’ Workshop, such as poet James Galvin, read and listened. We canvassed the department for any type of connection outside the humanities on campus, such as the business school, as well as the community – local political representatives and teachers. We even asked Beto O’Rourke to read (as the presidential campaign is already happening in Iowa), not for partisan reasons, but because he named one of his children Ulysses out of his love of the Odyssey. Unfortunately, he was not available.

The reading took place outdoors at Kautz Plaza, a major crossroads for the campus community. Thousands of students pass it daily as they go to and from their classes or residence halls. Thanks to Lindsay Vella, Classics Department administrator, we had a banner posted for advertisement, and many passersby stopped to listen and volunteer. Our site was opposite the Tippie College of Business, and Rosemary heard from a colleague she invited, a professor at Tippie, that many were curious about the event. She of course let them know she had been specially invited to read and encouraged her colleagues to join us.

We live-streamed the opening ceremony and provided regular updates on the reading by Twitter and Facebook. Helena Dettmer welcomed the 50 or so people who attended the opening ceremony, and Peter Green read the opening lines of the Iliad from his own translation. President Bruce Harreld read as well and spoke about his own encounter with Homer. His remarks set a theme for the event that we had hoped to achieve but couldn’t force – that many outside Classics engage with and are shaped by Homer, and that their memories of this literature continue to influence their lives. In President Harreld’s case, being asked to speak caused him to remember his mother reading the Iliad to him when he was a child, a memory that made him tearful. President Harreld’s own background is in engineering and business.

We really didn’t know what to expect at night – participation, safety, how feasible the entire enterprise would be at all. By 9 pm on the first day, the event was run by Eta Sigma Phi members, all undergraduates who had volunteered. The weather was pleasant enough for late March in Iowa, though the day had been overcast and very windy. Students had prepared with blankets, a space heater, and a pup tent, as well as ample refreshments.

We chose to switch translations book by book, using many of the more well-known recent translations, including Carolyn Alexander’s Iliad and Emily Wilson’s Odyssey. We kept track of translation, book, and line on a whiteboard by the podium. The wind prevented us from projecting images of Greek vase paintings ordered to correlate with the book being read, though of course future versions of the event could include a visual component.

Surprisingly, it was during the night that the most interaction between passersby and Homerathon readers took place. Many who walked past asked to read and stayed to listen, through almost 2 am. Several students from Monmouth College in Monmouth, Illinois, drove through the night to join us, arriving at 1 am and leaving at 3 am in order to get to morning classes. By sunrise, we had reached book 18. As the day proceeded, the audience grew and shrunk as readers brought friends and passersby stopped to listen. By 10:30 am, we had finished the Iliad and dove into the Odyssey, eventually ending at book 18. At 4 pm the closing ceremony began with remarks by Art Spisak, director of the University honors program and professor of Classics, who read from the Odyssey and then turned over the podium to our final readers, classics majors and honors students Liana Salgado and Hannah Huzzey.

Every reader we asked enjoyed taking part, even the young man who ended up with the Catalogue of Ships. Many reflected on their deeper engagement with the passage they read, and even the classicists who participated were struck by just how great these works are, even though we should be as familiar with them as anyone.

This event is something we hope to continue on the same scale or even more broadly. As classicists, we know well that Homer and epic poetry in general was never meant to be read silently – it is meant for all to share and continue to engage with throughout their lives. The Iliad and Odyssey remind us of our humanity, and teach us how to be, with others, with ourselves, with the world we inhabit, as much as it is about the past. Our mission is to share this literature and encourage others to find a place for it in their own experience.

Rosemary Moore is a lecturer in History and Classics at the University of Iowa. Her major research interests focus on the social dynamics between various ranks of the Roman military, and the military and Roman society as a whole, as well as textile production. She is particularly interested in issues such as the development of military discipline, and the influence of civilian modes of conduct on military authority and behavior. She has presented her research at numerous conferences in North America and regularly publishes on topics such as Alexander the Great. Prof. Moore received her Ph.D. from the University of Michigan in 2002 and came to the University of Iowa in 2003.