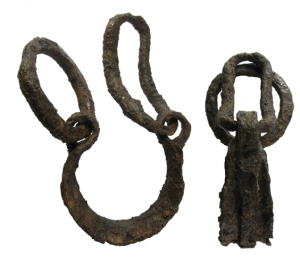 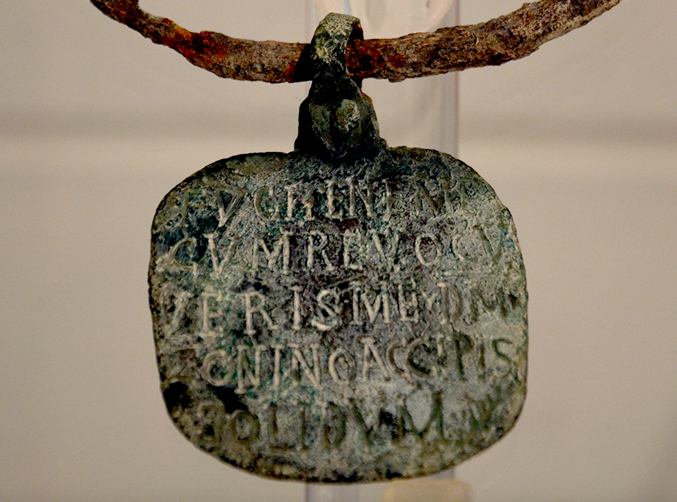 Figure 1: Slave collar from the 4th-6thC CE now at the Baths of Diocletian (Image by Carole Raddato under a CC-BY-2.0).

In developing the course for undergraduates, I knew I wanted to frame the discussion of ancient slavery around its continuing impact and legacy. On the first day of class, I asked students to discuss the following question: why do we study ancient Greece and Rome? They came up with a thorough list of expected responses: architecture, philosophy, democracy, just to name a few. After writing their answers on the board, I told them I had one critique: our list focused too heavily on the apparent positives we’ve inherited from the classical world. If we abandon some of the American romance with the classical Mediterranean, we can ask: are there negatives?

This query began a discussion of slavery in the classical world and its impact on slavery in America. In his notes on the Constitutional Convention of 1787, James Madison paraphrases Charles Pinckney’s pro-slavery argument: “If slavery be wrong, it is justified by the example of all the world.” Madison says that Pinckney then cited “Greece, Rome, and other ancient States.”[1]

The class also examined how John C. Calhoun’s 1837 claim before the US Senate that slavery improved the condition of the enslaved[2] mirrored the Aristotelian argument that slavery was beneficial for those he deemed slaves by nature (Politics 1254b). We ended the term by reading Rita Dove’s The Darker Face of the Earth (1994), a tragedy that appropriate Sophocles’ Oedipus Tyrannus to tell an antebellum story of a slave named Augustus Newcastle and his return to the plantation in South Carolina where he was born. Thus, our term-long discussion was framed by the use of Greek and Roman slavery in pro-slavery arguments in the ante-bellum United States history.

The next academic year, I accepted a position at the College of Charleston in South Carolina, where I taught the same course. On my first day of teaching, I had the same initial discussion of Greek and Roman slavery, and its impacts on American history. Here, however, the context felt completely different; students were surrounded by markers of America’s own dependence on the buying and selling of enslaved persons as chattel. In Kalamazoo, names like Pinckney and Calhoun seemed familiar only from my students’ memories of American history courses, but my students in Charleston merely needed to walk outside to see ties to the ancient world and to remember these figures and their legacies.

The campus and the very building in which I was teaching the course, Randolph Hall, puts the legacy of the classical world on display. The front courtyard of the building (Cistern Yard) has a front gate (Porters Lodge) with the Greek maxim γνῶθι σαυτόν (‘know thyself’) above its central entrance: 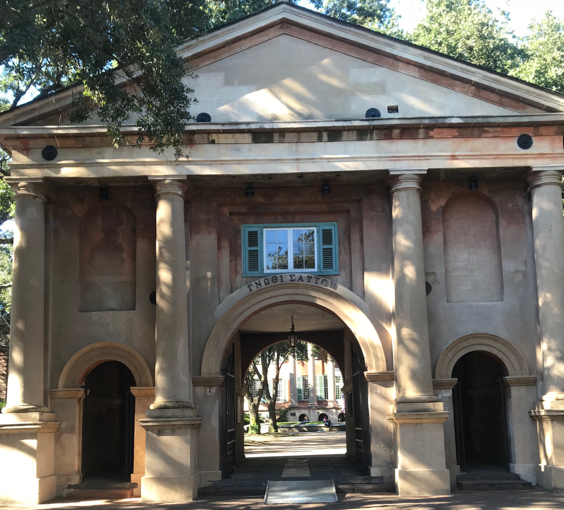 Figure 2: Porters Lodge, College of Charleston. The lodge was constructed in 1850.

This phrase is said to have been inscribed in antiquity above the front entrance to the Temple of Apollo in Delphi.[3] After walking through Porters Lodge, visitors to the College are then greeted by the neoclassical columns of the campus’ logo building, Randolph Hall. On the rear side of the building, one can exit the central part of campus through the Latin Gate, with the words of Vergil, haec olim meminisse iuvabit (“someday it will be pleasing to remember these things,” Aeneid 1.203), written across the top.

The neo-classical campus and its epigraphic landscape of Greek and Latin inscriptions is nested within the center of a city still deeply embedded with the complex history of slavery and racism in America. The gate is on Calhoun Street, named after the pro-slavery South Carolinian discussed above, and a monument to the man towers on high one block east of campus. One block further stands Mother Emanuel AME Church, where 9 people were killed in 2015 by a white supremacist. Pinckney Street lies four blocks from campus, and the Pinckney family’s plantation, probably not wholly unlike Rita Dove’s fictional plantation, lies 19 miles east of campus. 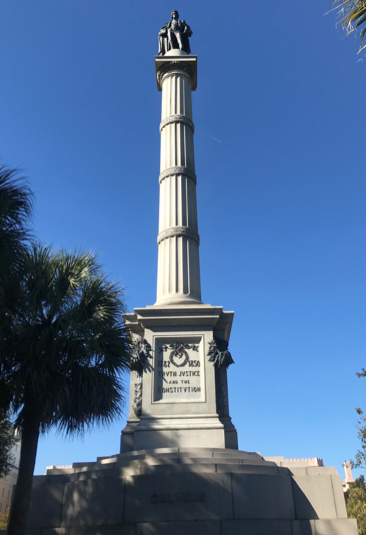 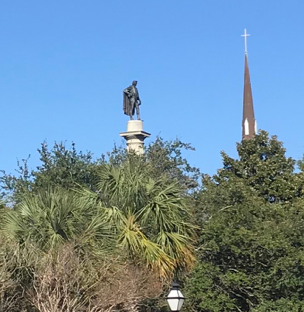 Figure 5: View of Calhoun Monument from College of Charleston campus.

Teaching in Charleston also provided an avenue for understanding slavery that is difficult to find in the study of its classical roots: the perspective of the enslaved. There are only a handful of Greek or Latin literary texts by persons who had once been slaves: the fables attributed to the quasi-legendary Greek fabulist Aesop, the comedies of the Roman freedman Terence, and the philosophic treatises of the freedman and Stoic philosopher Epictetus—though there is much more epigraphic evidence from enslaved persons.

The literary testaments reflect only tangentially, however, on slavery.[4] The majority of the literary evidence about classical slavery looks at the idea of slavery from the perspective of slave-masters. Many, like Euripides’ Trojan Women, certainly take a sympathetic view towards the enslaved, but, as Donna Zuckerberg points out, “[n]o matter how much [Euripides] sympathized with the victims, in his political and social context he more closely resembled their victimizers.” 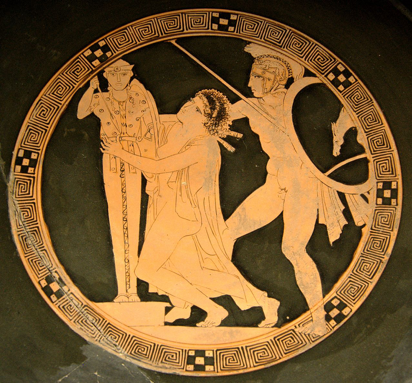 Figure 6: Women as plunder of war: Ajax the Lesser taking Cassandra, tondo of a red-figure kylix by the Kodros Painter, c. 440-430 BC, Louvre (Image via Wikimedia and is in the Public Domain).

Engaging with—rather than ignoring—the history of the city has been profitable to my teaching. Charleston supplements our readings with physical remnants of the past. My students and I took a field trip to the Old Slave Mart Museum in the historic district of Charleston, where we saw artifacts of enslavement: the chains that held slaves waiting to be sold, the tools with which they were violently beaten, advertisements to announce an auction, and sales records that listed the names, ages, and physical descriptions of those human beings who were sold as commodities, and the prices for which they were sold. Any idea that slavery was a benign institution in antiquity or today dissipates rather quickly.

Discussing slavery within a city so deeply informed by the legacy and reality of servitude has made me realize the importance of the work we do as classicists, ancient historians, and archaeologists. The reality of slavery has been one of unimaginable suffering and inhumanity for thousands of years. Its roots in classical civilization and culture serve as a reminder that we don’t study the classics solely to celebrate the achievements of antiquity, but also to understand the ways in which the culture and institutions of the ancient Mediterranean have been used and abused as exemplars to abhorrently long-lasting effect.

Note that there will be a Lightning Talks session on pedagogy organized by Mary Jaeger (University of Oregon) at the SCS’ annual meeting in San Diego on Friday, January 4 (1:45 p.m. - 4:45 p.m.) Please see the preliminary program here.

[4] In contrast, there are several American works of literature that have given a voice to those who endured slavery and, in turn, more perspective to us—perhaps most notably the autobiographical memoirs of Frederick Douglass (1845, 1855, 1881), Solomon Northup (1853), and Harriet Ann Jacobs (1861).

Header Image: Roman slave shackle found at Headbourne Worthy, Hampshire (Image via Wikimedia and taken by PortableAntiquities under a CC-BY-2.0).

04/13/2022
Blog: Two Years Later: “Classics” after Coronavirus?
In an April 2020 post for Eidolon, I gathered predictions on “classics after coronavirus.” Two years later, it’s...
04/08/2022
Blog: Ancient Worlds, Modern Communities: Increasing Accessibility for the Study of the Ancient World
The Ancient Worlds, Modern Communities initiative (AnWoMoCo), launched by the SCS in 2019 as the Classics...
03/21/2022
Blog: I Love You, I Hate You: A Student’s Perspective on Learning Latin
I have always enjoyed Latin class because it felt like a puzzle, much like math. Find the verb, find the noun that...
03/18/2022
Blog: Power to Punish and Authority to Forgive: Imperial State and Imprisonment in 4th-Century Antioch
Research ideas often develop out of chance encounters or unplanned circumstances. My dissertation project was born...
03/14/2022
Blog: Sampling Epic in Kendrick Lamar’s “Mortal Man”
Because it’s spirits, we ain’t even really rappin’ We just letting our dead homies tell stories for us....
END_OF_DOCUMENT_TOKEN_TO_BE_REPLACED