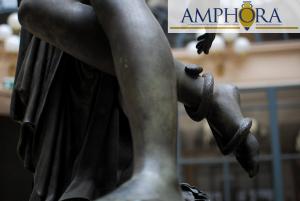 This article was originally published in Amphora (12.1). It has been edited slightly to adhere to current SCS blog conventions.

The story is familiar. Musician marries the love of his life; on their wedding day, she dies. He grieves until he wills his way into the Underworld and is allowed to retrieve her on one condition, which he violates. Thus, even the theme is the same: the fallibility of the human condition and the inability of art to triumph over the persistence of suffering and the finality of death. Nor is Eurydice a strident feminist with a point to prove, after centuries of silent existence as nothing more than a catalyst for the erotic narrative that is the myth of Orpheus and Eurydice. For contemporary American playwright Sarah Ruhl, Eurydice is foremost a daughter who learns the hard way that all relationships are constructed of words that cannot always withstand the insistent tensions and demands of parents and spouses. Since language is so deficient, Ruhl deploys light, space, distance, and depth to hone the banal into razor-sharp instruments capable of exposing emotional vulnerabilities most audience members would rather not admit existed. For Ruhl, in the theater space must yield to imagination, not, as in film, the other way around.

Sarah Ruhl (1974–), born in Wilmette, Illinois, was a Pulitzer Prize finalist in 2005 and a MacArthur Foundation fellow in 2006. She earned her MFA at Brown University, where she drafted Eurydice in 2001; it premiered in Madison in 2003 and made its New York premiere off-Broadway at Second Stage Theatre in 2007. In 2009, I saw it performed at the Hippodrome State Theater in Gainesville, Florida, under the direction of Lauren Caldwell.
Judgments on the play are not unanimous. Gentle critics notice logical inconsistencies. Demanding critics complain of “mannered writing that’s less mature, veering frequently into poetic preciousness” (Rooney 2007). Harsh critics accuse Ruhl of murdering the myth: “Until Sarah Ruhl’s Eurydice, I never saw a writer make such active efforts to snuff the life out of [a Greek myth]” (Feingold 2007). Still, the play is acclaimed as “full of both woe and wonder,” walking “a tightrope between the mythic and the mundane” (Lahr 2007). It is hailed as “the most moving exploration of the theme of loss that the American theater has produced since the events of September 11, 2001,” by a critic who confessed he “fought off tears for half the play, not always successfully” (Isherwood 2006). My favorable attitude toward the play is betrayed by the hold it has had on my imagination since 2009. I too fought off tears, not always successfully, although I also gagged on lines intolerably cloying. To my mind, the success of this play lies in the way it attracts and repels audiences by professing its own pretensions.
The cast of Eurydice is small: Eurydice, Orpheus, A Nasty Interesting Man / The Lord of the Underworld (played by the same actor), and a Chorus of Stones named Big Stone, Little Stone, and Loud Stone. In addition to these characters who derive from the ancient version of the myth (Orpheus, Eurydice, Hades, and a chorus as would appear in a Greek tragedy), Ruhl has added the character of Eurydice’s Father, who appears in all three acts and is therefore central to her concerns in the play.

The elevator in which it is raining is the play’s signature feat of engineering (Figure 1). Rain inside an elevator is both impossible and improbable and therefore poetic. It is easy to imagine an elevator that transports people from the upper to the lower world, from life to death; likewise rain connects sky to earth. Yet the combination of these two simple ideas results in a complex and even visceral space. Audiences are at once struck by the sound of falling water. The elevator is dark inside, but back-lit so eurydice, by sarah ruhl -- orpheus in the raining elevatoras to bring the rain into full relief. The elevator is only big enough for one person, but because the rest of the theater is dry, it seems to contain a whole world of its own. Only the horizontal opening and closing of the doors signals the vertical ascent and descent. Thus the raining elevator manipulates light, space, and depth.
The play opens with Orpheus and Eurydice at the beach. They gaze out at the immense sea so that we, the audience, are obviously distanced from their world. Scene two breaks the horizontal line of sight between Orpheus and Eurydice on the beach and the audience at sea; instead, the audience must look up to see the Father standing on a catwalk (figure 2). He reads a letter explaining that although he has been dipped in the River of Forgetfulness, he is one of the few dead who still remembers how to read and write. If the Lord of the Underworld finds out, he will be dipped again. He drops the letter, filled with platitudes for his daughter on her wedding day, into an imaginary mail slot. Communication is thus vertical and unidirectional.
Eurydice marries Orpheus but then wanders off from her own wedding reception and meets a “Nasty Interesting Man” purporting to have in his possession a letter from her Father. The Nasty Interesting Man lures her to his penthouse and attempts to seduce her. She pinches the letter from his pocket but then falls to her death.

Victoria Pagán is Professor of Classics and affiliate of the Center for Gender, Sexualities, and Women’s Studies Research at the University of Florida. Her research focuses on the Roman historians,Tacitus in particular. Known also for her work on gardens, she is co-editor of Disciples of Flora: Gardens in History and Culture (Cambridge Scholars Press, 2015). She can be reached at vepagan@ufl.edu.