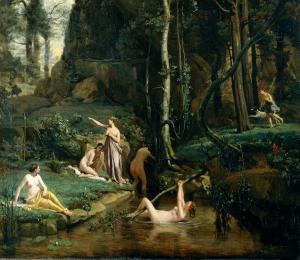 Ovid’s Metamorphoses has fared better than other Latin epic poems in modern Chinese reception. It has been rendered into Chinese twice: first, selected parts (about three-fifths) were translated in the 1950s by the renowned scholar of English literature, Yang Zhouhan (1915–1989), who supplemented the rest and published the complete translation in 1984; second, a Taiwanese man of letters, Lü Jianzhong, published a version of the entire epic in 2008. Each translation has its own merits: Yang’s version reads fluently and his style is natural, with tinges of archaic feeling, aimed at easy and pleasant reading. Lü’s version is more colorful and playful, more elegant in its choice of words and expressions. Both translators used F.J. Miller’s Loeb edition as the basic text, consulting the facing English translation and whatever other English versions each could get hold of. More importantly, both (like Miller) opted for prose, though neither explains this decision in the translator’s preface. Yang seems to take it for granted that prose was the only option for the Chinese version. Lü is concerned with the average reader in our age, who is not accustomed to reading long poems; yet he emphasizes his willingness to sacrifice easy readability on occasion to imitate the rhetorical effects of the original.

How could a new Chinese translation improve on these extremely readable versions, and at the same time help us learn something new about Ovid’s work? The obvious solution is to attempt a poetic version. But, here arises immediately the difficult problem of poetic form. Both Yang and Lü apparently believe that, since there is no equivalent to the Latin epic meter in the Chinese poetic tradition, it is better to opt for prose, which at least is capable of re-telling the story faithfully. This point is made clear in the preface of Yang’s prose translation of the Aeneid and reflects a widely held belief among modern Chinese translators of western classical poetry. The prime example in this case is again, Homer. A debate over whether and how to render the Homeric epics into Chinese poetry has been going on for a century, yet there is no sign of reaching any agreement. Overall, those who argue that “the story” of the epics is the most essential part to be “translated” have carried the day. One sign of this “story-teller” view is the fact that the titles of all the epics mentioned above have been rendered into Chinese ending with the character ji—the Iliad becomes in Chinese “Ilion-ji”, the Odyssey “Odysseus-ji”, the Aeneid “Aeneas-ji” and the Metamorphoses “transformation-ji”. This character ji designates an age-old genre in traditional Chinese historiography, a narrative in prose of the biographical events of a person, or the historical events of a dynasty, and has also served as a model for the Chinese novel.

However, no serious reader of classical poetry (whether western or Chinese) can hold onto the belief that the poetic form is simply there to convey the “story” and therefore subordinate to it. A serious reader is aware that the form of a poetic work is inextricably linked to its poetic qualities and contributes to its distinct poetic style. When this serious reader imposes on himself the task of a translator, he must constantly ask himself: what are the foremost poetic qualities a poet endeavors to embody in his work, such as Ovid in the Metamorphoses? To answer this question in the simplest way, three outstanding features have been agreed upon by commentators: rapidity, grandeur, and wit. All three features turn on Ovid’s extremely artful handling of the poetic form in terms of verses and words. It has long been seen that the rhythm of the hexameters in the Metamorphoses are more dactylic than Virgil’s. Other characteristics of these verses (e.g., elisions and caesurae) also come into contrast with Ovid’s chief rival poet, pointing to the conclusion that Ovid deliberately favors speed and lightness over Virgil’s weight and monumental gravity. Moreover, Ovid’s epic grandeur and wit are built on a verbal art that is almost matchless. In his poetic diction there is a profusion of Greek proper names and their adjectival derivatives, obscure mythological patronymics and periphrases, all combined to produce an epic grandeur of a very distinct type. In terms of his verbal wit, he uses etymological wordplay, pun, play between literal and figurative meanings of words and expressions, unusual word order, oxymoron, near-repetition (the list can go on endlessly to include almost all the rhetorical figures) all of which evoke an ironic effect that makes the reader ponder almost every line.

These poetic qualities are well appreciated by the serious reader, and pose a titillating challenge to the present translator. For me the attempt to “re-create” these qualities in a proper poetic form is a rare opportunity to experiment with the limits and niceties of the expressiveness of the Chinese language. Admittedly, there is no equivalent to the hexameter form in traditional Chinese verse, but prose, especially ji-prose of the historiographical or novelistic type, is simply not the right choice. One must create something like a “blank verse” to accommodate Ovid’s swift and flowing narrative, a “blank verse” without (obligatory) rhyme, and therefore free enough to “re-create” as much as possible Ovid’s poetic qualities. For, what a translator can learn from Ovid consists for the most part in the poet’s verbal art, in the metamorphoses not only of bodies but also of words. In this sense the translator reenacts the poet’s transformative act with his translation of the Metamorphoses into Chinese.

So let us begin at the beginning:

Wei Zhang is a professor of Greek and Latin classics in the Department of History at Fudan University in Shanghai. His research interests include early Greek poetry and the reception of ancient Greek mythology in modern Chinese culture. Wei is also a member of the editorial board for Dickinson Classics Online, which publishes resources for Chinese students and scholars of the ancient Greek and Latin classics. He can be reached at zw1844@gmail.com.

12/04/2020
Come and Take It: The End of Eidolon
Late in the afternoon on November 5, 2020 — close to 24 hours after polls across the country had closed for the...
11/25/2020
Classics Everywhere: Websites Giving Diverse Voices and Students A Platform
The Classics Everywhere initiative, launched by the SCS in 2019, supports projects that seek...
11/16/2020
Blog: Between Charybdis and Scylla: Greeks and Romans in Panama After 1903
On November 3, 1903, the Department of the Isthmus separated from the Republic of Colombia and became its own...
11/09/2020
Blog: Tracing Tragedy: Classical Reception in Modernist Literature
Some months ago, a piece by Leah Mitchell and Eli Rubies on Classics and reception studies in the 21st century...
11/03/2020
Blog: Part II: Casting Cleopatra: It’s All About Politics
(Please Read Part I First) Playing Cleopatra: Hollywood and Anglophone Television Castings For the most part...
END_OF_DOCUMENT_TOKEN_TO_BE_REPLACED

(Un)-Forgotten Realms: Science Fiction and Fantasy in and about the A

The American Journal of Archaeology (AJA) was founded in 18