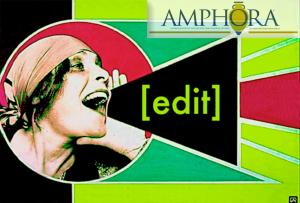 This article was originally published in Amphora 12.1. It has been edited slightly to adhere to current SCS blog conventions.

Elsewhere in this issue, in his article titled The Metal Age, Kris Fletcher discusses the relationship between classical studies and heavy metal music. Examining various metal appropriations of themes, characters, and ideas from classical antiquity, some less orthodox than others, Fletcher notes, “… these songs should remind us that we as classicists do not control this material.” On the SCS website, Mary-Kay Gamel and the Outreach Committee have voiced a similar view concerning the shared understanding of classical material: “We use the word ‘outreach’ not to suggest a one-way communication in which scholars inform others, but a complex interaction in which all involved contribute to a discussion of what Classics is and what it might be.”

Not surprisingly, then, in January the Outreach Committee enjoyed a lively discussion of the role of professional classicists and their students as editors of Wikipedia articles on classical subjects.

Wikipedia is, of course, “the encyclopedia that anyone can edit.” It is also the world’s sixth most-visited website. It is an enormous public forum in which academic experts and the interested public negotiate which facts should be given weight as reflective of a broad consensus of expert opinion. Wikipedia is a site to which many professors say that they turn for information outside their area of specialty. Teachers at leading universities now require that their students actively engage with the Wikipedia community. And these trends seem to be as true in classics as elsewhere. A show of hands at the Outreach Committee meeting confirmed that quite a few professors had edited articles. One member of the committee talked about requiring students to help edit Wikipedia articles. Many other Wikipedia classics editors are students–current or former–who were inspired by these same professors.

The question of the relationship of the credentialed expert to Wikipedia has been a raging controversy since (and, in truth, long before) Larry Sanger’s break with Wikipedia and subsequent publication of “The Fate of Expertise after Wikipedia” (Episteme, 2009). However, there seems to be less debate about the claim that Wikipedia and its users benefit from expert participation.

Wikipedia editing is not easy. One must become accustomed to defending suggestions cogently and succinctly in an open forum in which credentials cannot trump careful research; as an encyclopedia, Wikipedia demands that statements on the site be supported by verifiable citations of authoritative sources. But in many cases, interpreting complex authoritative sources requires special skills, practice, and training. Accordingly, tenacity and patience, as well as tolerance of the misunderstandings of others, are required to succeed as a Wikipedian.

Although demanding the work of editing Wikipedia articles may help to develop the very skills that great teachers possess, and that students must learn so that they can thrive in modern learning communities, be they schools or businesses. As classicists plan their outreach activities and think about ways in which they can engage with enthusiasts outside their immediate professional circle, Wikipedia may offer some interesting opportunities and challenges for those so inclined to share their expertise.