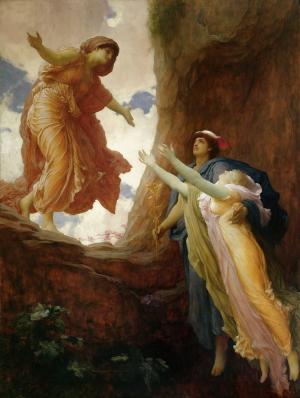 I recently taught the troubling Homeric Hymn to Demeter in my Classical Myth course at Bucknell. On the one hand, this hymn is a story of violence. Three quarters into the hymn, readers find Hades “sitting in the bed with his bashful, very unwilling, wife who yearned for her mother” (ἥμενον ἐν λεχέεσσι σὺν αἰδοίῃ παρακοίτι, | πόλλ᾽ ἀεκαζομένῃ μητρὸς πόθῳ, 343–344). As Jermaine Bryant and Ship of Theses have recently discussed on Twitter, this scene is clear evidence that Hades has sexually assaulted Persephone. On the other hand, the text presents perplexing information about this violence. At the hymn’s opening, the narrator juxtaposes Hades’ kidnapping of Persephone with a reminder that “loud-thundering wide-eyed Zeus gave” her to Hades (ἣν Ἀιδωνεὺς | ἥρπαξεν, δῶκεν δὲ βαρύκτυπος εὐρύοπα Ζεύς, 2–3).  How are we then to understand the role of Zeus, Persephone’s father, in her abduction? I pondered over how to teach this hymn as I flipped through Jenny Strauss Clay’s The Politics of Olympus.

But my thoughts kept wandering away from the hymn to my life over the past twenty months. The 2020 Lunar New Year (January 25, 2020) was the first time in ten years that I got to spend the holiday at home in Shanghai. The flexibility afforded by a dissertation fellowship allowed me to extend my stay in Shanghai past Wisconsin’s winter break. At the time, I was writing a chapter on the study abroad of Cicero’s son Marcus. Working in my childhood bedroom made me particularly sad for Marcus, who never saw his father again after leaving for Athens in 45 BCE. Little could I have known what the Year of the Rat would bring. Wuhan was locked down on January 23, the day before New Year’s Eve. As more and more grim news broke out in the next couple of days, my parents insisted that I should change my ticket and leave Shanghai immediately. I made it back to the U.S. the day before the travel ban was announced. Since then, I have yet to see my family in person again. Sometimes I fear that what happened to Marcus might happen to me as well.

In this uncertain and unsettling time, Hades’ speech and the following scene of the pomegranate seed (360–373) struck me with particular relevance and poignancy. In the hymn, after the sexual assault scene mentioned above (343–344), Hades tells Persephone to return to Demeter with Hermes, who has come with Zeus’ command. Yet Hades also asks Persephone not to resent him, for he has given her the highest τιμαί (honors) among the immortals. The narrator then tells the audience that “very thoughtful, Persephone rejoiced” (γήθησεν δὲ περίφρων Περσεφόνεια, 370) and “quickly leaped up out of joy” (καρπαλίμως δ᾽ ἀνόρουσ᾽ ὑπὸ χάρματος, 371). But Hades looks around and secretly gives Persephone a pomegranate seed to eat, so that she will not remain with Demeter forever.

I asked my students whether “very thoughtful” Persephone knowingly and willingly eats the pomegranate seed so that she can come back to the Underworld to enjoy her new τιμαί. Building on Helene Foley’s commentary, I asked them how to interpret Persephone’s joy at her departure for Olympus. Is it because she can see her mother, or because she knows she can come back to Hades and her τιμαί after seeing her mother? Some students seemed confused by my questions. Persephone must have been tricked, as she reports to Demeter (406–413). How could Persephone even want to come back to Hades after being kidnapped there? Surely she is happy because she can go home? One student commented that perhaps Persephone is too excited to even finish listening to Hades’ speech about τιμαί (362–369) once she hears that she can go back to Demeter (360).  Good point. I asked for other thoughts. I waited. I then shared how I, after eleven years in the US as an international student, interpret Persephone’s joy and the meaning of the pomegranate seed.

When I was in college, the F-1 student visas granted to Chinese citizens were only valid for a year. International students can legally stay in the U.S. after their visas expire as long as they keep their F-1 status by, for example, remaining enrolled as full-time students, or fulfilling the requirements of Optional Practical Training (OPT). However, should they leave the U.S. after the visas expire, barring a few exceptions, they would need to apply for new ones at the U.S. embassies and consulates abroad in order to seek re-entry to the US. This process takes time, and the other catch is that visa renewal is not guaranteed. Therefore, if Chinese students visit families in China after their visas expire, they risk being unable to return to the US.

With a change in visa regulations for Chinese citizens in 2014, most Chinese students can now receive 5-year F-1 visas. That 5-year visa was my pomegranate seed that enabled me to shuttle back and forth across the Pacific during graduate school. Every time I landed in Shanghai, my joy came not only from seeing my parents, but also from knowing that I could fly back to the U.S. after the break.

Study abroad carries drastically different meanings in China and in the US. American-style study abroad usually has a definitive end in sight. Be it a summer, a semester, or a year, American students know, as they leave, when they will come home. For Chinese students, studying in the U.S. sometimes resembles the pre-pomegranate life of Persephone away from Demeter. It is a life that allows us to earn our degrees, launch our careers, and obtain τιμαί unavailable at home. But it is also a life away from home, a life subject to racial and sexual microaggressions , and a life of not knowing when or if we will reunite with our parents, grandparents, and loved ones.

Amid the ongoing pandemic and the increasing geopolitical tension between the U.S. and China, thousands of Chinese students like me have been separated from our families across the ocean. Our families have not been able to visit us because of myriad COVID-19 travel restrictions in both countries. (It is only very recently that the Biden administration announced a plan to lift the travel bans on most travelers from Mainland China, UK, Ireland, Schengen countries, Iran, Brazil, India, and South Africa.) We — particularly Chinese graduate students in STEM fields — are hesitant to go home out of the fear that we may be denied re-entry to the U.S. and have to relinquish our τιμαί. We have lost our pomegranate seeds. Browsing through the visa section of 1point3acres, a popular online forum among the Chinese diaspora in North America, I felt I understood the Homeric Hymn to Demeter a little better.

I told my students about my 5-year visa, but I did not tell them that this visa has also expired. My pomegranate seed is gone. As we proceeded to the next topic on the syllabus, my thoughts lingered over the hymn. Since then, I have wondered whether I have been mistaken all along. Perhaps it is the prospect of seeing Demeter that makes Persephone “rejoice” at Hades’ words. Perhaps I, with or without a visa back, will also “leap up out of joy” the next time I land in Shanghai, just because I’ll be home.

Ximing Lu (陆西铭) is a Visiting Assistant Professor of Classics & Ancient Mediterranean Studies at Bucknell University. He received his PhD in Classics from the University of Wisconsin-Madison in May 2021 after completing his dissertation “The Ciceros in Athens: Study Abroad and Roman Politics.”

05/23/2022
Blog: Contingent Faculty Series: An Interview with Victoria Austen
Our seventh interview in the Contingent Faculty Series is a virtual conversation between Dr. Taylor Coughlan and...
04/13/2022
Blog: Two Years Later: “Classics” after Coronavirus?
In an April 2020 post for Eidolon, I gathered predictions on “classics after coronavirus.” Two years later, it’s...
04/08/2022
Blog: Ancient Worlds, Modern Communities: Increasing Accessibility for the Study of the Ancient World
The Ancient Worlds, Modern Communities initiative (AnWoMoCo), launched by the SCS in 2019 as the Classics...
03/21/2022
Blog: I Love You, I Hate You: A Student’s Perspective on Learning Latin
I have always enjoyed Latin class because it felt like a puzzle, much like math. Find the verb, find the noun that...
03/18/2022
Blog: Power to Punish and Authority to Forgive: Imperial State and Imprisonment in 4th-Century Antioch
Research ideas often develop out of chance encounters or unplanned circumstances. My dissertation project was born...
END_OF_DOCUMENT_TOKEN_TO_BE_REPLACED