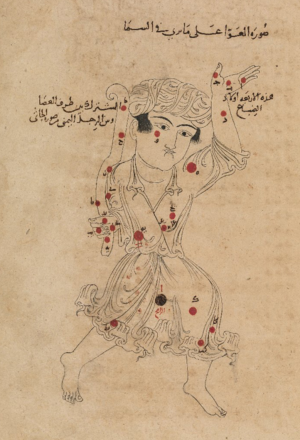 A longstanding tendency to ethnocentrism and Hellenophilia implicit in the narrative of the rebirth of Greek science in the Renaissance has shaped the historiography of science and early modern historiography more generally. However, a digital project called Ptolemaeus Arabus et Latinus (PAL) presents an interdisciplinary, broadly conceived, and ongoing (2013–2038) challenge to this , which lies at the crossroads of Classics, Arabic Studies, History of Science and Digital Humanities. It presents a wide range of primary sources as well as translations and critical editions. Given these unusual features some words of introduction are needed to better understand the relevance of this project for the humanities at large.

It is known that Thomas Aquinas encountered Aristotle through consulting translations from Arabic into Latin, and the works of Ptolemy circulated in the Latin West thanks to translations from Arabic until Greek astronomical sources came to the West through Byzantine intermediaries and manuscripts hunters, but only in the fifteenth century. The problem of the encounters of Latin and Greek realms with the “Arabic element” is far from being fully acknowledged in all its complexity and its implications into the present. In spite of recent advances in our understanding, there is still much to be assessed in terms of the influence of Arabic thought in Europe, especially about the reception of the Quran as, well as Arabic sciences and medicine, in Europe and their impact on European cultural realms and institutions. To what extent are these phenomena explainable in terms of reception and rejection; was this transfer of knowledge dependent on travelers between Europe and the Orient? Were the advances of astronomy in the Renaissance indebted to Arabic models, and, if yes, to what extent?

Such a complex situation needs a wide array of primary sources and interdisciplinary efforts in order to develop critical tools to answer the questions it poses. This review assesses a project which is coping with an important side of this research field.

Funded initially in 2013 for a period of 25 years by the Union der deutschen Akademien der Wissenschaften, PAL is now hosted by the Bayerische Akademie der Wissenschaften in Munich, and has already provided noteworthy results and excellent resources to scholars.

It is worth noting that the location of the project in Munich is dictated not only by financial factors but finds full explanation in terms of cultural and academic tradition. The Bavarian capital has a long and outstanding scholarly tradition of Classics, Byzantine Studies, Arabic Studies, History of Mathematics, Science, and Technology. Alongside the PAL’s host Akademie der Wissenschaften, remarkable collections of primary and secondary sources and research clusters are found nearby, such as the Bavarian State Library (Bayerische StaatsBibliothek), the Ludwig-Maximilian University (LMU), the Technical University (TUM, with a special center for the history of science and technology, Münchner Zentrum für Wissenschafts- und Technikgeschichte), and the Research Institute of the Deutsches Museum. Among the most renowned exponents of this rich scholarly tradition are the Arabist Paul Kunitzsch and the mathematicians and historians Kurt Vogel and Menso Folkerts.

As one can see from their website, PAL aims at thorough treatment of the Arabic and Latin versions of Ptolemy’s astronomical and astrological texts and related materials, such as commentaries, astronomical tables, ephemerides and horoscopes. Three main categories of texts are objects of examination, edition, and study, directed at a better understanding of Ptolemy’s reception in the Arabic/Islamic world and Latin/Christian Europe up to 1700 CE:

Some texts are already provided online in high resolution images, and some of the works are equipped with a diplomatic transcription. The catalogue currently contains full metadata for 74 Arabic manuscripts, including 13 works of category A (authentic works in Arabic translation), two from category B (pseudepigrapha), and 42 from category C (commentaries). There are images for six of these 74 Arabic manuscripts, and diplomatic transcriptions for four, including Books 1–6 of an Arabic translation of the Almagest from a manuscript in Leiden. ill. 1: transcription from an Arabic translation of Ptolemey’s Almagest, with image of the manuscript in Leiden

ill. 2: transcription of a Latin translation of Almagesti minor, with textual notes and embedded images of diagrams

PAL includes a large glossary of technical terms in Greek, Latin, and Arabic, equipped with English and other translations, known synonyms, and references to the corpus. 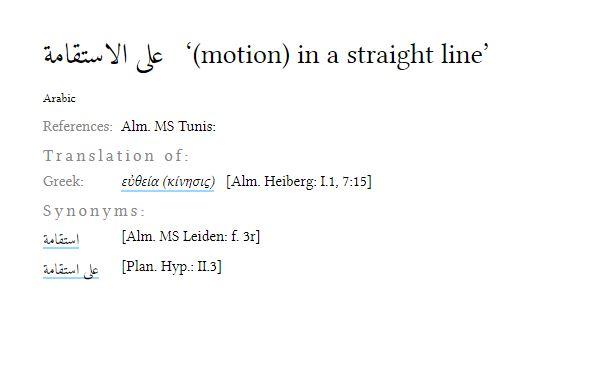 The database view of this glossary is sortable by concept, term, language, and other criteria. 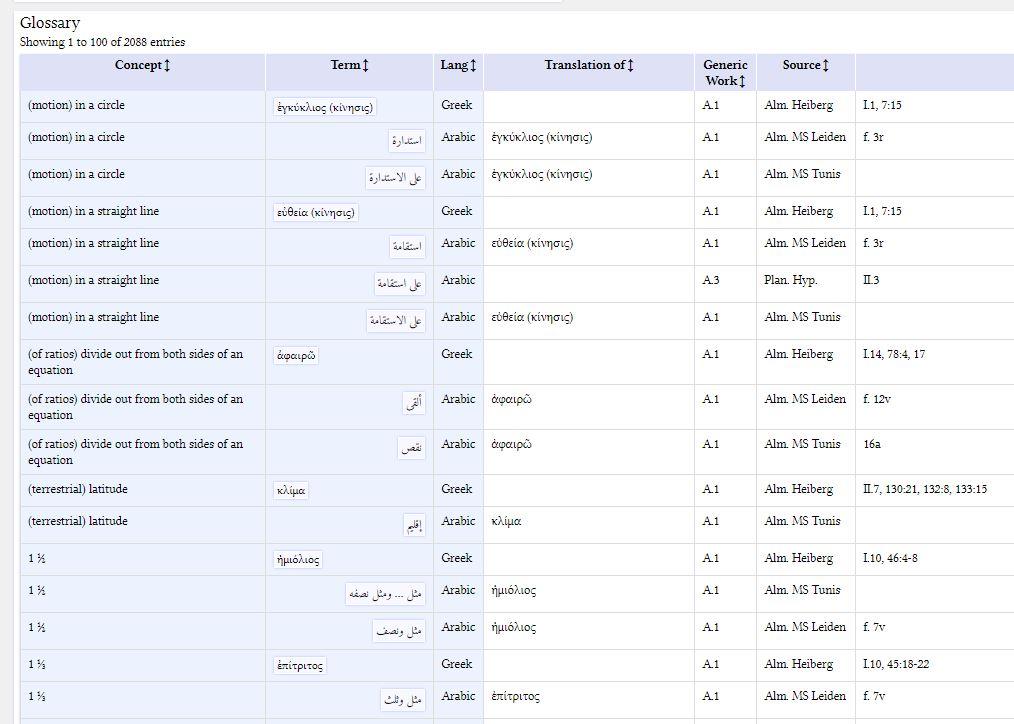 Each entry in the catalogue of texts provides a structure of the text with book titles, a summary of the history of the work under consideration, a full bibliography, a list of edition(s) (if any) or editio princeps, a list of manuscripts providing the work, and a list of commentaries thereon (if any). 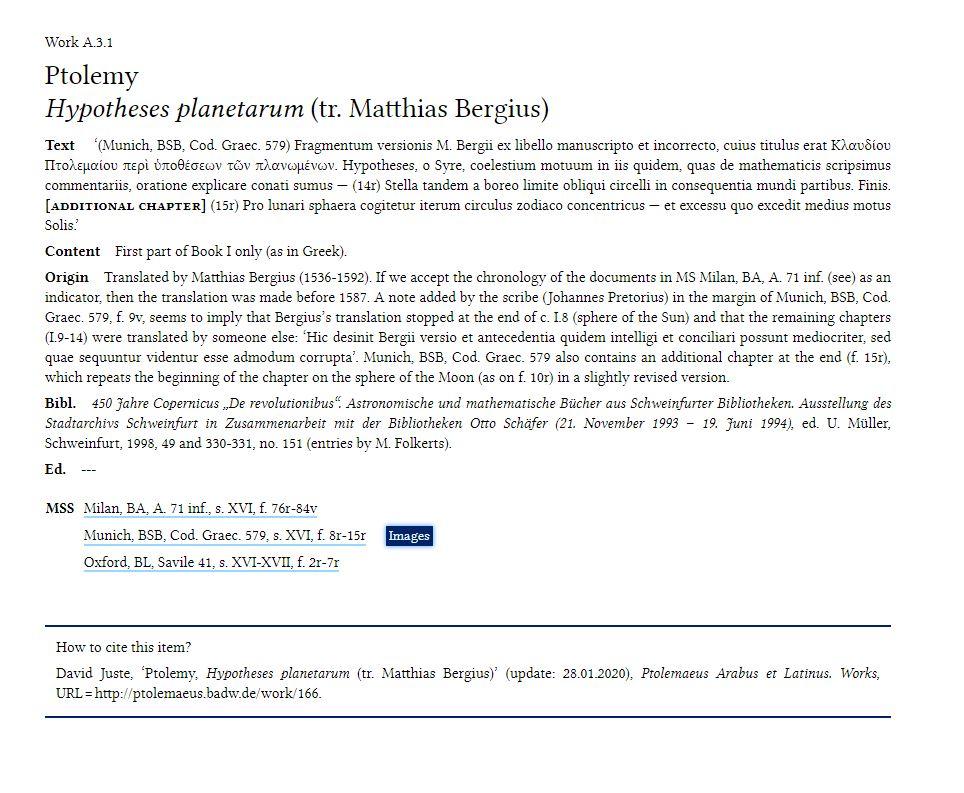 ill. 5: sample catalogue entry with descriptions, list of MSS, and link to images

Some of the transcriptions have become full critical editions, such as the Almagesti minor recently published in print by PAL member Henry Zepeda. In the online PAL platform one reads a standardized transcription (following explicitly defined transcription rules) alongside the related page of a manuscript benefitting from a minimal critical apparatus, while the full critical edition is published on paper. This treatment is planned also for other significant Ptolemaic works. According to the project outline (section 5) their concept of significance in the Ptolemaic tradition refers to “influential texts which played an important role in conveying Ptolemy’s ideas and especially those texts which expand on, correct, question or criticize Ptolemy’s original texts, as opposed to mere paraphrases and commentaries for educational purposes.”

Concluding Remarks and a Proposal

The digital tools provided by PAL are user-friendly, work stably in different browsers, and can be used with profit to inspect primary sources, bibliography, and to get cross-references in the Ptolemaic corpus. This achievement stands among the valuable results of the paleographical and philological traditions of the Mitteleuropa-school. That it combines accuracy of detail with the accessibility of the open digital humanities is an added benefit.

As the project is incomplete it is too early to provide a full assessment. The project has not yet made known to the public how it intends to develop a strategy to integrate the data gleaned from the primary sources into more general debates, such as those concerning the reception of the Arabic astronomy into Renaissance Europe, hence how it aims to cope with the problems of ethnocentrism which so far have marked the history of astronomy, and how would it tackle such a task, given the choice not to explore Greek sources. It is obvious that the PAL team is aware of the western historical genesis of the categories we use in the history of science, but I would very much like to know whether they are going to use them dogmatically, or how they would enlarge and recast their meaning through their comparison with other historical-cultural worlds. Their research cluster is the ideal framework for this second option.

Moreover, a scholar conscious of the wide potential of the PAL project would be curious to know more about some questions, which I summarize as follows.

At the present state of the project, it might be too early to cope with these questions, but I hope that the PAL team will receive them constructively and start to think about the possibility to enlarge their dissemination activity and make it more frequent, for example by being more active in the news section of their website or by opening a blog or videos series for non-specialists in which they would comment on their discoveries and explain the usefulness of their databases and glossaries.

DESCRIPTION: Arabic and Latin versions of Ptolemy’s astronomical and astrological texts and related materials, such as commentaries, astronomical, ephemerides and horoscopes. Includes authentic works, such as Almagest, the Tetrabiblos, and the minor works: Analemma, Phases of the Fixed Stars, Planetary Hypotheses and Planisphaerium; works falsely ascribed to Ptolemy, such as the Centiloquium, but also other astronomical and astrological works; commentaries to Ptolemy’s works and to works falsely ascribed to Ptolemy.

Alberto Bardi is an historian of science and philologist. Among his latest publications are: Islamic Astronomy in Fifteenth-century Christian Environments: Cardinal Bessarion and his Library. Journal of Islamic Studies 30.3 (2019): 338–366; Mathematics and Cultures across the Chessboard: The Wheat and Chessboard Problem. In B. Sriraman (ed.) Handbook of the Mathematics of the Arts and the Sciences (Springer, 2019). Currently, he is Polonsky Fellow at the Polonsky Academy for Advanced Study in the Humanities and Social Sciences of The Van Leer Jerusalem Institute

07/01/2022
Blog: Ancient Worlds, Modern Communities: Contemporary Responses to Greek Myth and Tragedy through Drama, Film, and Visual Art
The Ancient Worlds, Modern Communities initiative (AnWoMoCo), launched by the SCS in 2019 as the Classics...
06/29/2022
Blog: “Deeply rooted in history”: Teaching abortion ancient and modern in a post-Roe v. Wade world
With weary hearts, we consider with you what Classics can do in the face of Dobbs v. Jackson Women’s Health...
06/27/2022
Blog: Teaching in a Time of Anti-Asian Violence: Reflections on Asian & Asian American Experiences in Classical Studies, Part 1
This two-part series reflects upon AAPI experiences in Classical Studies. Part 1 is catalyzed by the author’s...
06/25/2022
Blog: Roe v. Wade, the GOP, and echoes of Augustus: Reproducing fascism
I guess I should say “thank you.” Gratias vobis ago. Thank you to the Republican Party’s long game, a partisan...
06/20/2022
Blog: Paternalism and the “Good Slave” in the Speech for Phormion and the Legacies of Slavery
In a discussion of the concept of the “good slave” in her book Reconstructing the Slave: The Image of the Slave in...
END_OF_DOCUMENT_TOKEN_TO_BE_REPLACED