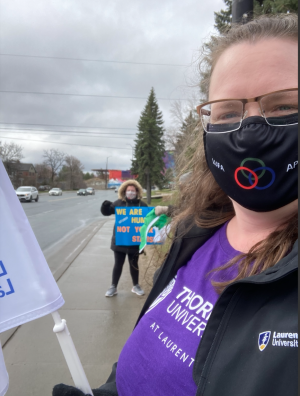 In some ways, I’ll be honest, it’s a bit of a relief to be “only” a sessional for a while. After years of struggling to make our program viable (or make administrations realize it already was) and wrestling with all the frustrations and personalities and administrative work of a small department, I suddenly only have to worry about teaching a couple of courses. Not having any other responsibilities — for enrollment, for curriculum development, no service work or meetings — it’s a lot less stress. Everything is somebody else’s problem.

On the other hand, that same sense of relief brings home sharply how dangerous it is for departments to become more and more staffed by contingent labour. I don’t have a real stake in the program, and my knowledge and experience aren’t contributing anything to the longer-term development of the department or field. No program can continue without commitment and long-term thinking from its faculty, and the conditions of contingent employment actively discourage those. While the detachment I feel may be stress-relieving right now, I can also already feel how it might lessen my motivation for teaching over time. Right now, I honestly can’t tell whether the ability to focus only on teaching will make me better at it or worse — and it’s uncomfortable to think that something around which I’ve built so much of my identity over the last 15 years could turn out to be so literally contingent on my working conditions.

(Disclaimer: this is all about me, and I’m not suggesting other people aren’t invested in their positions and teaching! But if they are, it’s in spite of their conditions, not because of them.)

On the larger question of how I feel about academia in general: I can’t deny that it has made me even more cynical than I already was. I have spent my whole life in school, in one way or another — I went straight through all my degrees, in Classics the whole way — and, while I’ve gradually lost most of my starry-eyed optimism about the field and the job, until the last two years, I still felt that the majority of people involved in the university did in fact care about the central goal of teaching.

But watching the humanities division of an entire university be dismantled before my eyes, with literally no acknowledgment of the faculty members as even involved in the mission of the university throughout 95% of the process, has made me question even that. It has reminded me forcefully that academia is just a job, that our employers are just that, employers — they have no more loyalty to us than any other bosses, no matter how personally caring they may be. I look back on a lot of the work I did to try to make our program seem “worthwhile” to the administration and I wonder if any of it was worth it. I don’t regret the time I spent on teaching and students, for the most part, but the rest of it seems like a waste of energy that did material harm to me and my family.

JN: In addition to being a teacher and a scholar, you do a lot of public outreach, particularly through The Endless Knot, a podcast that you co-host with your husband, Mark Sundaram. One of the great things about this podcast is that you spotlight the work of a lot of junior scholars. How has this work shaped your relationship with academia?

AM: First, I think it’s worth pointing out that this project, and the video series that it stemmed from, are both products of contingency themselves. My husband needed something meaningful to work on, something that was under his own control, after years of the disappointments and frustrations of sessional teaching. He created the YouTube channel to share his knowledge with an audience wider than he could reach in a classroom, and our podcast grew out of that. So it has always been informed by a certain disillusionment with the formal university setting as a privileged place of instruction and learning.

As the podcast has grown over the years, and I’ve become more involved with the independent educational podcasting community, it’s been striking how few of the podcast creators were working academics. While, to some extent, this has been changing in the last few years, it was clear that one of the reasons for this was that academia, by its very structure, discouraged people from engaging in such projects. Academics didn’t have the time, and the mechanisms of hiring and promotion and tenure and grants did not acknowledge public engagement as valuable and useful enough to be anything other than a side-project.

I was lucky to have a department that valued my work enough to allow me to spend some of my time on it, but also I grew more and more convinced that it was one of the most important things I could do with the immense privilege I had — the privilege of doing degrees in a subject I was passionate about, and of the sort of security (I thought) that allowed me to put this time into something that didn’t make money. The use of the platform to showcase early-career scholars was a natural extension of that feeling. And paradoxically, talking to scholars who are excited about their work has, in fact, in some ways made me love our field more, even as I become more and more acutely aware of its failings. We would have nothing to share with our audience if this work wasn’t going on in universities, and that makes me even more sad to see how fragile the structures are that support that work.

JN: I would like to bring us full circle. Your story both reflects the tenuous position of small departments and the profound transformation of the faculty position in higher education, which leads me to ask, why pursue contingent positions at all?

AM: I’m not sure that I will continue to pursue contingent positions. I did so this year because I wanted to try, at least once, to find another full-time job. I also felt, to be honest, a lot of panic at the idea of losing my identity as a teacher/professor, so suddenly and unwillingly. And even though it’s a lot of work and doesn’t pay very well, I can say pretty definitely that it’s been quite good for my mental health to have some continuity and the familiar rhythms of the academic routine this fall, after so much change and uncertainty over the last two years.

But that won’t last. For one thing, as a family, we can’t survive on contingent teaching past this year; but also, I don’t have the heart for it. I always wanted to be a professor. I hoped I would be one until I retired, but if I need to move on, I think I can accept that. (Though I’ll admit I’m teary-eyed as I type this; the coping process is ongoing.) I consider myself exceedingly fortunate to have had this career for as long as I have, and to be able to move on to something else that pays the bills.

JN: Under these circumstances, how do you think we can create a future that is sustainable not just for the field, but for those of us working in it?

AM: I wish I knew how to answer that! If I don’t see a sustainable future for myself, how can I begin to imagine one for us, collectively?

One of the effects of contingency is that it puts me into a different union than the full-time faculty. That’s a big problem, because the future of university programs depends on a unity of purpose among all faculty, not divisions according to status. But it’s a chicken-and-egg problem: the divisions are a result of the structures of the university, but to change those structures, we need to erase the divisions. It doesn’t have to be unions, but I do think that if we are to have a future as a field, it has to come from finding common cause, and from those with a modicum of privilege and security looking for ways to join with those who don’t. There is immense inertia in a system like we have right now, and the only way to fight that inertia is with a lot of people pushing together.

I think we need to remember that we are workers, doing a job, and that the fact that we are passionate about it doesn’t make it any different from all the other jobs out there. We need to think like workers, who need good working conditions in order to do the best job possible, while also living full and healthy lives. And we need that all the way along — there should be no stage of a career in which you’re expected to work too hard and be paid too little, in return for a better job down the road. Even if that better job weren’t more and more mythical every day, that model simply isn’t humane, and it will never produce as good teaching and research and outreach as will be done by people who are financially stable and able to engage with and invest in their field.

Aven McMaster completed her Ph.D. at the University of Toronto in Latin poetry and social history in 2010. She works on Republican and Augustan poetry, patronage and obligation in Roman literary society, Roman sexuality, and reception. From 2007 to 2021, she taught full-time in the Ancient Studies Department at Thorneloe University at Laurentian in Sudbury, Ontario, Canada, gaining tenure in 2014. With the closure of Thorneloe, she lost her job at the end of June. She’s currently teaching on contract for Saint Mary’s University in Halifax, Nova Scotia, Canada. Aven also co-hosts a podcast and co-produces a series of YouTube videos about etymology and history. She is on twitter at @AvenSarah.

01/24/2022
Blog: RU an Antígone?
RU an Antígone?, a play based on Sara Uribe’s Antígona González, was performed by Rockford University students on...
01/21/2022
Blog: News from Vermont: The Ambrose Graduate Fellowship in Classical Languages
Happy news and an update on affairs at UVM. A generous gift from Emeritus Professor Z. Philip Ambrose will let...
01/18/2022
Blog: Asterion: Making Neurodiversity Visible in Classics
As an autistic classicist, one of the things I’ve always struggled with is social interaction. In class, I teach...
01/09/2022
Blog: Inclusive and Culturally Responsive Teaching in Classics
Like many educators, I have found myself in an endless loop lately of thinking and rethinking my teaching...
01/07/2022
Blog: A Digital Ethnography of a Conference in a Crisis
To write about the Capitol Insurrection, as the one-year anniversary approached, I went back through my chat logs...
END_OF_DOCUMENT_TOKEN_TO_BE_REPLACED