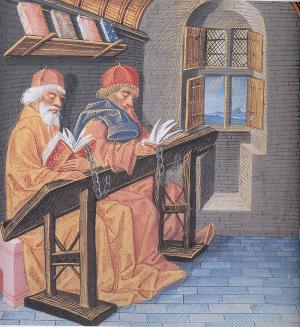 Housed at the Université catholique de Louvain, Hodoi Elektronikai: Du texte à l'hypertexte is a freely-available digital repository of ancient Greek texts, intended especially for students of language and history. It is part of Leuven’s Bibliotheca Classica Selecta—overseen since 2015 by Paul-Augustin Deproost of Université catholique de Louvain—which also houses the Latin-language site Itinera Electronica. Bibliotheca Classica Selecta was begun in 1992, and the Greek texts were uploaded into the environnements hypertextes of Hodoi Elektronikai between 2005 and 2010. As of July 2, 2010, by the site’s own count, the corpus contains 98 authors, 1378 works, 543,825 different forms, and 11,010,080 total words.

By web standards of 2016, roaming the hodoi of Hodoi Elektronikai feels downright medieval: ponderous full-page refresh at each click, barebones layout, no real support for mobile, evident linkrot. But I found this site charmingly medieval, like a magical scriptorium.

Start by browsing the index of authors. Want a copy of a text? Click the author’s name, then select the title, followed by book or chapter, and the site will serve up your selected Greek text with side-by-side translation, usually French. Curious about a word? Click on it to see other instances in the text with a concordance tool. Excited by your find? Share the page by linking to its URL.

Like a philological sorcerer, the user of this website can effortlessly rearrange a text’s words by frequency of occurrence or alphabetically. Alphabetizing can be either left to right (i.e. normally), or right to left—perhaps useful for reviewing noun and verb endings. Sometimes this dazzling sorcerer's display of words is information without wisdom. The concordance tool does not lemmatize forms, so the frequency counts do not tell the full story: οὐδείς (acute accent) is counted separately from οὐδεὶς (grave) and οὐδεμιᾶς. In Book 4 of Pausanias, each of these forms occurs once; but it would be more useful to know in sum how many times οὐδείς occurs in any form, as compared to other words.

In addition to the search feature, the site has a Greek-French lexicon (search by form or by lemma, with or without diacritical marks) and a French-Greek lexicon—or rather a facility for searching the site’s French translations. Reference materials include a summary of Greek grammar and introductions to selected authors, for example Plutarch and Aesop.

In addition, the corpus contains the Septuagint, and Christian writers such as Justin Martyr, Clement of Alexandria, Origen, Basil the Great, Gregory of Nazianzus, and Gregory of Nyssa. In fact, this collection might be particularly suited for a Cassiodorus who sees knowledge of pagan authors as preparation for reading later Christian ones. One quirk in the choice of texts, perhaps befitting the Catholic institution: there is no Greek New Testament.

Hodoi Elektronikai does not provide any source for its digitized Greek texts. Occasionally the texts reveal editorial inconsistencies. For example, at Plutarch, Life of Alcibiades 23.8, the text has πράσσειν, though at 6.4 and 39.1 it has πράττειν. Many translations are attributed to remacle.org, an impressive hobbyist website containing unsourced Greek texts and French-language translations, some of them penned by proprietor Philippe Remacle (d. 2011).

For the casual reader, the transcription errors on Hodoi Elektronikai are rare and more or less easily overlooked. For example, at Plato, Symposium 176B, the text reads ῤᾷστα (smooth breathing). More seriously, at Aratus, Phaenomena 701, the text reads Ἰχθῦς, though the sense requires nominative singular Ἰχθύς. After reading dozens of pages from various authors, I can report only minor errors of this sort. The texts may not be authoritative, but they are also not rife with typos. The texts on Perseus, which I consulted for comparison, have more transcription errors by a large margin.

So why should anyone use Hodoi Elektronikai when there are other websites with larger corpora and more powerful tools? The side-by-side translations are welcome, the concordance tool is fun, and the search feature works. Hodoi Elektronikai has its medieval charm, and for students of language and history, it is worthy of a pilgrimage.