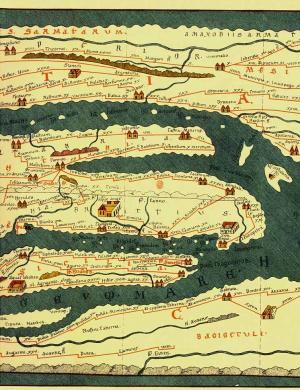 The data backbone of the model is a network of cities, roads, rivers, and sea routes reflecting conditions around 200 CE (with some additions from Late Antiquity). The model includes 632 sites, of which 301 are sea ports. The baseline road network encompasses 814 road segments, about 85,000 kilometers (52,600 miles) and 28,000 km (17,400 m) of navigable waters. Sea routes link 513 pairs of sites. Locations, names, and travel routes are mostly based on modern scholarship, such as the Barrington Atlas of the Greek and Roman World. The simulation of expense is based on the tetrarchic price controls edict of 301 CE.

To calculate a route in the simulation, the user selects the start and destination from the drop-down menu or from the map, and chooses between different travel options, including time of the year, priority (fastest, cheapest, or shortest connection), type of route, modes of transport (depending on the nature of the route), and transfer cost (i.e. the cost added to any transfer change, e.g. from river to sea). The “Calculate route” button generates a preferred path, with fastest priority in purple, cheapest in green, and shortest in yellow. Individual sites can also be excluded or included in the route by selecting the “Exclude/Include Site” button on the map, and specific travel modes can be deactivated from the menu. The bar below the map provides details about the required days of travel and distance covered. A simple timeline shows distance, costs, and time involved between each stop along the route, displaying different options depending on the travel mode. The menu on the right allows different visualization options, including regions, site names, and terrains. The user can also download the routes in SVG format.

Network diagrams are accessible by clicking on the “Network” tab on the left, or by clicking on a specific site and then “Network.” Network diagrams allow calculations of the connectivity between one chosen site and all the other sites included in the network. More distant sites, based on different priorities, are displayed in darker colors. The bar on the lower right offers a legend to interpret the cost measure of each site, based on money, distance, or days of travel, depending on the priority set by the user.

The network can also be visualized as a dynamic distance cartogram, which can be selected by clicking on the “Cartogram” button in the bar below the map. This visualization distorts the geography according to the cost or distance between individual sites and the central site of the network. The user can go back to the original representation by simply clicking “Georectify.”

The results can also be displayed territorially as cost contour maps by clicking “Zones.” This option reveals regions of similar connectivity cost based on the chosen central point within the network. This view often reveals surprising results, emphasizing how geographically closer places are not necessarily the best connected to the network center: in the image below, for example, reaching Ierusalem from Cappadocia takes more economic effort than travelling from Corinth or Carthage.

The results of calculations of two or more networks of the same priority can then be clustered by clicking “Cluster” on the right menu. This function shows which sites are closest, in terms of the priority chosen, to the center point of each network. In the final result, the “Zones” button allows to display each cluster as a colored region.

The “Flow” option generates a Minard diagram, which aggregates results of path segments calculated along the route from or to a selected site. The result is a display of the main arteries of transportation according to the network center, depending on priority, time, and mode settings. Most popular segments are recognizable by thickness.

The user interface of Orbis is excellent: a step-by-step tutorial is available for first-time users, with easy pop-up explanations for every part of the simulation. Hovering the mouse on single options generates short captions for each feature, whereas the discussions in the “About” section give a more exhaustive explanation of the system and its scholarly and technical framework, even including video tutorials. Most of the primary data is also available on GitHub.

Several factors invite caution in relying on Orbis alone as a research tool. Simulation models tend to enforce a deterministic approach that makes specific statements about reality, without always being substantiated with historical evidence. The data backbone of the model mixes several types of evidence coming from slightly different chronological and historical contexts, including information from secondary sources, without discriminating between different types of data. The application was clearly conceived as a large-scale simulation, and more complex geocomputational simulations need to be made in order to incorporate the model into a sophisticated research workflow. The application is thus not sufficient in itself for small-grained simulations, or for answering complex research questions that have to consider the specificities of the historical evidence. The authors, however, are fully aware of these limitations, and they accurately discuss the reasoning behind their choices in the documentation: users should carefully read those discussions to become more familiar with the premises of the model.

Despite its limitations, Orbis is a powerful tool for research and teaching, and an important demonstration of the potential of digital methods in geospatial modelling. The increasingly generalized availability of sophisticated quantitative methods in the digital world is a fundamental resource for improving research. For these reasons, an expansion of the model to more fine-grained research and different historical contexts is highly desirable. In fact, Orbis has already inspired further work of this kind. A “descendant” of Orbis, al-Thurayyā, was created in 2013–14. It encompasses a geospatial model of the early Islamic world, essentially based on the route sections described by Georgette Cornu’s Atlas du monde arabo-islamique (1983). al-Thurayyā includes a travel simulation, but also a network model mapping connections between settlements across provinces.

DESCRIPTION: a simulation model of travel conditions across the Roman world.

Chiara Palladino is Assistant Professor of Classics at Furman University. She is currently involved in various interdisciplinary projects, including the Perseus Library, the Pelagios Association, and including the Mellon-funded grant “A framework for annotation interoperability”, in collaboration with Johns Hopkins and Tufts. Her current research involves the investigation of meaningful linguistic patterns in premodern geographical narratives and the transmedial representation of descriptive geographies through digital mapping and non-GIS visualizations.

07/01/2022
Blog: Ancient Worlds, Modern Communities: Contemporary Responses to Greek Myth and Tragedy through Drama, Film, and Visual Art
The Ancient Worlds, Modern Communities initiative (AnWoMoCo), launched by the SCS in 2019 as the Classics...
06/29/2022
Blog: “Deeply rooted in history”: Teaching abortion ancient and modern in a post-Roe v. Wade world
With weary hearts, we consider with you what Classics can do in the face of Dobbs v. Jackson Women’s Health...
06/27/2022
Blog: Teaching in a Time of Anti-Asian Violence: Reflections on Asian & Asian American Experiences in Classical Studies, Part 1
This two-part series reflects upon AAPI experiences in Classical Studies. Part 1 is catalyzed by the author’s...
06/25/2022
Blog: Roe v. Wade, the GOP, and echoes of Augustus: Reproducing fascism
I guess I should say “thank you.” Gratias vobis ago. Thank you to the Republican Party’s long game, a partisan...
06/20/2022
Blog: Paternalism and the “Good Slave” in the Speech for Phormion and the Legacies of Slavery
In a discussion of the concept of the “good slave” in her book Reconstructing the Slave: The Image of the Slave in...
END_OF_DOCUMENT_TOKEN_TO_BE_REPLACED