Blog: What Do We Mean When We Say “Diversity”? Addressing Different Kinds of Inequity 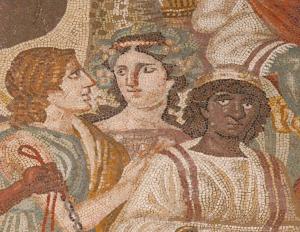 In the past year, the Society for Classical Studies website has published a number of pieces catalyzed by the blatant racism on display at the most recent annual meeting. Professor Joy Connolly wrote a piece called “Working Toward a Just and Inclusive Future for Classics,” which then generated a response by an anonymous graduate student group, which in turn led to further comment by the SCS, Professor Connolly, and the newly formed SCS Graduate Student Committee. These various pieces pointed to ways Classics could progress and thrive for generations to come.

What became lost in this series of posts was a focus on racial diversity and inclusivity, as the conversation increasingly broadened to include all manner of injustice found in academic work conditions. The act of racism that started the conversation became overshadowed by much more general discussion about problems that affect the whole of academia, e.g., the increasing precarity of academic labor.

We can see how this happened. As the anonymous graduate students and others have pointed out, entry for people of color to the field of Classics is from the outset hampered by the dearth of academic jobs awaiting new Ph.D.s at the end of their graduate careers. But what became a call for diversity and inclusivity quickly shifted to a call for justice for all graduate students. Almost imperceptibly, the problems facing people of color in academia were compared to and eventually obscured by the problems facing graduate students and early career scholars more generally.

These are not mutually exclusive groups, of course. There are, of course, graduate students of color in Classics––but being a person of color is a permanent identity while graduate student or early career status is supposed to be temporary. And we have noticed that calls to address academic inequities seem to borrow heavily from racial or social justice rhetoric, to the point of diluting the original aims of such rhetoric.

As two professors currently on different employment tracks, we came together to have a conversation about the forms of inequity built into academic labor systems and how this injustice intersects with––but remains distinct from––racial injustice. We both try to be aware of and sensitive to problems of social injustice, in academia and beyond. Certainly we do not claim to understand or represent every single marginalized voice in Classics. But we hope our respective positionalities have informed some helpful insights into the ways we talk about injustice, and we hope too that the questions we raise in our conversation below provide some constructive food for thought.

Arum: As a person of color in one of the whitest of the humanities fields, I have definitely noticed the blind spots of Classics and Classicists in terms of racial sensitivity.

Joy: And as a member of the academic precariat who inches closer to giving up on a “real” job every year, I have plenty to say about structural issues––in Classics, of course, but really humanities- and higher-education-wide too. But that said, while I may be young, female, untenured, and on yearly contracts...I'm also white, cishet, able-bodied, and from a financially comfortable family. In terms of intersectionality, I see a lot more places where I ought to listen and amplify than places where I feel obliged to speak up.

Arum: By contrast, I am in a tenure-track position; while my path here was long and certainly not easy, I actually found such a path. I was lucky. I recently read a piece on the odd blend of privilege and oppression underlying the position of a person of color on the tenure-track, and I was struck by the unique insights and responsibilities that come with such a position. Also, as a language and literature person, I have fit pretty squarely into Classics and not dealt much with the problems of disciplinary identity that have been discussed in this blog.

Joy: It’s probably impossible to talk about inequity in our field(s) or in academia more generally without borrowing terminology from the language of social justice––and it’s made more difficult by the simple fact that academia is set up as a hierarchy, with the route from assistant to associate to full professor. Arguably, any such system will have a certain amount of unfairness built in even before you consider the addition of adjunct and contingent faculty, who don’t really fit in anywhere along this exclusive “track.” What worries me, though, in these discussions is how quickly things tend to get conflated; how easy it is to pull out a single thread of a larger tapestry and use it as a jumping-off point to talk about alternate types of bias; and how quickly the narrative can then be shifted to other issues beyond race. In true philological fashion, I keep thinking of an apropos quotation from Timon of Phlius:

Many people are pastured in multicultural Egypt,
the closeted bookish types ceaselessly quarreling
in the Muses’ birdcage.

Our field may not be particularly πολύφυλος in the racial sense, but we have a lot in common with the Hellenistic scholar-poets in our academic cricket-cage. When we talk about injustices in the field, what are we characterizing as injustices––are they all equal? When we call attention to a problem in Classics––e.g., citational injustice, lack of conversation across subdisciplines––what is the greater purpose we are serving? And what is the nature of the injustice we are addressing? Does it have the same priority as racial or social injustice? In what ways do they overlap? I wonder if part of this doesn’t stem from a conflation of structural forces and personalized animus: is a senior scholar trying to silence someone by denying them a citation, or is it a moment of inattention or laziness?

Arum: What you’re saying makes me think of how racial or social injustice can get diluted when we talk about more general types of inequity. It is telling, I think, that a recent Eidolon headline completely obscures the WOC identity of the author of the piece. Instead, the headline puts the focus on the difficulties of teaching in a Catholic school. Such difficulties are undoubtedly present, but there are particular difficulties for women and people of color that are addressed in the piece but not signaled by the headline. This obscuring was likely unintentional, but it is a revealing example of how gendered and racialized experiences can be and have been subsumed under more generalized accounts of difficulty.

Joy: One thing I’ve learned from studying movements in the past is that there is real power to be found in solidarity and community, in people with different needs, interests, and experiences with oppression working together for the common good of all. But we need to learn from all aspects of these struggles. We can first acknowledge the ways in which movements have fallen short: the racism in the women’s suffrage movement of the early 20th century, the sexism in the labor movement: all of it.

Solidarity doesn’t and shouldn’t mean appropriation or erasure. When we come together to make Classics and academia more inclusive, that shouldn’t entail appropriating language or experiences specific to particular identities, to the effect of erasing such experiences and identities. If the word “diversity” is applied to all social, economic, or political issues, it loses its potency in communicating pivotal issues surrounding race. And when we (rightly) engage in meta-disciplinary discourse to identify the flaws of Classics as a field, we hope each of us is simultaneously engaging in self-reflection about what wrongs we are trying to redress, how our own actions might have contributed to these wrongs, and what our individual roles going forward might look like. There’s a think piece that sums that point up well: we’ll never be able to fight injustice in others (or in our field as a whole!) if we’re unable to admit to it when we find it in ourselves.

Header Image: "The Triumph of Dionysus," 4thC CE, Museum of Setif, Algeria (Photo taken by Sophie Hay and used with expressed permission of the photographer).

Dr. Reeber earned her BA in Classics and Linguistics from UNC-Chapel Hill in 2004 and her PhD in Classics from the University of Wisconsin in 2011. Her research interests include Augustan elegy, archaic and Hellenistic poetry, and ancient biography. She has taught Latin and Greek classes at all levels at Arkansas since 2012.

Dr. Reeber earned her BA in Classics and Linguistics from UNC-Chapel Hill in 2004 and her PhD in Classics from the University of Wisconsin in 2011. Her research interests include Augustan elegy, archaic and Hellenistic poetry, and ancient biography. She has taught Latin and Greek classes at all levels at Arkansas since 2012.

07/01/2022
Blog: Ancient Worlds, Modern Communities: Contemporary Responses to Greek Myth and Tragedy through Drama, Film, and Visual Art
The Ancient Worlds, Modern Communities initiative (AnWoMoCo), launched by the SCS in 2019 as the Classics...
06/29/2022
Blog: “Deeply rooted in history”: Teaching abortion ancient and modern in a post-Roe v. Wade world
With weary hearts, we consider with you what Classics can do in the face of Dobbs v. Jackson Women’s Health...
06/27/2022
Blog: Teaching in a Time of Anti-Asian Violence: Reflections on Asian & Asian American Experiences in Classical Studies, Part 1
This two-part series reflects upon AAPI experiences in Classical Studies. Part 1 is catalyzed by the author’s...
06/25/2022
Blog: Roe v. Wade, the GOP, and echoes of Augustus: Reproducing fascism
I guess I should say “thank you.” Gratias vobis ago. Thank you to the Republican Party’s long game, a partisan...
06/20/2022
Blog: Paternalism and the “Good Slave” in the Speech for Phormion and the Legacies of Slavery
In a discussion of the concept of the “good slave” in her book Reconstructing the Slave: The Image of the Slave in...
END_OF_DOCUMENT_TOKEN_TO_BE_REPLACED