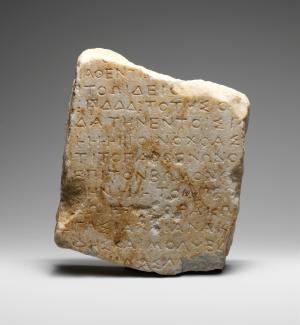 The Packard Humanities Institute’s Searchable Greek Inscriptions revolutionized the accessibility of ancient Greek epigraphic texts, first in CD-ROM format and then online since 2005. David Packard, Jr. initiated the project in the late 1980s as a collaboration between teams of scholars at Cornell University and The Ohio State University, and supported it financially through the Packard Humanities Institute (PHI). The original intent was to produce searchable texts of the well-over 200,000 inscriptions published in volumes like Inscriptiones Graecae (IG). The PHI editors did not aim to replace or fully re-edit the published editions of the texts, but did make corrections and standardize many inconsistencies. (On the early years of the project and its working methods, see Iversen 2007).

The online version replicates the original CD-ROMs, but has also expanded to include more texts from more recent publications. It covers a wide variety of corpora, journals, and other publications—including many areas not covered by IG, such as Egypt, Nubia, Cyrenaica, Asia Minor, and the Upper Danube. The PHI website describes the project as “a comprehensive database of all ancient Greek inscriptions, which is extraordinarily useful to an extraordinarily small number of expert epigraphers.” Experts do indeed cherish this collection. Yet, because it efficiently houses in one place copies of these scattered texts, and makes them available at no cost to the user, it has also brought Greek inscriptions to more scholars and students beyond the small number of specialists. It is notable also that databases like Pleiades make use of the PH reference number, a unique identifier found at the bottom right of each text on the site.

What makes PHI more than just another corpus is that it is searchable. Every string of Greek text is hot: simply double click to get search results. The site searches character strings, rather than indexed words, which is especially useful in the realm of fragmentary Greek inscriptions. Searches can cover the entire corpus, a region, or sometimes a single archaeological site. Search results present the text(s), the number of times the search item appears, and statistics by percentages. PHI—Searchable Greek Inscriptions may be simple in design, but it remains a mighty reference and search tool.

The site’s main page presents a list of the regions in which the inscriptions were discovered, generally following the order of coverage in IG. The texts themselves are quite up-to-date: references to Supplementum Epigraphicum Graecum (SEG) end at volume 58, published in 2012, and covering publications through 2008. Depending on the user’s purpose, PHI may not be a sufficient replacement for examining the text in print, since the versions of texts available on the site are not always identical to the hard copy, and there is no guide to indicate what changes should be expected. The differences are most obvious for old volumes of IG that featured alternative epigraphic notations that could be confusing today; the PHI project has updated those texts to the editorial style used throughout their whole site, namely, the Leiden Conventions. In addition, there are occasional issues with the appearance of complicated accent-letter combinations, such as the eta with a circumflex used in the Old Attic alphabet, which are consistent across operating systems and browsers. One should err on the side of caution and treat a PHI text as a unique publication, citing it by the PH reference number.

The presentation of the website has not changed radically since its launch, as can be seen in these screenshots from 2007, taken by the Dallas Theological Seminary. Recent Bootstrap framework additions feature an improved search bar and the ability to increase the size of the text on screen.

A navigation bar sits at the foot of the page featuring a search box with a button at its left for toggling between Greek and Latin characters. Buttons to the right of the search box allow users to select the region(s) to search, view search results in concordance form, search by bibliographic reference, or browse the bibliography.

Further search customization and help—including a list of search operators—is available via a hamburger icon at the far right of the navigation bar.

To find a specific text or group of texts, you can browse by region or by bibliographic reference. Individual records are organized by (sub-)region, publication, and inscription number, with the result that browsing by region requires quite a few clicks before you can view any text. Several pages display the lists of the texts’ numbers out of order, which can be confusing when trying to determine what is and isn’t included.

If you are searching for a specific inscription and know the inscription number, you can navigate to the list of references for any region, select the appropriate publication, and then input the number into a search bar that appears at the top of the list of numbered texts. A full list of the bibliographic references from which the texts have been drawn is included in the bibliography page, accessible through the “Browse” button in the navigation bar. That same button also offers the option to browse “by reference,” which leads to a search bar. As you type, options containing the typed letters begin to appear: typing just “cl,” for example, brings up every bibliographic entry in which those letters appear together, whether in the author, title, or abbreviation. This is a useful way to find an inscription referenced elsewhere, or to track down a bibliographic entry that appears internally on the PHI site itself.

Once you arrive at your inscription, there is little beyond its text.

In modern epigraphic notation, square brackets are used to indicate restored text that does not appear on the stone—clicking on the square brackets to the left of the text allows you to view the text with or without bracketed insertions. References to other editions of the text are often included; in the rare case that one of those editions is also available as a separate PHI entry, it appears as a link. The Claros Concordance of Greek Inscriptions can be used to determine whether the inscription is equivalent to one in a corpus or publication not listed here.

After performing a search, you can view the results in multiple forms. Clicking on the concordance button arranges the information in a list view, with the search term highlighted within the line in which it appears (unfortunately without the line number indicated).

When drawing conclusions from the search results, it is important to recall that they include words or letters that may be in square brackets or dotted (i.e., read with less than 100% certainty). Occasionally the same inscription appears more than once. For example, I.Eleusis 159 and SEG 34:122 are different editions of the same text, but can appear individually in the number of hits: a search of θορικι in Eleusis brings up “5 matches in 5 texts,” but there are really four matches in four texts. This kind of overlap is fairly rare, however, because PHI tends to use the most recent version of a text (e.g., the only IG I2 texts that appear on the site are those excluded from the updated IG I33). The statistics cannot be used uncritically, but they are a very useful tool to get a broad picture, especially for comparisons.

Rights: Users must agree to employ this material only for personal study and not to make copies, except for personal use.

Laura Gawlinski is Associate Professor of Classical Studies at Loyola University Chicago. Her research focuses on ancient Greek religion, particularly the management of sacred space and the intersection of dress and religious experience. She is also a field supervisor at the Athenian Agora excavations. lgawlinski@luc.edu