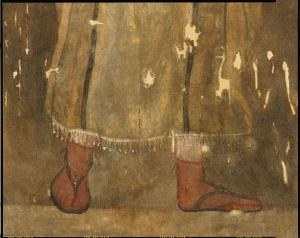 “To walk a mile in someone else’s shoes” is a cliché saying, but perspective-taking – or the act of perceiving a situation or understanding a concept from another person’s point of view – is undoubtedly an important part of building one’s capacity for empathy. In outreach and community engagement, perspective-taking is an essential tool for creating programs that are responsive and attentive to the needs, values, and history of one’s community partner. Perspective-taking can play a different, but equally important role for Classicists engaged in community outreach: if we can create programs that allow participants to experience and see the world as the Greeks and Romans did, we can inspire a passion for the ancient Mediterranean world among people who may find traditional scholarly lectures and publications inaccessible or boring.

The SCS Classics Everywhere initiative has supported four outreach projects that allow community members to put on the eyes, ears, hands, and minds of the Greeks and Romans in exciting experiential learning programs. One such project, “After the Antique: Mithras Now” was spearheaded by Susan Bachelder of the Housatonic Valley Art League (HVAL), and brought Anthony Baus, a contemporary artist who specializes in painting in the antique style and is an instructor at the Grand Central Atelier in New York City, to give a lecture and workshop at the Sheffield Library in Sheffield, MA.  On Friday, August 9 at 7pm, Baus spoke on the inspiration classical studies brings to his art, which is influenced by his research into the cult of Mithras conducted in Rome. On the following day, Saturday, August 10 from 10am-5pm, Baus led a drawing workshop for adults, which aims to expand one’s portfolio of techniques by exercising a realist approach to perspective.

Bachelder studies late antiquity and is also interested in contemporary paintings that represent the ancient past. An artist herself, she believes that an artist’s work should be informed by a deep knowledge of the primary sources that inspire their art. She studied classical perspective in painting with Baus at the Grand Central Atelier in New York City, an experience which inspired her to bring him to the Berkshires. While the area is culturally rich, with institutions such as Tanglewood, Jacob’s Pillow, and MASS MoCA, there is not much art that is classically-inspired. Baus’ research and training allows him to discuss where the Classics intersect with fine art and how the classical world can inspire the artist in their own contemporary practice. According to Bachelder, “it is important to have Baus discuss how you can draw the ancient ruins accurately – how to bring the texts into alignment with the arts and the arts into alignment with classical studies.” 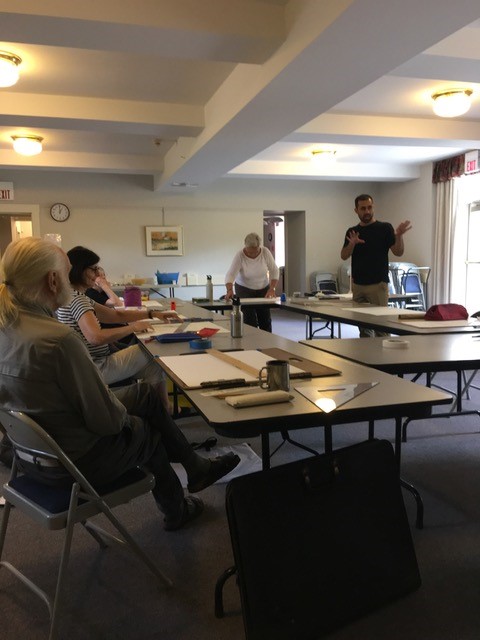 Figure 1: Anthony Baus and participants during the workshop in classical perspective on August 10. Photo by Susan Bachelder.

While Baus’ lecture and workshop encouraged adults in the Berkshires to see and draw as the ancients did, in the Ohio Valley, the Franciscan University of Steubenville’s Department of Classics invited children to walk in the sandals of Roman engineers in their “Ancients in the Parks” series. Sarah Wear led this program, which ran in June and July at parks in Weirton, WV, Follansbee, WV, Toronto, OH, and Steubenville, OH. Through the use of models, toys, and coloring pages, children learned about aqueducts, pontoon bridges, arches, domes, and catapults.

Wear has been very intentional about choosing her outreach sites to have the greatest impact with underserved populations who haven’t had any exposure to the ancient world. Weirton, Follansbee, Toronto, and Steubenville have school districts with low literacy rates, and only one regional high school, Steubenville Ohio’s Catholic Central High School, has a Latin program—this program, moreover, is in its first year. Every Wednesday, Wear and her students set up tables at parks with public pools attached, to encourage children to spend the day playing and learning about the ancient world. Several of these parks offer summer lunch programs for children who do not have access to lunches otherwise, after the school lunch programs disband for the summer.

Wear works on late antique metaphysics, but since she teaches at a small college, she teaches a variety of courses. She includes a lot of material culture in her courses and believes in hands-on activities. For “Ancients in the Parks”, Wear and her students have selected a variety of activities to appeal to children of different ages. Younger kids were shown how to make arches and bridges with blocks. Older children learned about Roman concrete and road construction; they built mini aqueducts and catapults; they used sugar cubes to design their own colosseum; and they explored Roman domestic architecture by building models of Roman houses and making their own mosaic designs. Wear’s hope is that children will see and experience the ways that Roman engineering is still applicable to modern life. 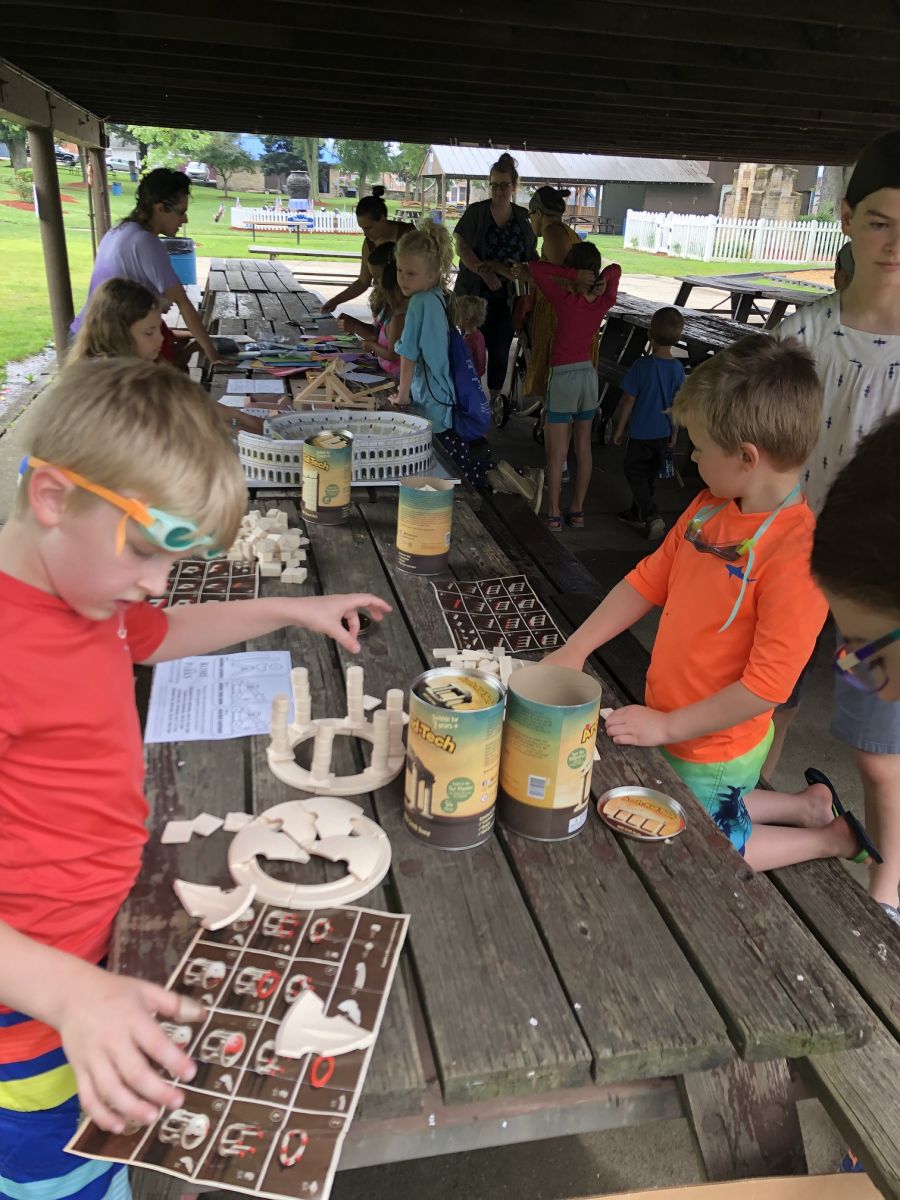 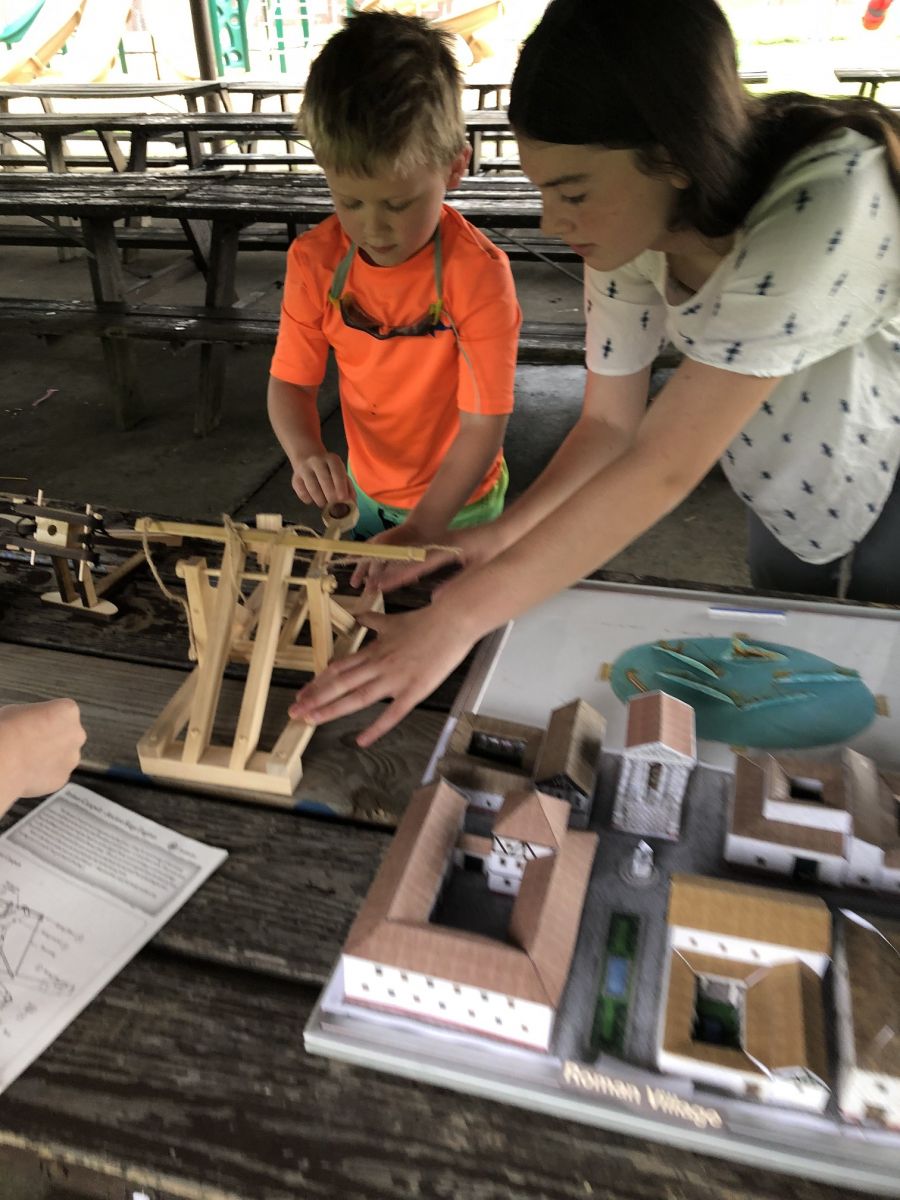 Figures 2-3: Children participating in “Ancients in the Parks”. Photo by Sarah Wear.

Like Sarah Wear, Carly Maris is taking advantage of the summer break to create hands-on programming for children and their families. Maris is the Project Leader for “Voices of Ancient Palmyra”, which began as a website and social media gallery that asks the public to recreate and reimagine artistically six Palmyrene inscriptions. “Voices” has now become a temporary gallery exhibition at the Robert and Frances Fullerton Museum of Art (RAFFMA) at California State University-San Bernardino. The exhibition features work by professional artists, working in multiple media and styles, who explore how we can remember and engage with the ancient past in a post-materiality state, i.e. when the objects are gone or inaccessible. Funding from the Classics Everywhere initiative has supported Maris in creating an immersive experience for children (and parents) that involves teaching the children about what life was like in Roman Palmyra.

Palmyra is not a household name, which certainly poses a challenge for drawing the public to an outreach event, but Maris has come up with a creative work-around: “One of the most challenging things so far was figuring out how to advertise the event. The public does not know about Palmyra, generally, and so we decided to frame it as ‘traveling back in time to a mysterious oasis.’” To stoke the children’s imaginations, Maris and her team decorated the exhibit space as an oasis. Activities included learning about ancient languages (Latin, Greek, Aramaic), ancient styles of dress, and even a banquet (modeled loosely after Palmyrene banquets). The families had time to explore the “Voices of Ancient Palmyra” exhibit as well. Maris hopes that “Time Tours” will be the first in a line of similar events to feature chances for children and families to learn about the ancient world. To Maris, “It's important, I think, to show the public how diverse and multicultural the ancient world was, and Palmyra is the perfect site to do just that as it had people from multiple ethnic and religious backgrounds living together.” 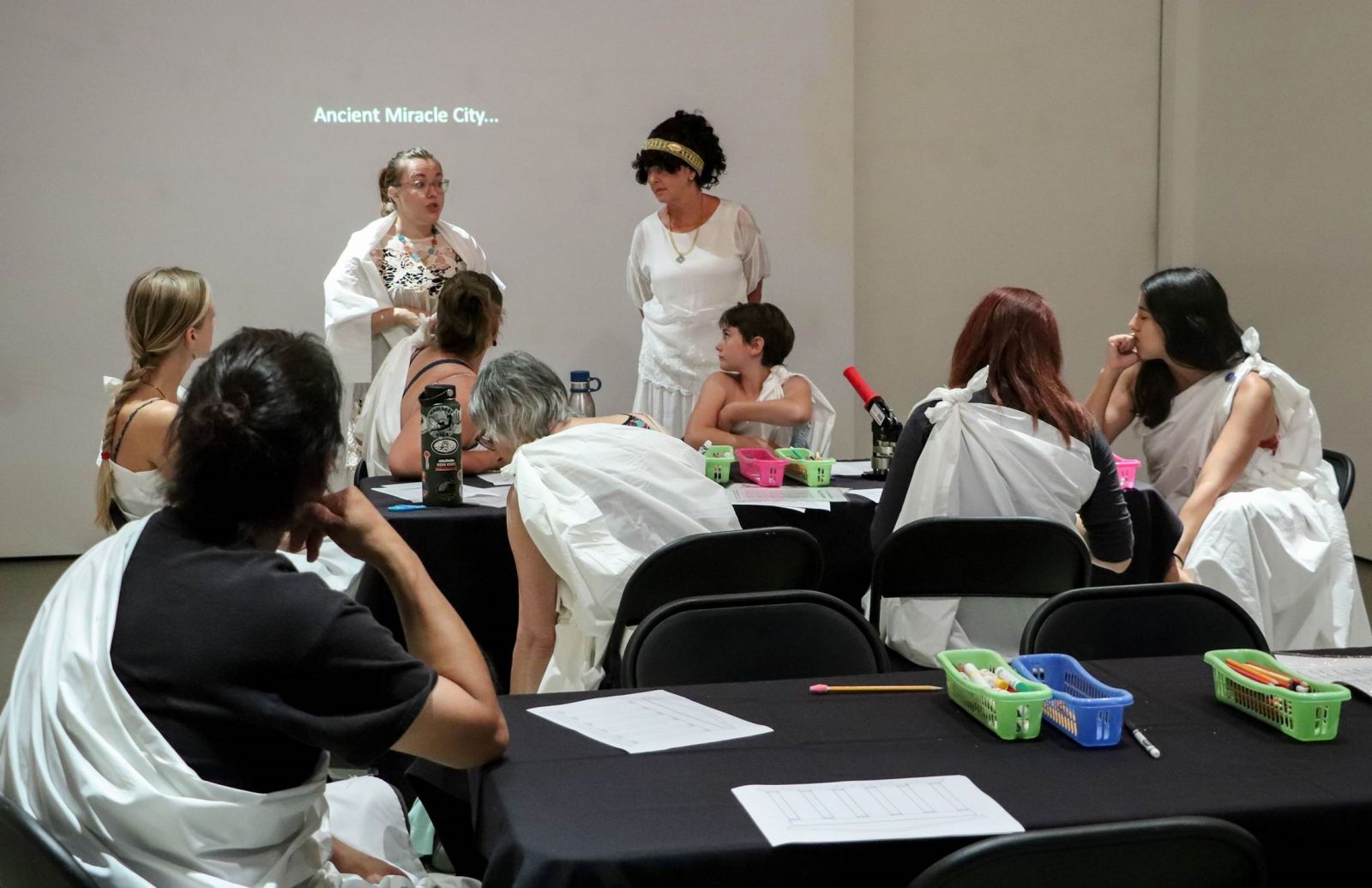 Figure 4: Carly Maris, Eva Kirsh, director of RAFFMA, and the time travelers during the activities at the Robert and Frances Fullerton Museum of Art.

The above projects rely on shared visual and tactile experiences to help modern audiences connect with the ancient world. Diane Arnson Svarlien, an independent scholar who works on translations of Euripides, encourages children to practice the ancient art of listening as she reads to them once a week at the free Twenty-first Century after-school program at William Wells Brown Elementary (WWB), a public school in Lexington, Kentucky. Arnson Svarlien’s goal is to promote literacy and listening skills through emphasizing the pleasure of reading. As she says, “Kids who don't read well tend to think of reading as work, punishment, or simply a thing that they’re incapable of; my agenda in reading to them is to encourage them to think of books as a source of pleasure and entertainment.” To that end, Svarlien reads to the children in small groups or one-on-one, and invites them – but never requires them – to read to her. Each child who reads with her gets a book of their own choosing to take home and keep.

There is high demand – but few resources – for Arnson Svarlien’s reading program at WWB. WWB has the highest percentage in the district of free and reduced-price lunch recipients (93%), and faces significant challenges in student performance on standardized tests. A love of reading provides a strong foundation for student success, and Arnson Svarlien has found an enthusiastic audience for read-aloud among the kids at WWB. Until she received a grant from the Classics Everywhere initiative, Arnson Svarlien’s work was fully self-funded. Her reading list includes both Classics and non-Classics books: a self-described “Come for Pete the Cat, Mo Willems, and Maurice Sendak, stay for Atalanta’s Race” approach, which she sees as a way “to introduce kids—in a demographic not traditionally drawn to Classics—to the ancient world.” With the support from the SCS, Arnson Svarlien has committed to purchase at least 75% directly Classics-related books, and to expand her familiarity with Classics titles suitable for grades K-5. 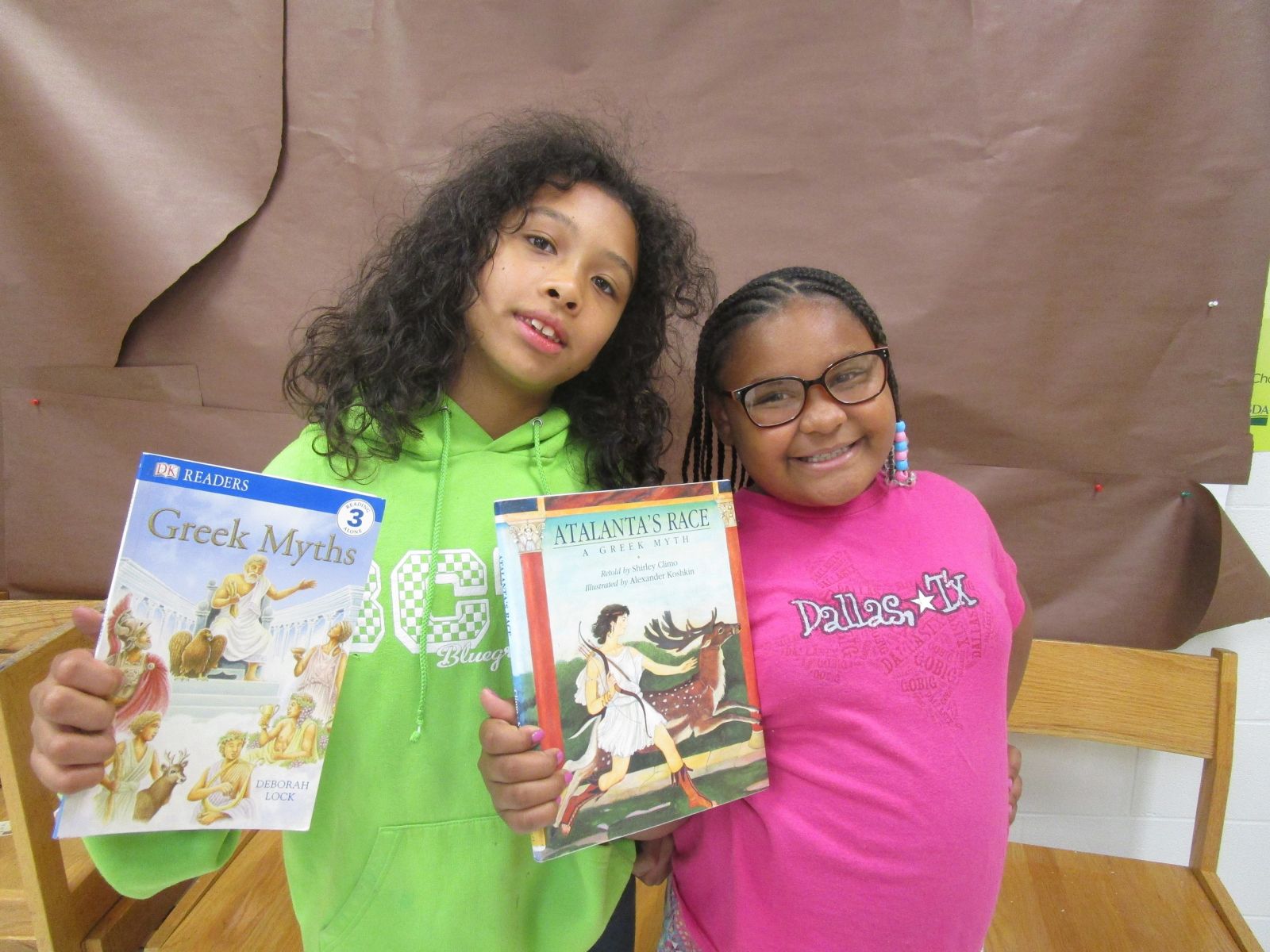 Figure 5: WWB elementary school children with some of their favorite books. Photo by Diane Arnson Svarlien.

Arnson Svarlien believes that her work “is addressing a social emergency. Classics cannot thrive in a culture where literacy itself is in crisis, and these kids are in the deep end of such a crisis. My goal in reading with them is to inspire a love of reading which will enable them to develop their skills, and to introduce them to great storytelling from the Classical world.” But as one individual, with limited time and funds, she can only do so much. To this end, the SCS invites its members to support Arnson Svarlien’s mission in the following ways:

Mallory Monaco Caterine is a Professor of Practice in the Department of Classical Studies at Tulane University, where she teaches Latin and Greek language, Greek civilization, and ancient leadership. She runs an Aequora site in New Orleans as part of a Latin service-learning curriculum. She is also a founding member of Kallion, an organization devoted to the improvement of leaders and leadership through humanistic inquiry. Currently, she is the chair of the SCS Committee on Classics in the Community.

04/13/2022
Blog: Two Years Later: “Classics” after Coronavirus?
In an April 2020 post for Eidolon, I gathered predictions on “classics after coronavirus.” Two years later, it’s...
04/08/2022
Blog: Ancient Worlds, Modern Communities: Increasing Accessibility for the Study of the Ancient World
The Ancient Worlds, Modern Communities initiative (AnWoMoCo), launched by the SCS in 2019 as the Classics...
03/21/2022
Blog: I Love You, I Hate You: A Student’s Perspective on Learning Latin
I have always enjoyed Latin class because it felt like a puzzle, much like math. Find the verb, find the noun that...
03/18/2022
Blog: Power to Punish and Authority to Forgive: Imperial State and Imprisonment in 4th-Century Antioch
Research ideas often develop out of chance encounters or unplanned circumstances. My dissertation project was born...
03/14/2022
Blog: Sampling Epic in Kendrick Lamar’s “Mortal Man”
Because it’s spirits, we ain’t even really rappin’ We just letting our dead homies tell stories for us....
END_OF_DOCUMENT_TOKEN_TO_BE_REPLACED