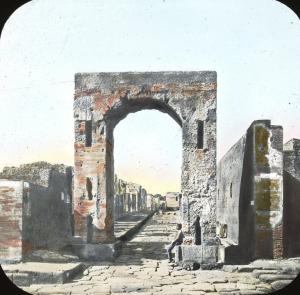 Strolling through the ruins of Pompeii is an evocative and multi-sensory experience that has inspired generations of visitors to imagine what life was like in a small Roman town. Unfortunately, most American students cannot afford to visit in person, and attempting to recreate that transformative experience in the classroom is challenging. The recent emergence of Virtual Reality (VR) headsets as serious platforms for scientific visualization, however, is transforming our ability to develop experiential learning environments for our students.
In spring 2017, my colleague David Fredrick and I developed two experimental courses, titled “Virtual Reality Pompeii: Street Life and Urban Culture,” designed to study a street in Pompeii with an eye toward the intersection of commercial and domestic activity and public and private space. Using virtual technology to recreate those spaces, students produced 3-D models of a section of the via dell’Abbondanza (Regio IX and Regio I) for use with VR headsets. Focusing on the streetscape, as opposed to civic spaces like the forum, provides a more holistic approach to urban experience in a Roman town. We plan to use the student-designed models both to enhance classroom teaching and as a tool for advancing research into spatial cognition in Roman towns.

Screenshot of the Unity Game Engine.
The first course was a semester-long honors colloquium, the second a two-week research practicum on site in Pompeii. Each was designed to provide students with an overview of Pompeian history and society, while also introducing concepts and methodologies found in contemporary spatial analysis and urban studies. Students in both courses learned the basic pipeline for creating 3-D visualizations in order to produce a model in VR.
The honors colloquium involved a series of workshops taught through the Tesseract Center for Immersive Environments and Game Design. Students learned basic modeling skills using ProBuilder, a tool for building and editing geometry in the free, cross-platform game engine Unity. Students worked in groups of four, constructing an interactive 3-D model of one block along the via dell’Abbondanza. Visualizations had to be based on available textual, material, and visual evidence from publications and online resources. Models also had to be didactic, teaching the user something about Pompeian society. One group’s model focused on municipal politics and Latin epigraphy. Through the VR headset, users were directed to explore the street façade to locate derogatory political programmata (composed in Latin by the students), which defamed the magistrate M. Epidius Rufus, whose house stood in the group’s section of the via (IX.1.20). In another model, users could visit an ironsmith’s shop (I.6.12), and learn about metalsmithing by virtually participating in the production of an object.
Immediately following the colloquium, we led a two-week research practicum on site in Pompeii. Although there were two crossovers, the majority of students were new, offering fresh perspectives with which to refine the digital models the colloquium had produced.

Students taking pictures for photogrammetry.
After two days of on-site orientation, students divided into groups of four. The groups were responsible for capturing photos for photogrammetry of the street facades, features (fountains, shrines, etc.), and the interior spaces of structures fronting their section of the via dell’Abbondanza using their cell phone cameras.

Photo model of a section of the via dell’Abbondanza in Agisoft.
After learning how to process their photos in Agisoft Photoscan, students produced their own 3-D photo models of the street, which will be used to refine and texture the models previously built in Unity.
The “Virtual Reality Pompeii” experiment suggests that VR technology can promote innovative teaching and broader participation in Classics. The courses had no prerequisites, which allowed us to recruit a wide diversity of students new to classical studies. The students varied both in their exposure to Roman history and culture (approximately half of our students were from STEM fields), as well as computer coding and 3-D skills. We addressed this by requiring a number of foundational readings, strategically forming groups to include students with strengths both in classics and computing. The difference in skills leveled the playing field: no one was an expert in all the different concepts we were introducing—not even the instructors—and this encouraged a collaborative learning environment. In building a visualization of Pompeii based in the historical and archaeological record, students had to engage with interdisciplinary source materials, and learned a great deal about Roman society in the process. The VR technology also required students to critically apply concepts of spatial cognition in the design of their 3-D models, offering a deeper understanding of how spatio-visual cues in the streetscape impact human behavior. Students also gained practical skills in Unity and Agisoft, which are widely applicable in a variety of professions. Recreating life in ancient Pompeii with 100% accuracy is impossible, but VR technology encourages our students to take an active role in their learning experience by creating their own experiential learning tool, which can be used in future courses to help other students better understand urban life in the ancient Roman world.
(Header Image: "Gate, Pompeii, Italy". Lantern slide 3.25x4in, 3.25 x 4 in. Brooklyn Museum, Goodyear Archival Collection. [Photo: Brooklyn Museum, S03i3144l01.jpg]. Public Domain.)
Blog tags
digital classics
digital humanities
pedagogy

Rhodora G. Vennarucci is Assistant Professor of Classics and Art History at the University of Arkansas. Her research focuses on marketing history, innovation in Roman crafts production, and the use of interactive 3D visualization in Virtual Reality to investigate urban experience in ancient Rome. Contact her at rhodorav@uark.edu

04/13/2022
Blog: Two Years Later: “Classics” after Coronavirus?
In an April 2020 post for Eidolon, I gathered predictions on “classics after coronavirus.” Two years later, it’s...
04/08/2022
Blog: Ancient Worlds, Modern Communities: Increasing Accessibility for the Study of the Ancient World
The Ancient Worlds, Modern Communities initiative (AnWoMoCo), launched by the SCS in 2019 as the Classics...
03/21/2022
Blog: I Love You, I Hate You: A Student’s Perspective on Learning Latin
I have always enjoyed Latin class because it felt like a puzzle, much like math. Find the verb, find the noun that...
03/18/2022
Blog: Power to Punish and Authority to Forgive: Imperial State and Imprisonment in 4th-Century Antioch
Research ideas often develop out of chance encounters or unplanned circumstances. My dissertation project was born...
03/14/2022
Blog: Sampling Epic in Kendrick Lamar’s “Mortal Man”
Because it’s spirits, we ain’t even really rappin’ We just letting our dead homies tell stories for us....
END_OF_DOCUMENT_TOKEN_TO_BE_REPLACED