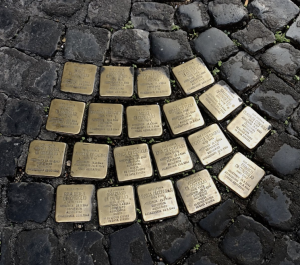 Official commemoration of the raid within the city of Rome has occurred since 1944 on an infrequent basis, but constant physical markers now remain in the form of small, brass, inscribed plaques often cleaned, buffed, and reread annually on October 16th. These Stolpersteine (the singular is Stolperstein), the German word for “stumbling stones” were placed all over Europe by German artist and sculptor Gunter Demnig. To date, Demnig has inlaid 60,000 stumbling stones in 22 countries in order to commemorate and remind the modern world of the millions of victims of the Holocaust. As the Berlin portion of the project notes, they commerate all persons persecuted by the Nazis from 1933-1945:

Stolpersteine are being realized for Jews, Sinti and Roma, people from the political or religious resistance, victims of the "euthanasia" murders, [LGTBQ individuals], Jehovahs Witnesses and for people who were persecuted for being declared to be „asocial“.

In interviews, Demnig states he began the installation project in 1992 in Cologne. When asked about its purpose, he often quotes the Talmud: "a person is not forgotten until his or her name is forgotten."[1]

Mark Letteney, a Visiting Scholar at Sapienza Università di Roma and a Fellow of the American Academy in Rome, was able to attend the day of remembrance this year. The German embassy sponsored the Associazione Arte in Memoria (under the direction of Adachiara Zevi). As Letteney notes, Zevi organized groups from around the city and from the American Academy in Rome to polish every one of the 288 Stolpersteine in Rome. Letteney remarked,

Typically only the memorials in Il Ghetto are polished every year. The stones in the picture below commemorate the murder of the Terracina family. As you probably know, Gunter Demnig installs all of the memorials himself, and he chooses the organization of the stones to signify something about the family. Usually it is generations, as you can see is the case here — it looks like Leone was the patriarch, who had two sons Amadeo and Giovanni. Giovanni married Lidia Ascoli, and they had three children: Anna, Leo, and Cesare.

As classicists or epigraphers, we often focus on the active engagement with ancient inscriptions throughout the city of Rome, but these Stolpersteine are a powerful part of the overall inscribed landscapes within the urbs remembering a significant loss within a Jewish community that had existed in Rome since the second century BCE.

During his time living in Rome as a fellow at the AAR, these small commemorations had a profound impact on Letteney. He described the experience of encountering them in the city:

It places history on the landscape in a visceral and unmistakable way. And the “history” that it evokes is not a disembodied narrative of suffering, but a physical reminder of the lives of individual people with names, families, and homes. It does something fundamentally different than, for instance, the holocaust memorial inscription at the Portico of Octavia, which invites a passerby to be just that — someone who takes a moment to remember, and then to move on with her day. You can’t stop at Stolpersteine, not really. Typically they are on crowded city streets, and the moment in mid-day when they are most reflective is the moment when the streets that they line are most busy. For anyone willing to pay attention, they make remembrance part of the day, and not a moment outside of it.

Epigraphers working in Rome are used to encountering Greek or Latin epitaphs along the Via Appia or in the Vatican Museums and pausing to read the inscriptions that lament the loss of a loved one. However, the Stolpersteine are a vivid and much more recent reminder that inscribed memories––and our active engagement with them––still hold potency today. Whether it is taking a rubbing at the Vietnam War Memorial in D.C. or crouching to clean a small brass plaque as you ambulate through the ancient city in search of gelato, we are still active agents in perpetuating the memory of the dead. On his epitaph, the epic poet Ennius stated he did not wish visitors to weep for him: “Why? Alive, I fly, through the mouths of men.”[2] Stolpersteine are just one way that the lives of the Jewish Romans lost in the Holocaust can continue to fly, to live, and to be rememembered in the present.

Header Image: Stolpersteine on the Via della Madonna dei Monti in Rome (Photo by Agnes Crawford and used by express permission of the author).

Rebecca Clifford, Commemorating the Holocaust: The Dilemmas of Remembrance in France and Italy (Oxford, 2013).

Gianni Guastella, Fama and Its Personifications in Art and Literature from Ancient Rome to the Middle Ages (Oxford, 2017).

[1] This appears to in actuality be a modification of Megillah 3:2.

09/21/2020
Blog: How Might We Gamify Ancient Greek?
In last year’s introductory Greek class, I watched a student rejoice when asked to give a (partial) synopsis of...
09/07/2020
Blog: The Grammar of our Discontent: Ovid, Wishes, and the Virtual Term
Unattainable wishes for the present or past may be entirely reasonable. – Smyth’s Greek Grammar, “Wishes” §...
08/31/2020
Blog: Classics Everywhere: Promoting a Passion for the Ancient World in the Midst of a Pandemic
The Classics Everywhere initiative, launched by the SCS in 2019, supports projects that seek to engage...
08/17/2020
Blog: In Memoriam: Remembering Vergil Scholar William Robert Nethercut
William Robert Nethercut, 84, passed away on August 14, 2020. He was born to the late Robert and Constance...
07/31/2020
Review: The Duolingo Latin Course
After many years of offering free language courses to students of popular modern languages such as French, Spanish...
END_OF_DOCUMENT_TOKEN_TO_BE_REPLACED