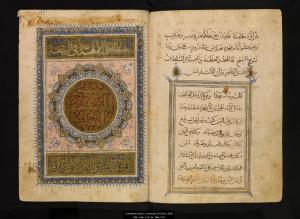 Both glossaries are targeted at specialists interested in the techniques of the contributors to the Greco/Syriac-Arabic and Arabic-Latin translation movements, which saw Christian, Jews, Muslims, and pagans collaborate in centers of elite patronage such as Baghdad and Toledo. Gloss-ga is more explicit in communicating its intellectual agenda, and therefore helps to make sense of al-gloss’ vague statement that it hopes to improve “our understanding of the Arabic influence in Europe, especially with respect to scientific vocabularies, and to provide a lexical tool for the understanding of Arabic and Latin scientific texts.” In light of gloss-ga’s conception of its impact, “influence” appears to mean how Arabic-Latin translators shaped contemporary scientific discourse through their creation of a Latin vocabulary to capture Arabic technical terms and how this new terminology affected the development of post-classical Latin itself. This “lexical tool” has the potential to aid in the identification of hallmarks of individual translators and can serve as a reference for editors of Greek or Arabic works, the Arabic translations of Greek works, and the Latin translations of Arabic works or translations.

Although I am nit-picking about the lack of clarity of al-gloss’ mission statement, my purpose in so doing is to unpack for a generalist reader the importance of its contribution and the painstaking work behind it. The project’s use of grammatical categories such as the elative (comparative and superlative grades) to describe certain lexemes suggests that they did not envision a user without some background in Semitic linguistics. Al-gloss is, on the other hand, more accessible than gloss-ga in that it translates into English each Arabic lexeme, instead of linking the entry to the definition of the term in Perseus’ online lexica, when available. Al-gloss’ decision to translate seems to be motivated by the limitation of standard Arabic lexica, which prioritize the general meaning of words and sometimes neglect the senses present in the project’s sources.

Neither al-gloss nor gloss-ga are complete. The Latin-Arabic dictionary of the former covers the letters A to C and parts of D; the site also has a searchable Arabic-Latin glossary that is being generated as the Latin-Arabic version is completed. Al-gloss did not have the head start of gloss-ga, whose Greek-Arabic lexicon has been in preparation since 1980 and is based on a corpus of around 80,000 index cards containing lexemes drawn from bilingual glossaries of modern printed editions – in some cases, the team of gloss-ga compiled the glossary themselves from manuscripts. Al-gloss takes a similar approach, for it derives from the bilingual glossaries of modern printed editions of forty-two sources by twenty different Greek and Arabic writers working in disciplines such as medicine, optics, and astronomy. The site includes a comprehensive list of its Arabic-Latin sources with information about the translator (if known) that is arranged chronologically and geographically. 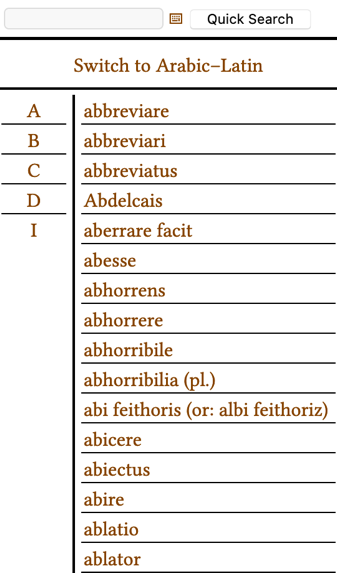 Figure 1: list of Latin words at the left of the screen can toggle to list Arabic words in transliteration 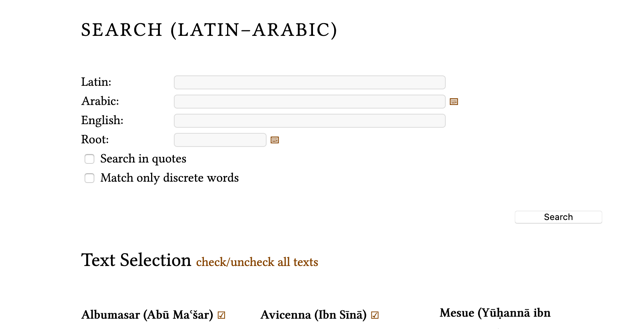 There are three ways to search al-gloss: (1) select the Latin or Arabic word from the left sidebar; (2) perform a ‘quick search,’ which involves entering a Latin or Arabic term, to find all occurrences in the Latin lemmata and Arabic expression; or (3) employ the search function, which can find English definitions, accommodate more complex searches consisting of up to four terms, and allows the user to restrict the search to certain texts and authors (but not translators). For users without an Arabic keyboard layout or hotkey shortcut, the site provides an on-screen keyboard to type Arabic script or transliteration.

Figure. 3: lemmata can be viewed in shorter or expanded versions

The lemmata themselves are easy to read and more fulsome than gloss-ga’s. Users have the option to view either a shortened or full-length version of the lemma; the former gives the lexeme, root, part of speech, English translation, a short example in which the lexeme appears, and sometimes the frequency of its occurrence in the reference, whereas the latter adds at most two quotations.

The Arabic counterparts to the Latin lemmata are arranged in descending order of frequency. None of the Latin and Arabic examples are translated into English. While time and spatial constraints probably factored into this editorial choice, the omission implies that the Latin and Arabic texts are uniformly equivalent. For example, the Latin quotation from the astronomer/astrologer Albumasar in the first entry on the lexeme abbreviare (1.1 iqtaṣara) is more expansive than the Arabic: the Latin translator has transliterated an Arabic technical term (zīǧāt; aziget; ‘astronomical tables’) and adds a gloss to clarify it. These differences do not affect the lexeme under study, but, for those without knowledge of both Arabic and Latin, the lemmata seem to obscure the translator’s adaptation of their source.

To reiterate, these criticisms are chiefly ideological, springing from the call of recent translation theory to make visible the translator’s presence, and do not detract from the high quality of the glossary. The project is still in its early stages, and the site’s solicitation of public feedback on the lemmata will only help to improve the final outcome.

Aileen Das is Assistant Professor of Classical Studies at the University of Michigan. Her Interests include: Greco-Roman and Islamicate medicine and philosophy; Galen and Galenism, the Second Sophistic, Greco-Arabic translation movement, epitomatory literature, pre-modern and modern concepts of time. As an intellectual historian with training in Classics, she is interested in how Greco-Roman and medieval Islamicate authors articulate categories of knowledge such as ‘medicine’, ‘philosophy’, and ‘science’. My current research examines the concept of disciplinarity, especially the ways in which boundaries are drawn between disciplines in contests for epistemic authority. She is currently completing a monograph, Galen and the Arabic Reception of Plato’s Timaeus (Cambridge University Press, Fall 2020), that looks at the polemical use of Plato’s cosmological dialogue by the Greek doctor Galen of Pergamum (d. c. 217) to contest philosophy’s exclusive right to define, describe, and explain the different domains of reality. I argue that, in so doing, Galen sets out to establish medicine as a reliable authority on not only the body but also the soul and the wider cosmos.

07/01/2022
Blog: Ancient Worlds, Modern Communities: Contemporary Responses to Greek Myth and Tragedy through Drama, Film, and Visual Art
The Ancient Worlds, Modern Communities initiative (AnWoMoCo), launched by the SCS in 2019 as the Classics...
06/29/2022
Blog: “Deeply rooted in history”: Teaching abortion ancient and modern in a post-Roe v. Wade world
With weary hearts, we consider with you what Classics can do in the face of Dobbs v. Jackson Women’s Health...
06/27/2022
Blog: Teaching in a Time of Anti-Asian Violence: Reflections on Asian & Asian American Experiences in Classical Studies, Part 1
This two-part series reflects upon AAPI experiences in Classical Studies. Part 1 is catalyzed by the author’s...
06/25/2022
Blog: Roe v. Wade, the GOP, and echoes of Augustus: Reproducing fascism
I guess I should say “thank you.” Gratias vobis ago. Thank you to the Republican Party’s long game, a partisan...
06/20/2022
Blog: Paternalism and the “Good Slave” in the Speech for Phormion and the Legacies of Slavery
In a discussion of the concept of the “good slave” in her book Reconstructing the Slave: The Image of the Slave in...
END_OF_DOCUMENT_TOKEN_TO_BE_REPLACED