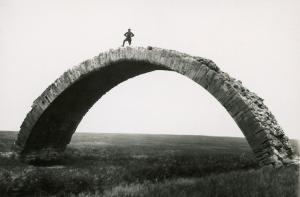 The Bridge, a digital humanities initiative out of Haverford College, allows users to generate customized vocabulary lists in both Greek and Latin. Bret Mulligan and a team of dedicated students have done an admirable job of adding texts to their database and are responsive to requests from users (both students and instructors). An accompanying blog helpfully documents the different updates as they are released, as well as a list of requested features, so users can get a sense of what’s in the works for The Bridge. Development has been funded both by Haverford College as well as by a Mellon Digital Humanities Grant and a program grant from the Classical Association of the Atlantic States (CAAS). There have also been collaborators from Bryn Mawr College and Laboratoire d’Analyse Statistique des Langues Anciennes (LASLA) at the Université de Liège, making this a model of a collaborative digital project that can draw on funding and labor from a number of institutions to create an open resource that helps all teachers and students.

The functionality of The Bridge is impressive to the point of being overwhelming at first, though the interface is very accessible and there is a detailed user guide with video tutorials that will walk new users through how to use the different features. Users can generate custom vocabulary lists based on textbooks or texts, and the lists offer information such as a the first appearance of a word, the total number of occurrences of a word, part of speech, corpus rank, and a link to Logeion and, for Latin texts, to Forcellini. Users can also filter vocabulary by part of speech and choose either to include or exclude things like proper nouns.

One of the most exciting features of The Bridge is the flexibility of the lists. Users can generate vocabulary lists for multiple texts, including several popular textbooks. For example, I use Hansen and Quinn for my Beginning Greek class, and I wanted to trim down the vocabulary to a list of highest priority words. I was able to generate a list, export it to Excel, and filter by frequency. I later decided that I wanted to prioritize words based on the texts that my students were most likely to read in Greek prose (the texts we’ll be starting with in Intermediate Greek), so I generated a list of words that appear in Hansen and Quinn and Thucydides. There is also the option to limit searches to certain books, chapters, or portions of a work. 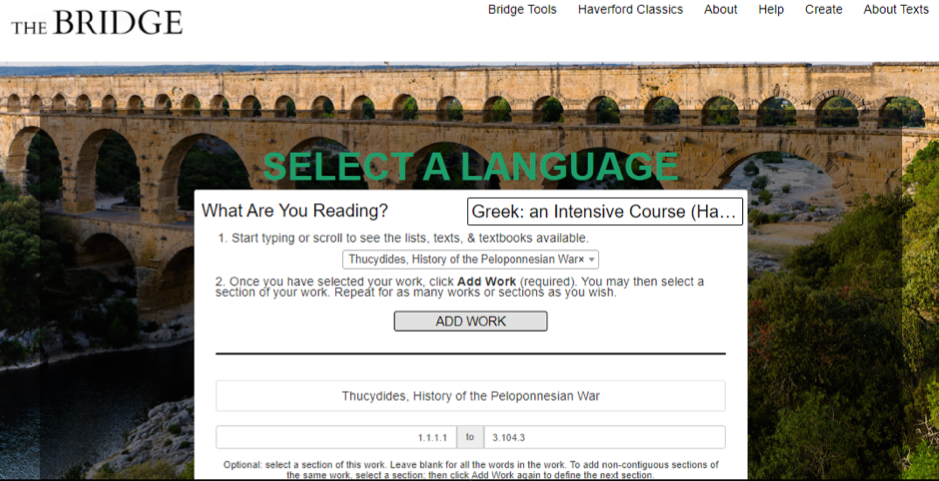 Figure 1: Search interface for a search identifying vocabulary that occurs in both Hansen and Quinn's Greek and Intensive Course (noted in the top right corner) and Thucydides' Peloponnesian War.

Once users have generated a list, they have the option to include additional data, like part of speech, links to other works, and the first appearance of the word (useful to instructors who want to sort a vocabulary list by the section in which a word is introduced).

Figure 2: Word list generated by the search set up above

The export process is not entirely intuitive on first use (see below), but once a word list has been exported into a spreadsheet, users can easily sort their word list by chapter or by part of speech, which is a very useful tool for designing targeted review. For my Beginning Greek students, I generated a list of the vocabulary words in Hansen and Quinn, filtered out words that do not occur with a certain frequency, and then shared the list with the class. This has been a useful tool for me when generating vocabulary quizzes, but it has also been useful for students who are creating flash cards. 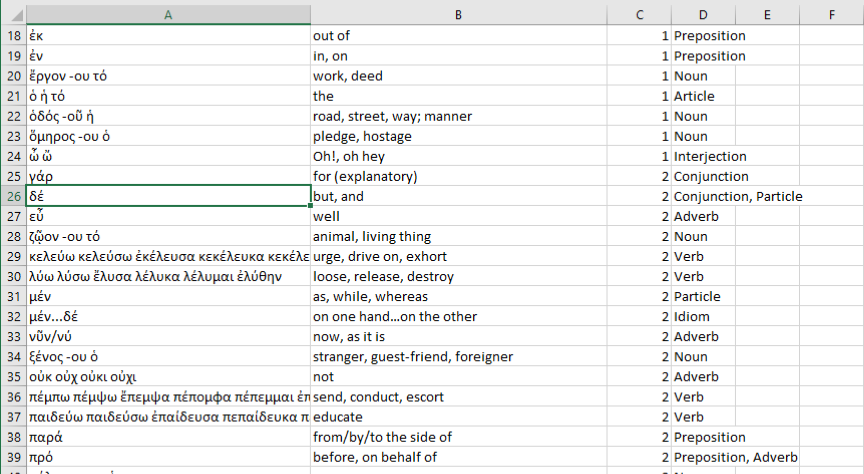 Another useful feature is the ability to exclude certain parts of speech from a word list. The ability to generate a list that excludes idioms or includes (for example) only verbs and nouns, may be useful for both students and instructors, depending on their objectives.

Figure 4: Word list with the menu shown in the right sidebar, showing the interface for including and excluding words.

One downside is the limited (though constantly increasing) selection of texts that is available through The Bridge. There are significantly more Latin texts available than Greek ones (approximately 165 Latin texts and 14 Greek ones) and a selection of commonly used textbooks (19 Latin textbooks and 7 Greek ones). One wonders if this has to do with the Latin script being easier to work with than the Greek script, which is made even more difficult with the complications around accentuation. Since there are already more online materials available for Latin language learners, as compared to Greek, it would be nice for the Greek offerings to eventually expand to match the list of Latin texts. In addition to the texts themselves, there are also several custom Greek and Latin lists available, such as the DCC Greek Core List and a 50 Most Important Verbs List. Students at Haverford are working to input texts in an ongoing process and additional texts should be available in the future. The project also seems very open to requests, both for texts and features, which makes it responsive and interested in accommodating the needs of the users.

As a Hellenist, I am most familiar with The Bridge’s Greek offerings, but there are some useful features that (as far as I am aware) are only available for certain Latin texts. One of my favorites is the ability to filter nouns and adjectives by declension and to filter verbs by conjugations. Also, for certain common texts, there is an option for a text-specific definition rather than a more generic or widely applicable definition, which can be a real benefit for students who may not yet be comfortable navigating through a full dictionary entry to find the relevant meaning.

The interface is fairly accessible, but it can take some time for users to learn how to navigate the different functions. In particular, it took me a few tries to generate and export a list of vocabulary that occurred in two different texts. Thankfully, there are many video tutorials available that can guide new users through the different tools. The videos have also been close-captioned manually, which makes them far more accessible than videos that rely on automatically generated captions (or omit closed captions entirely). While accessibility is something that all content creators should be thinking about, video content does not always include high quality captioning and I am glad to see that this project took the time to make their tutorial videos accessible. Although new users may find that there’s something of a learning curve when first trying to navigate The Bridge, once they have learned how to use the different functions, I am confident that they will be able to use the different tools comfortably. As one additional note, the export function only generates a .tsv file (Tab Separated Values) and many operating systems will not open these directly. However, they can easily be opened with Excel and Numbers (or other spreadsheet programs).

The most obvious comparanda for The Bridge are tools like the Thesaurus Linguae Graecae (TLG) and The Perseus Digital Library, all of which can generate vocabulary lists using a combination of machine learning combined with manual lemmatizing (or manual disambiguation) to fine-tune the data. In contrast to these tools, access to The Bridge is free (unlike the TLG) and has significantly more flexibility and data than what Perseus generates. As someone who was using these other online tools in the past to winnow down vocabulary lists, I have found The Bridge to be a significantly better option. I should note, however, that The Bridge is indebted to the work of the Perseus Digital Library, who has made their data publicly available through The Ancient Greek and Latin Dependency Treebank, which has in turn enabled the creation of a range of digital vocabulary tools. The Bridge is a recent addition to the ever-increasing suite of vocabulary tools that can draw on these data sets and publicly available lexica (LSJ and Lewis and Short, both available through a variety of free online tools) to help students learn better. While there are limitations to what The Bridge can do, this is a very powerful resource for instructors and students, and it belongs in everyone’s toolbox of digital classics resources.

RIGHTS (license restrictions imposed on access to a resource): The Bridge and its byproducts are licensed under a Creative Commons Attribution-NonCommercial-ShareAlike 4.0 International License.

Header Image: An ancient Roman bridge that spanned the Wadi al Murr near Mosul, Iraq, in the 1920s. Max von Oppenheim was submitted to National Geographic along with a manuscript for a story about his work at Tell Halaf, Syria, but was not published until NGS put it online in November 2009 (Image in the Public Domain).

Amy Pistone is Assistant Professor of Classical Civilizations at Gonzaga University. She earned her BA from the University of California, Berkeley in 2008 and her Ph.D. from the University of Michigan in 2017. Her specialties are Greek tragedy as well as feminist theory and inclusive pedagogy. She has also worked on symposiastic culture in the ancient world and modern uses of classics in pop culture (including Tolkien and fan fiction) and is very interested in ways that Greek and Roman culture interacts with our contemporary world. She is also a member of the Steering Committee for the Women's Classical Caucus and a co-chair of the Classics and Social Justice group.

04/13/2022
Blog: Two Years Later: “Classics” after Coronavirus?
In an April 2020 post for Eidolon, I gathered predictions on “classics after coronavirus.” Two years later, it’s...
04/08/2022
Blog: Ancient Worlds, Modern Communities: Increasing Accessibility for the Study of the Ancient World
The Ancient Worlds, Modern Communities initiative (AnWoMoCo), launched by the SCS in 2019 as the Classics...
03/21/2022
Blog: I Love You, I Hate You: A Student’s Perspective on Learning Latin
I have always enjoyed Latin class because it felt like a puzzle, much like math. Find the verb, find the noun that...
03/18/2022
Blog: Power to Punish and Authority to Forgive: Imperial State and Imprisonment in 4th-Century Antioch
Research ideas often develop out of chance encounters or unplanned circumstances. My dissertation project was born...
03/14/2022
Blog: Sampling Epic in Kendrick Lamar’s “Mortal Man”
Because it’s spirits, we ain’t even really rappin’ We just letting our dead homies tell stories for us....
END_OF_DOCUMENT_TOKEN_TO_BE_REPLACED