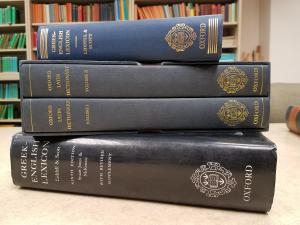 Logeion allows searches of a series of Greek and Latin dictionaries and classical reference works. It was developed beginning in 2011 at the University of Chicago by students Josh Goldenberg and Matt Shanahan under the direction of Professor Helma Dik, and regularly adds new features and resources. Inspired by the innovative Dictionnaire vivant de la langue française, also based at the University of Chicago, it began with a nucleus of several reference works originally digitized by Perseus. The current list includes some twenty distinct reference works (full list), including older comprehensive works in the public domain (LSJ, Lewis & Short); some important recent dictionaries (Diccionario Griego-Español Project, The Dictionary of Medieval Latin from British Sources); niche items like Luis Muñoz Delgado’s Léxico de magia y religión en los papiros mágicos griegos (2001); author-specific dictionaries for Homer, Pindar, and Vergil’s Aeneid; and reference works focused on material culture, such as the Princeton Encyclopedia of Classical Sites and Smith’s Dictionary of Greek and Roman Geography.

The mobile app (iOS only so far) and desktop interface (both free) present a simple search bar that helpfully auto-fills suggestions as you type, without requiring perfect entry of accents in Greek.

Can things be easier than this? Yes, they can. In order to look up a Greek word one can enter Latin characters, whereupon the application proposes Greek words as well. This saves time, since it is unnecessary to switch keyboards.

Language study and acquisition are part of the site’s purview. When a searched-for word occurs in any of a dozen commonly used Latin or Greek textbooks, the relevant chapter numbers appear at the right side of the page in the desktop version. The same sidebar tells which authors use a given word most frequently, and what words occur most commonly along with it.

For Latin, by default the first definitions shown come from the store of Perseus-derived “Short Definitions” and Lewis and Short, along with (when available), the Frieze-Dennison Aeneid dictionary. One also sees a few of the most common phrases containing the lemma. These are taken from the 1975 book Basiswoordenlijst Latijn [Basic Word List for Latin, 1975] and equipped with English translations. A single click (or touch on the app) reveals the entries in the Dictionary of Medieval Latin from British Sources, DuCange, etc., as available. For Greek the first offering is the full LSJ, with specialized entries for Homer, Pindar, and others a click or tap away.

“Examples from the Corpus” provides hits from an extensive lemmatized corpus of Greek and Latin prose.

New in September 2018 is an option for inverse alphabetical listing of nearby words, such that the user can find words of similar endings—something that might be particularly helpful in reconstructing truncated words in papyri, or in researching compound words.

The “examples from the corpus” come in very handy if one wants to illustrate the usage of a word or expression. But the passages provided by the dictionaries are not hyperlinked to text passages, as is the case in other applications like Thesaurus Linguae Graecae (see the SCS review) and Diogenes. Clicking on the author and work name in the “frequent authors” listing will lead you to a search in the allied database Perseus under PhiloLogic for the lemma, and through that one can get to the source texts. But this is obviously not what Logeion is meant for: in a simple and fast way Logeion provides a tool to search for lexicographical and other information coming from several reference works. It is important to note here that the dictionaries with full-text searches, such as LSJ and L&S, are updated more frequently than the dictionaries and texts on the Perseus under PhiloLogic site.

The mobile app, which I use on my iPad Pro, has a somewhat different appearance than the web version, and its appearance depends on the type of orientation used, landscape or portrait. In landscape orientation there is a window on the left-hand side of the screen with a search bar on top of it, and beneath that, a list with recent entries followed by nearby hits. The remaining part of the screen shows the clickable names of the four most obvious reference works and a hyperlink to the website where one can use all facilities of the application.

In portrait orientation the above-mentioned window does not appear but can be invoked by clicking on the hamburger menu at the top of the screen.

There are two major differences between the app and the website. The first is the number of reference works: some works, such as Du Cange’s Glossarium mediæ et infimæ latinitatis, are not available in the app due to their size, since all the reference works are stored on the tablet or phone. The second difference is the way Greek entries are entered: in the mobile app the usage of the (Modern) Greek keyboard is compulsory. It is, of course, possible to go to the website on a tablet for Greek searches using the Latin keyboard, but the website screen does not entirely fit the tablet’s. Still, the app has the advantage that it is mobile, and the device does not need to be connected to the internet.

After the description of the navigation in Logeion and the information it offers, the question arises how the information found in Logeion can be used and whom it benefits. Logeion makes use of open resources. This has the advantage that the application is free. But perhaps its disadvantage is the lack of important scholarly works that are up to date but that due to copyright and royalties are unlikely to be included in Logeion.

One of the advantages of digital data is that statistical information can be made available in a relatively simple way. In the case of Logeion this applies to frequencies and collocations. I just wonder how often these features of the application are used or how often Logeion is chosen because of them. Frequency research often is confined to a certain corpus and aimed at, e.g., the number of instances per 100 lines, which can be found easily using TLG. Collocations can be useful for translating into Greek or Latin or for teaching purposes, but do not contribute much to scholarly research.

Logeion is a great app for teachers and students alike. It provides information that is highly relevant to translations and some papers or projects. Scholars might like it too, especially for translating purposes because of its easy and handy interface. For extended scholarly research purposes Logeion is too limited.

The focus of Logeion is on its function as a search tool for reference works. If one does not need to frequently look up (hyperlinked) passages as well, Logeion is a fine tool which presents its information in a conveniently arranged way. It is noteworthy that not only English-language reference works (dictionaries) are used, but also works in other languages. This is certainly very attractive to non-English speakers, too.

I do not know what the future of Logeion will look like but considering its updates it is clear to me that the end of the promising progress of this project is not yet in sight. Therefore, I am looking forward to future developments, although I am curious about how the application will keep its convenient arrangement presenting information coming from more reference works.

Header Image: Dictionaries in the University of Iowa Classics Seminar Room, picture by Lindsay Vella and used by permission.

Willeon Slenders is an assistant professor of ancient and modern Greek at the Radboud university of Nijmegen who for many years now has combined his academic work with a teaching position in secondary education. His fields of interest are Greek philology with an emphasis on linguistics, Greek drama, especially satyr drama, and lyric.