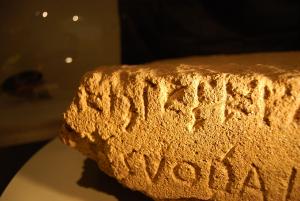 These collections remain pillars of the EAGLE “federation” of databases. Even from this brief account, their individual interest and complexity should be apparent—and also the complexity of aggregating them for a reliable unified search. Furthermore, several unique features are best accessed from within the individual databases—I direct attention only to the example of the geographic database provided since 2012 by the EDH.

The first EAGLE gateway went live in 2003. The site, like EDR, was hosted by la Sapienza, and its day-to-day administration fell largely to Italian scholars. The original website is still accessible, and it is worth a glance in order to appreciate the improvements in the new version. Of course in 2003 the editors could not have the prescience to adopt what have now become the standard markup conventions for presentation of papyri and inscriptions online, EpiDoc; the conventions had only begun to be developed from 2000. In the first manifestation of the site, too, the constituent databases are not well integrated by the search engine. A search in EAGLE redirects to the sites of the individual databases and opens results in four separate windows.

Ten years after the launch of the original EAGLE, the European Union, as part of its Europeana program, awarded a grant from 2013–2016 to develop a new EAGLE. The Europeana program was launched in 2008, with the purpose of establishing a digital platform for disseminating to the public the European cultural heritage. After receipt of this grant the original acronym for the project was retained, but the name changed: EAGLE became the European Network of Ancient Greek and Latin Epigraphy. The shared title suggests it is fundamentally a continuation and elaboration of the earlier project. The new portal continues to be administered by many of the same scholars who managed the first EAGLE, most notably Silvia Orlandi, and the project continues to be housed at la Sapienza.

Europeana support for the new EAGLE entailed an emphasis on public outreach, and the new website contains a large quantity of heterogeneous material. The divergent goals of the project impose a degree of architectural complexity on the site, which may cause some users an initial consternation—as it did me. I list the major popular components of the new EAGLE with a few telegraphic comments:

For scholars, the centerpiece of EAGLE is its search engine, and to use it intelligently users will have to investigate at the outset the constituent databases and their contents. EAGLE continues to aspire to general coverage of Greco-Roman epigraphy; the contents of the participating databases, however, are primarily Roman. The four original partners (EDH, EDR, EDB and EH) continue account for approximately 230,000 texts—half of the 455,415 inscriptions that can be searched through EAGLE. The new EAGLE has supplemented these with other, mostly smaller collections, listed and explained on the entry page for the search engine. Among these a large and notable database is the Epigraphik-Datenbank Clauss/Slaby. To drill down further into what is contained in each of these individual databases, one must investigate them one by one: EDH and EDR provide exemplary, clear, and detailed accounts of the state of their contents.

The EAGLE search engine allows for simple word or “and/or” proximity searches. What I would have called “wildcard” searches can be conducted by enabling “substrings.” Searches can be limited using various fields of the metadata (e.g. findspot, object type, material, etc.).

However, given the different languages and conventions used for metadata by the contributing databases, the field limitations are almost more frustrating than they are useful. EAGLE’s organizers recognize the problem, and are working toward a common vocabulary of classification. Topical fields in specific entries link to lists of synonyms; but limitation of searches by such fields is unreliable. Search results appear in a uniform and elegant format.

Texts can be downloaded from the database, but only by registered users (I applied for registration in mid-February and as of September 20 had not received a response).

One of the most novel and auspicious features of the new EAGLE, I think, has been the use of Trismegistos catalog numbers as an index for its entries. Briefly: Trismegistos operates out of the Katholieke Universiteit Leuven; it was founded in 2005 as a database of metadata (not texts) for published papyri from Egypt. It has since expanded to include metadata for papyrological and epigraphic texts from the entire Greco-Roman world. This metadata database, Trismegistos Texts, now includes 723,074 entries. Because EAGLE serves as a portal for many databases, it inevitably includes duplicate entries for some inscriptions. By using the unique entries from Trismegistos as identification numbers for the various inscriptions in its databases, users can collate duplicate entries. (Compare the use of the Claros Concordance by the Packard Humanities Institute [PHI] database of Searchable Greek Inscriptions, which has been reviewed in this space.)

The EAGLE portal, then, is an ambitious project, and a major resource especially for those working with Roman inscriptions. With the expiration of the Europeana grant in 2016, a new group has formed to administer the site: the International Digital Epigraphy Association, or IDEA.

Charles Hedrick has taught since 1990 at UC Santa Cruz, where he is currently Professor in the History Department. His is the author of reviews, articles, chapters and books on topics in Greek and Roman epigraphy, including The Decrees of the Demotionidai (Scholars' Press, now Oxford UP, 1990); History and Silence: Purge and Rehabilitation of Memory in Late Antiquity (U Texas Press, 2000) and Ancient History: Monuments and Documents (Blackwell, 2006).

04/13/2022
Blog: Two Years Later: “Classics” after Coronavirus?
In an April 2020 post for Eidolon, I gathered predictions on “classics after coronavirus.” Two years later, it’s...
04/08/2022
Blog: Ancient Worlds, Modern Communities: Increasing Accessibility for the Study of the Ancient World
The Ancient Worlds, Modern Communities initiative (AnWoMoCo), launched by the SCS in 2019 as the Classics...
03/21/2022
Blog: I Love You, I Hate You: A Student’s Perspective on Learning Latin
I have always enjoyed Latin class because it felt like a puzzle, much like math. Find the verb, find the noun that...
03/18/2022
Blog: Power to Punish and Authority to Forgive: Imperial State and Imprisonment in 4th-Century Antioch
Research ideas often develop out of chance encounters or unplanned circumstances. My dissertation project was born...
03/14/2022
Blog: Sampling Epic in Kendrick Lamar’s “Mortal Man”
Because it’s spirits, we ain’t even really rappin’ We just letting our dead homies tell stories for us....
END_OF_DOCUMENT_TOKEN_TO_BE_REPLACED