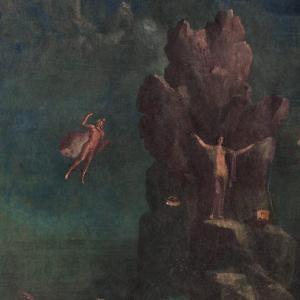 The Scaife Viewer of the Perseus Project pursues a simple goal: to provide a clear and enjoyable reading experience of the Greek and Latin texts and translations of the Perseus Digital Library. It is the first installment of Perseus 5.0 and eventually will replace Perseus’ current interface, Perseus Hopper, as the primary means for accessing the texts and translations of the Perseus library. In its goal to simplify access to Perseus’ repository of texts, the Scaife Viewer is a success. Its layout is uncluttered, its texts legible, its design refreshing. As a result, the Scaife Viewer is a welcome re-imagining of how users read Perseus texts.

Since it is primarily a redesign of the Perseus interface, the Scaife Viewer’s interventions are both functional and aesthetic. Gone are the floating grey text-boxes, the blurry title card, the distracting Unicode-Betacode display preferences, and the rows of patchwork, horizontal browsing bars. The homepage presents the user with two options: Browse Library and Text Search. 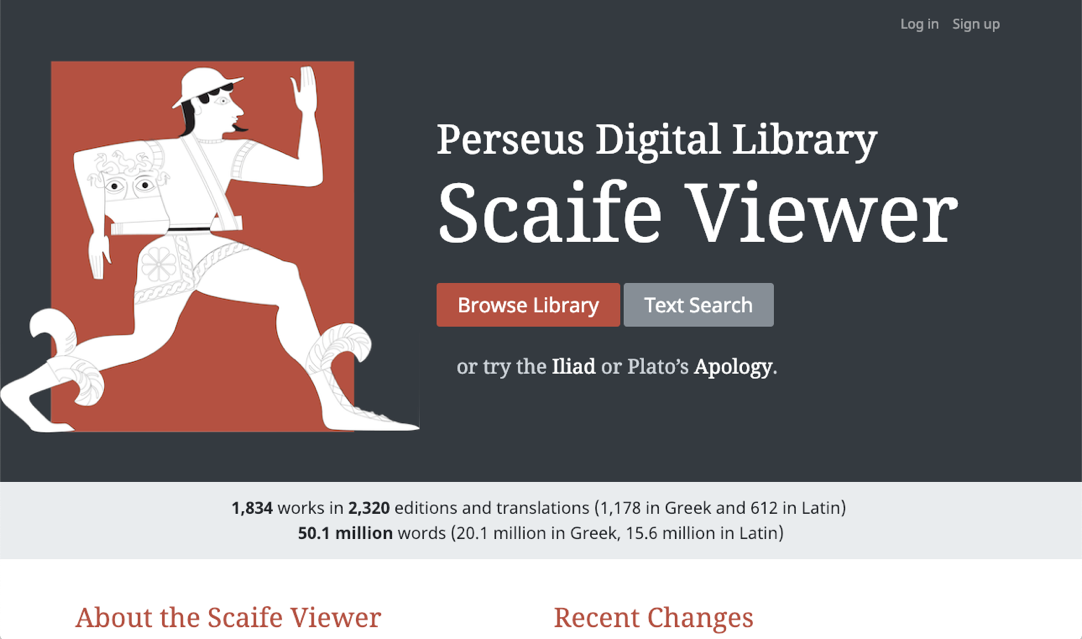 The Browser functions much like Perseus’ previous display of the texts listed by author (called “Text Groups”) then text (“Works”) in a vertical list. This list can be searched by scrolling or by a helpful search bar that autofills possible texts beneath as you type. 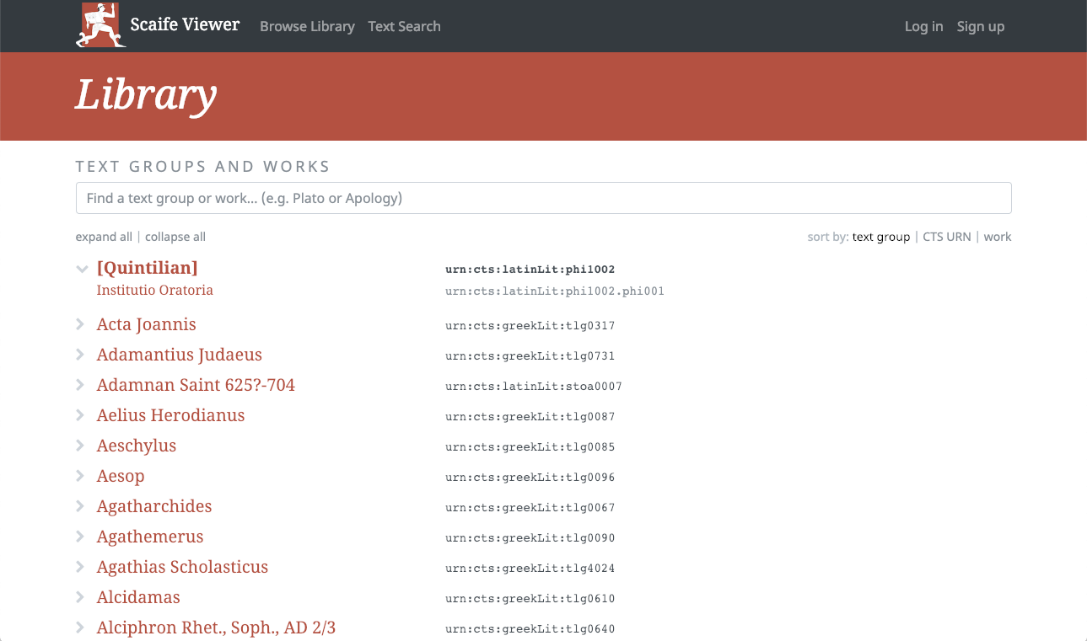 Once the user selects a text and navigates to a line or passage, the main viewer appears. The text stands in the center—black font on white background in accord with the conventions of other longform text readers, such as Medium. On either side, collapsible sidebars present “widgets” that allow users to navigate the text (on the left) and modify its presentation or supply additional information (on the right).

This elegant presentation of the text is the Scaife Viewer most appealing contribution. Collapse the sidebars, and read undeterred; click a word, and use the Morphology widget to parse and the Word List for a quick definition (powered by Logeion). At its best, the Scaife Viewer takes the most appealing design choices of other text interfaces, such as Diogenes, and integrates them with Perseus’ impressive and ever expanding database of texts and metadata. Likewise, users can add a parallel version/translation that extends alongside with the passage. These are easily expandable and resist skeuomorphic fidelity to their printed editions (cf. Helma Dik’s review of the Digital Loeb Classical Library).

The editions of the text are the same as in the previous versions of Perseus. These are in the public domain (e.g., older Loeb editions). As with the Hopper Viewer, there is no apparatus criticus (for the ramifications of this absence, see Ted Gellar-Goad’s SCS review of the Latin Library). Thus, while there are a numerous programming choices underlying the code (see the explanatory video by lead designer James Tauber), the scholarly decisions of the Viewer mainly reside in the choice of widgets that have been included in the sidebars thus far. Most novel is the inclusion of the commentaries from the Center for Hellenic Studies, which currently provides lineated notes when viewing passages of Homer’s Iliad. These widgets will increase in number in future revisions.

The Text Search opens with a search guide, search bar, and options to search by form or lemma (Greek only). 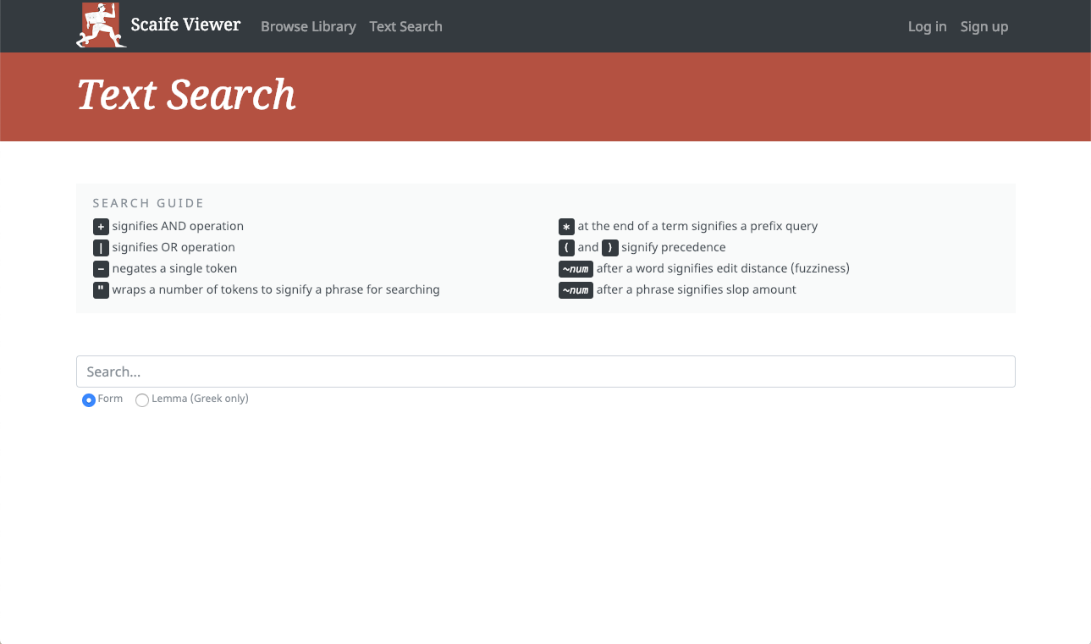 The search guide includes key symbols for more advanced search functions, some of which are intuitive, such as “+ signifies AND operation,” and others less so, for example the opaque though entertaining “~num after a phrase signifies slop amount.” A form search produces a list of instances of a word in a particular form organized as a list of single lines (in no apparent order), or by Text Group. 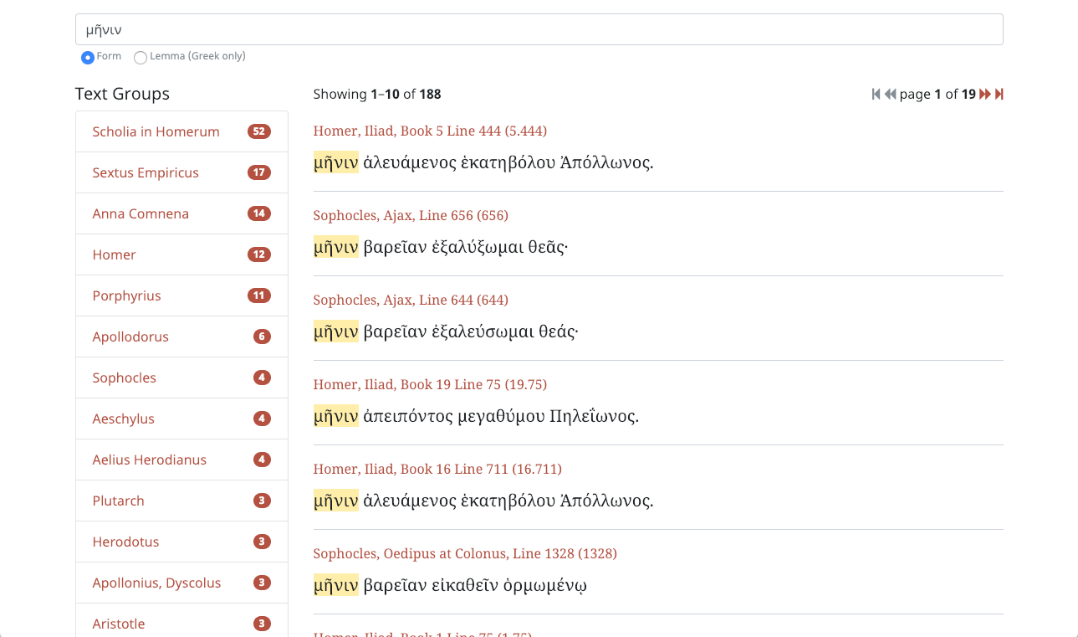 A lemmatized search produces similar results, though somehow a form search for μῆνιν inexplicably produced more results than a lemma search for μῆνις (188 vs. 128).

While the Viewer succeeds in its attractive presentation of texts, unfortunately, at least in its current version, it is plagued by bugs and inconsistencies. Some of the widgets appear to be non-functional, such as the text search in the left sidebar (tested with errors for Hesiod’s Theogony lines 1–30 and Catullus 64, but produced results for Aesop Fabula 1 [ἀγαθὰ]). As far as I can tell, the CHS commentary produces no comments for any text other than books one and two of the Iliad. Latin texts suffer in particular. There appear to be no short definitions of words—a lack that will be especially disappointing to likely patrons of Perseus. Sometimes authors in the Browser produced errors: although I was able to select individual texts of Cicero if expanded, clicking on “Cicero” itself produced an “Error: 500.” (I thought this might be an issue for more copious authors, but clicking “Galen” caused no error.) Likewise, at times the Latin text is un-selectable (tested on passage 131 of Petronius’ Satyricon, though 130 was selectable), rendering the morphology tool useless. For both Greek and Latin texts, the site can be unpleasantly slow to load: at different times it took somewhere from 2.02 to 14.6 seconds to open the Scholia to the Iliad. This lag is perhaps due to the fact (if I understand the site’s structure correctly) that the code of the Viewer redirects to other sites and services for many of its underlying mechanisms, a practice which allows for a greater variety of services but also increases the gates and hoops for the data to traverse before being displayed on a browser. As for translations, the side-by-side texts—one of the more appealing features of the Viewer—at times do not align exactly (tested on Theogony 1–30, whose English continued to line 34). OCR processing may account for this, as well as for the occasional typo, such as the distracting lower case mu of μουσάων (instead of Μουσάων) at line one of Hesiod’s Theogony, an error shared with the Hopper Viewer (although it is uppercase Evelyn-White’s printed edition). These inconsistencies (of which there are more) may have been less disappointing had the site broadcasted itself on its homepage as a “Beta” version or the like. As it is, the site seems more like a bold first step in the right direction rather than a finished product.

Thankfully, the Scaife Viewer operates under the opensource, collaborative ethos of the Perseus project. It is thus continually in the process of revision by users and developers thanks to its robust use of GitHub as a repository of its code. Users with GitHub accounts are encouraged not only to submit their own suggestions for revision but also, if they possess the coding skill, to contribute themselves. On behalf of the Muses, I submitted the lowercase μ in Theog. 1 as an issue. Hopefully Perseus will come to the rescue.

Header image: Wall painting with Perseus and Andromeda in landscape, from the imperial villa at Boscotrecase (last decade of the 1st century B.C.). Metropolitan Museum, New York, accession number 20.192.16. In the public domain.

Stephen Sansom is a Hellenist specializing in early Greek poetry and its reception, especially the poetics of style, meter, and intertext using approaches from corpus linguistics, anthropology, and computational literary studies. He received his PhD in Classics from Stanford University in 2018 before joining Cornell's Department of Classics as a Postdoctoral Associate and fellow in the Active Learning Initiative. He can be reached at sansom@cornell.edu.

04/13/2022
Blog: Two Years Later: “Classics” after Coronavirus?
In an April 2020 post for Eidolon, I gathered predictions on “classics after coronavirus.” Two years later, it’s...
04/08/2022
Blog: Ancient Worlds, Modern Communities: Increasing Accessibility for the Study of the Ancient World
The Ancient Worlds, Modern Communities initiative (AnWoMoCo), launched by the SCS in 2019 as the Classics...
03/21/2022
Blog: I Love You, I Hate You: A Student’s Perspective on Learning Latin
I have always enjoyed Latin class because it felt like a puzzle, much like math. Find the verb, find the noun that...
03/18/2022
Blog: Power to Punish and Authority to Forgive: Imperial State and Imprisonment in 4th-Century Antioch
Research ideas often develop out of chance encounters or unplanned circumstances. My dissertation project was born...
03/14/2022
Blog: Sampling Epic in Kendrick Lamar’s “Mortal Man”
Because it’s spirits, we ain’t even really rappin’ We just letting our dead homies tell stories for us....
END_OF_DOCUMENT_TOKEN_TO_BE_REPLACED